Excessive guilt makes people go into pits of depression that leave them lethargic and practically paralyzed and useless.
aaa

How healthy is guilt and to what extent? Feeling remorse is what helps us repent and reform. But what we often don’t realize is that Satan can take a good thing and turn it into something evil by encouraging extremeness.

“Remorse differs from guilt because there is no implication your transgression indicates you are inherently bad, evil, or immoral…. Remorse or regret are aimed at behavior, whereas guilt is targeted toward the ‘self’.” (Burns 199)

Guilt is a Punishment

Guilt is one of the punishments reserved for the people of hellfire on the Day of Judgment. They will be shown details of their past records, so that they can slap themselves repeatedly for eternity for what they had done.

They made errors, and they had a lifetime to correct those errors, which means they wasted a thousand opportunities for remorse and reform. That is an appropriate situation to feel guilt – eternal guilt. There is no going back now.

Their cry of “ya laytani”, an expression of extreme regret that really can’t be translated, very aptly describes their feeling of guilt.

Guilt hurts, a lot. Now think about our feeling of guilt in this world. What we are doing is inflicting a punishment upon ourselves. Punishing and hurting yourself is not something Islamic in any sense. Self-punishment is used as an atonement for sins only in deviant sects of religions when people go to extremes with their regret. That’s what we see in some countries on the Day of Ashura, and it is highly detestable.

The whiplashes of guilt are not physical but mental, and so they don’t leave any tangible marks on our bodies. But guilt has consequences that are sometimes worse than some physical bleeding.

Guilt is one of the most salient symptoms of clinical depression. Excessive guilt makes people go into pits of depression that leave them lethargic and practically paralyzed and useless.

Why do some people not reform their sinful habits despite feeling guilt?

“You may have engaged in a bad, angry, hurtful action, but it is counterproductive to label yourself a ‘bad’ or ‘rotten’ person because your energy gets channeled into rumination and self-persecution instead of creative problem-solving strategies.” (Burns 200)

Your labeling yourself as a “sinner” or a bad person turns into a self-fulfilling prophesy. It hinders the process of repentance (tawbah).

Also, since no one likes the idea that he or she is a bad person, in order to get rid of guilt and self-accusation, we may go into denial and refuse to believe what we did was wrong. That of course impedes the process of repentance further. 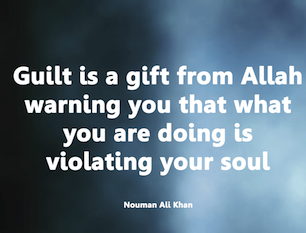 The Right Way to Approach a Sinful Self

It’s inevitable that we will commit sins now and then, because we are weak. That’s what makes this world a test for us.

What should we do when we commit a sin? We saw that it can be counterproductive to punish ourselves with self-cursing. As Dr. David Burns suggests, guilt targets the self. Think of it as the difference between a noun and a verb. If you label yourself with a noun, e.g. “sinner”, it’s making a judgment about what you are like as a person, your inherent quality or trait, or what describes your self.

On the other hand, if you use a verb and say, “I have sinned”, you are taking the focus away from your self and targeting your action, your behavior. A verb is more changeable than a noun. It’s easier to change your behavior than to change your inherent self.

Who was the first sinful human being?

Adam (peace be upon him) didn’t call himself a “sinner”. What we said in fact was the “I have done a wrong against myself”.

They said, ‘Our Lord, we have wronged ourselves, and if You do not forgive us and have mercy upon us, we will surely be among the losers.’ (7:23)

In fact, Allah uses a similar term to describe those who commit sins:

O My servants who have transgressed against themselves [by sinning], do not despair of the mercy of Allah. Indeed, Allah forgives all sins. Indeed, it is He who is the Forgiving, the Merciful. (39:53)

Repentance or tawbah is to acknowledge that you have done something wrong, to feel regret because of your action, to ask Allah to forgive you for that action, and to reform your behavior so that you don’t repeat the same action in the future.

I’ll leave you with the dua that Prophet Muhammad (peace be upon him) called Sayyidul Istigfar (the best supplication for seeking forgiveness). Look closely at the wording of the dua and you’ll see its wisdom.

O Allah! You are my Lord. There is no true god except You. You have created me, and I am Your slave, and I hold to Your Covenant as far as I can. I seek refuge in You from the evil of what I have done. I acknowledge the favors that You have bestowed upon me, and I confess my sins. Pardon me, for none but You has the power to pardon. (Al Bukhari 6323)