Helping each other is so important to our faith that it is one of the five obligatory pillars of Islam. And the Prophet (peace be upon him) said:

“Not one of you can (truly) believe if you do not want for your (believing) brother what you want for yourself.” (Al-Bukhari)

We cannot even consider ourselves believers in Allah and His Prophet until we think of others and do good for each other.

I have learned this lesson intimately. Soon after my shahadah, I was orphaned, unemployed, and friendless. It was as if Allah was telling me all at once:

{Be sure we shall test you with something of fear and hunger, some loss in goods, lives and the fruits (of your toil) but give glad tidings to those who patiently persevere. […]}. (Quran 2: 155)

But it was also as if Allah was showing me that He wanted good for me because so much good came out of this time of struggle. The Prophet (peace be upon him) said:

“When Allah desires good for someone, He tries him with hardships.” (Al-Bukhari)

As a new Muslim in a desperate situation, I was on the receiving end of charity many times. So many good words, helping hands, forgiveness, and financial support has been spent on me by my brothers and sisters that is it hard to only talk about one instance.

However, there is one occasion where a fellow Muslim extended their help to me so willingly and so beautifully that it changed the way I look at the world.

A Meal: There was a time when I struggled to afford the basics, including food. I tried not to complain about it, but people in my community started to notice that I was losing weight. Not knowing what was going on in my life, many people just assumed I was on a diet. But one amazing, young brother was more astute and understood the reality of my situation.

Each Friday after jumu’ah, a family sold plates of food that I was never able to afford. But this brother, would send his plate of food to me, claiming on different occasions that he bought it but it was too spicy, or he was too full, or he was tired of that one type of food. 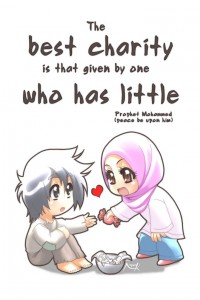 Not only did he feed me, wanting nothing in return, he also made it seem like I was helping him. He could have announced to the world that he was helping me, gaining respect and admiration from others. But he refrained from announcing his charity, knowing that it would embarrass me.

The way in which this young brother fed me inspired me to perfect my Islamic manners. I realized that an action can be good, but also it can be done in a beautiful or harmful way. The Prophet Muhammad said:

“One who does not behave gently is considered to have been deprived of all their good deeds.” (Muslim)

It took several years and a lot of struggle, but I climbed out of financial hardship and Allah put me in a position to learn from my difficult situation and help others.

A Car: A few years ago, I moved back to my home town to be closer to family. As soon as I moved into my new neighborhood, the kind and caring couple next door introduced themselves and helped to carry the heavier furniture in to my new home.

The neighbors and I continued to greet each other as we came and went. I never realized they were having a hard time until they were packing their furniture in to a moving van. When I asked where they were moving to, they confided in me that their home was being foreclosed on.

I felt terrible that I had failed to notice that my neighbor was struggling. In an attempt to make up for my failure to my duty to help my neighbor, I gave them a car I no longer used and that they had previously talked about buying.

I realized that the test of life isn’t over when you feel safe and secure. Ease is also a test to see how we will react to those who need help. I learned that tough times are a test just as much as the easy times. Allah says in the Quran: {Know that your wealth and your children are but a trial and that Allah has with Him a mighty reward.} (8: 28)

Charity is an obligation, but it is also an opportunity given to each of us. Whether we are giving or receiving, Allah has put us in these positions because He is trying to refine us and make us better people, to perfect our manners, to gain empathy, to gain humility, to soften our hearts.