We are fortunate to have the fiqh works of the four madhabs preserved today. This rich heritage has benefited thousands of lives over the centuries and there’s no reason that it should stop today.
aaa

I felt a heavy responsibility on my shoulders. It was during my college years- stopping at a mosque nearby to pray- when a person blurted, “You will be questioned in the grave about choosing one of the four madhabs (Schools of Thought)”. He then whisked away.

“How does one pick a madhab?”, I wondered. Is it by random or do you have to study each one then select the most appealing one?

I had just bought all 9 volumes of the rarely found Sahih al-Bukhari in New York at the time. It was like having a treasure. My evenings were spent engrossed in its chapters, mesmerized by the amount of details recorded about our Prophet.

I knew about the Quran. I recently learned about hadith- now there’s a madhab one must choose? Is there a book for each one? If they are all from Islam, why are they different? How are they all correct, if they have diametrically opposing viewpoints on certain issues? These are questions that would puzzle me in trying to understand the role of madhabs.

It became apparent early on that people of certain geographies would promote certain madhabs. Maliki- if African, Hanafi- if from the sub-continent, Shafi’i- if from South-East Asia, Hanbali- if from the Arabian Peninsula. If the choice was to be based on geography, what should an American choose??

On one side there was the opinion that one must blindly follow one of the four madhabs and should never depart from it. Studying in a business school at the time, the idea of blindly submitting to an entity with no exit strategy made me uncomfortable. On the other side, there was the view that madhabs were not needed at all since the Sunnah of our Prophet is preserved. This sounded more appealing since it made the Sunnah an authority.

Scholars, throughout the centuries, worked tirelessly to understand fiqh and record it- could we just discard this rich history of knowledge? Did Islam call for the door of ijtihad to be shut- where the use of the intellect would be discouraged in fiqh? There had to be more to this.

These questions and others made me embark on a journey to learn more from where it all started- Makkah. After years of exposure to the classical texts and scholars of different madhabs, it became clear to me that the two popular views on the madhabs were actually simplistic views being misapplied.

I was shocked to learn that when Imam Malik had the opportunity to make his fiqh the law of the land, he refused. I was equally surprised to learn that Imam Abu Hanifah and Imam Shafi discouraged people to follow their opinions when it went contrary to the Hadith of the Prophet. Here are some of their statements:

Imam Abu Hanifah: “If a hadith is found to be authentic, then it is my madhab.”

Imam Malik: “Everyone after the Prophet will have their statements accepted or rejected

Imam Shafi: “Every hadith of the Prophet is my position even if you did not hear it from me.”

Imam Ahmad: “If one rejects a hadith of the Messenger of Allah, they will be at the brink of destruction.” 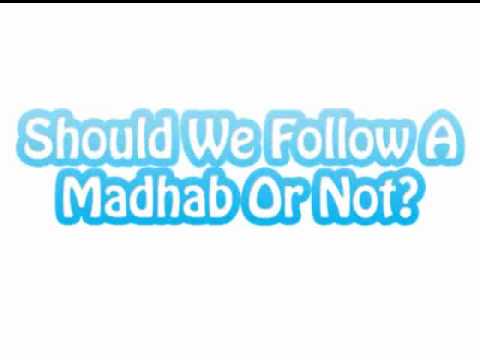 It is also interesting to note that in our rich Islamic history there were not just four madhabs. There were giants who had madhabs like Imam al-Layth. These madhabs did not gain popularity because their students did not widely spread their Imam’s teachings as did the students of the four madhabs. Nevertheless, these “lost” madhabs were no less beneficial.

We are fortunate to have the fiqh works of the four madhabs preserved today. This rich heritage has benefited thousands of lives over the centuries and there’s no reason that it should stop today. However, our relationship with a madhab changes based on our gradual development and understanding of fiqh.

For those beginning to learn fiqh, it’s very important for them to understand the cases of fiqh and visualize them. This is easily accomplished by studying fiqh under the guidance of a madhab. Some of the questions necessary for a beginner to answer before moving forward in fiqh would be: What are the forms of purification? What are the conditions of salah? What are the pillars of a business transaction?

The famous scholar, Ibn Qudamah, has written his fiqh books with this reader progression in mind. His book for the beginners, “al-Umdah”, lays out the cases and issues of fiqh. The next book, “al-Muqni”, is a step up allowing the reader to understand that the madhab can have two positions on one issue. The progression continues with, “al-Kafi”, which presents the issues and cases of fiqh along with their evidences. The last in this progression is “al-Mughni” which includes the difference of opinions between madhabs.

Keeping in mind the reader or the audience, we can sum up one’s relationship with a madhab in the following categories:

1- The Layman: A person who does not have the tools to understand fiqh or learn it

in a progressive manner. This person has no choice except to blind follow a madhab. Allah mentions this category of people by saying: {So ask the people of the message if you do not know.} (Quran 16:43)

2- The Student of Knowledge: Depending on the degree of progression of this student of knowledge, the student will combine blind following with research to arrive at conclusions. As the student’s knowledge, comprehension and research increase, the blind following slowly diminishes. Allah mentions the next phase to include research and evidences: {So ask the people of the message if you do not know. With clear proofs and written ordinances} (Quran 16:43-44)

3- The Scholar: This person has the necessary tools to derive fiqh rulings and is not allowed to resort to blind following except in extreme and urgent cases. Allah describes the scholars as having the ability to draw conclusions: {But if they had referred it back to the Messenger or to those of authority among them, then the ones who [can] draw correct conclusions from it would have known about it.} (Quran 4:83)

With the progression outlined previously, the authority of the Sunnah is maintained while allowing others to benefit from the great works of the madhab.