Did you walk out of your mother’s womb?

Do you know anyone that did?

It takes time to learn to walk. You start out by wiggling around, then crawling, then walking by holding on to something, then standing and walking on your own. It is a learning process.

Life is a constant state of learning that all mankind must go through to get anywhere. You can’t get anywhere by just laying on your back.

Obtaining knowledge is essential to the growth process in all aspects of one’s life. We learn the basics as a child about how to do things, language skills… to develop and grow.

What about gaining knowledge to prepare yourself for the Hereafter?

Seeking knowledge in this life and putting that knowledge into practice not only helps one progress in this life, but also allows one to obtain bliss in the Hereafter. It is also obligatory upon all Muslims to seek out knowledge.

How can you expect to pass the test of this life to get the rewards of heaven if you don’t study in preparation for it? If you are not prepared, you will be going through life just guessing away at things, not really knowing if it is good for you, and just hope that it is. 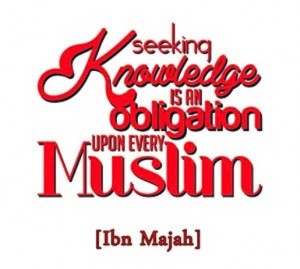 Without knowledge, you can lead a very bleak and long path that puts you off track in the blink of an eye. You may fall into a hole of despair, or temptation, or worse fall into shirk without realizing it.

Did you know the first word of revelation of the Quran was “iqra!” meaning to read or better defined as to recite?

Allah gave us revelation to learn from, and to put into practice to achieve the best in this life and the Hereafter. It is the simplest of instructions, yet so few do it!

Simply being a Muslim will not make you knowledgeable. You must read! You can hold a book day in and day out, but the contents of the book will not soak into your body and go to your brain on its own… it takes effort on your part!

Practice What You Preach

What good is knowledge if you never use it?

It is a wasted cause if you learn something and never use it. Guard it, and implement it in your life.

Great is hatred in the sight of Allah that you say what you do not do. (Quran 61:3)

Benefiting others with your knowledge comes with tremendous rewards. Knowledge is something that is easily passed on to another person, and from them, to another.

Imagine the good deeds you rack up by sharing beneficial knowledge that gets shared for generation after generation. You will be piling up those good deeds even after your death! Subhanallah.

When a man dies all his good deeds come to an end except three: Ongoing charity (Sadaqah Jariyah), beneficial knowledge and a righteous son who prays for him. (An-Nasa’i, 3651)

When a person neglects seeking knowledge about their religion, they will fall into many errors by following in the footsteps of their forefathers’ practices and traditions. 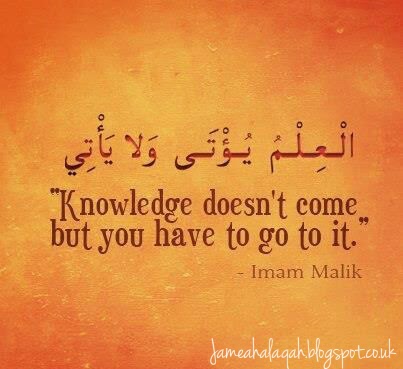 “The importance of seeking knowledge is to keep us from becoming prey to deviation.”

New Muslims fall victim to their own ignorance because they tend to accept anything and everything they are told by Muslims these days.

I had shared a bit of information to a new Muslim that something she was saying was incorrect, and she stated that she trusts her friend that was born a Muslim, which just shows how the cycle of ignorance grows.

Being “born” into a Muslim family doesn’t equal intelligence. Many people just do what they were taught by their parents blindly. Those who haven’t taken the time or effort to educate themselves about Islam continue this rut for generations because it is part of a culture and not Islam.

And when it is said to them: “Follow what Allah has revealed,” they say, “Rather, we will follow that which we found our fathers doing.” Even though their fathers understood nothing, nor were they guided?” (Quran 2:170)

…Allah will raise those who have believed among you and those who were given knowledge, by degrees… (Quran 58:11) 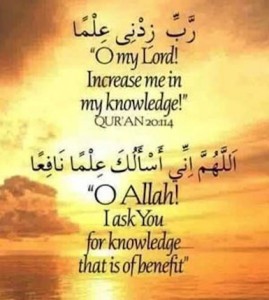 …Whoever follows a path in pursuit of knowledge, Allah will make easy for him a path to paradise… (Muslim, 2699)

Gaining knowledge raises your status. But those who share it are given a higher status than even the devout worshiper. One is raised so much so that even the ants and the fish supplicate for those who spread their knowledge to others.

Don’t be selfish with knowledge – sharing is caring! It is incumbent for all Muslims to share knowledge, and that keeping knowledge to oneself is a disservice to humanity.

I’ve read numerous accounts from new Muslims that have stated that they knew Islam was right from just one piece of information shared with them.

One crucial bit of information can lead someone to their shahadah, so don’t miss that opportunity.

By Allah, if a single person is guided by Allah through you, it will be better for you than a whole lot of red camels. (Al-Bukhari and Muslim, 4)

The Roads of Paradise Are the Roads to Knowledge

If anyone travels on a road in search of knowledge, Allah will cause him to travel on one of the roads of Paradise… The superiority of the learned man over the devout is like that of the moon, on the night when it is full, over the rest of the stars. The learned are the heirs of the Prophets; and the Prophets leave neither dinar nor dirham, leaving only knowledge, and he who takes it takes an abundant portion. (Abu Dawud, 3641)

If you choose to remain ignorant, out of laziness, or lack of interest, you will face a bumpy road in this life and the next. How would you know which path to take? How would your children find their way?

Don’t let yourself be fooled by all the misinformation out there about Islam. Only those who have knowledge fear Allah. So if you’re intentionally avoiding obtaining knowledge, you will be riddled with the disease of ignorance.

“Ignorance is a disease that can only be cured by acquiring beneficial knowledge!”

Dua from the Quran: