I’m half Moroccan and half French and I have been wearing hijab since 18th April 2010.

It was one of the most important decisions of my life. A piece of cloth does not define a person but I strongly believe that appearances do have some say, if not much, about a person.

I’m very independent. It is one of my most obvious traits. So when I started to think about wearing hijab, I didn’t wish to be influenced by anyone that is why I did not tell anything to my family or friends. It came as a huge surprise to them when I first wore it and luckily I was positively surprised by their reaction and that of neighbors.

On my first day as a hijabi, I went to visit a friend. I met only French and non-Muslims on my way Subhan’Allah (Praise be to Allah) who smiled and greeted me in their usual lovely style.

Hijab really changed my life but as a person, I was just the same. Men (Muslims and non-Muslims) started looking at me differently. They weren’t shy but they gave me much more respect.

The most important aspect of hijab is that it continuously reminds me of who I am and what I want to be! Being a Muslim in the 21st Century and that too, in France is very challenging. You’ve got to be really strong.

Despite all, hijab is my identity, my strength, and my pride. When life gets hard and destiny sends me far away from my family and my friends, my hijab gives me self-confidence and reminds me of my principles and convictions.

It reminds me that Allah is always watching over me with love and trust. It reminds me of the Prophet Muhammad (Peace be upon him) and his exemplary behavior. 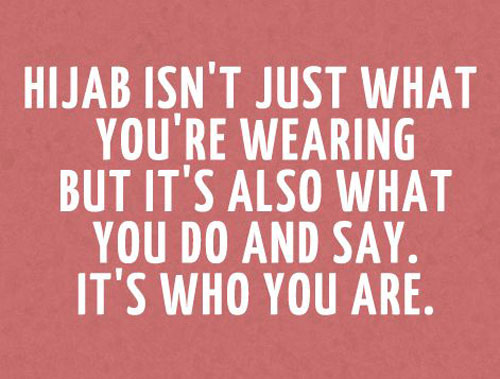 The best feeling of wearing hijab is when you don’t notice it as something awkward and neither do others.  So I love it when people act normally instead of making a big deal out of it because after all, I’m just like any other woman.

I don’t think or pretend to be better than others because of my hijab. I’m just trying to be a better version of me with every passing day.

My hijab is a big part of my personality but it is only between me and my Creator and I am only accountable to Him.

I ask Allah for the guidance of the whole Ummah and humankind.