We all have our weak moments, and Shaytan lies in wait for us 24/7 to catch us in these moments of weakness.
aaa

{O you who have believed, enter into peacefulness, the whole (of you), and do not ever follow the steps of As-shaytan; (The all-vicious, i.e., the Devil) surely he is an evident enemy to you.} (Quran 2:208)

Imagine you’re on top of a mountain. Someone whispers, “Jump!” Of course you won’t listen. But imagine if the whisperer says, “There’s a large bag of gold coins just a few feet below you,” or “The person you love dearly is waiting for you a few feet below,” then you might be tempted to try to go down a little way. But once you set your body in downward motion, gravity pulls you on, and it’s difficult to stop.

When we’re at the top of our imaan, Shaytan can’t touch us. Allah says:

{Indeed, over My [believing] servants there is for you no authority. And sufficient is your Lord as Disposer of affairs.} (Quran 17:65)

At this point, all he can do is whisper. He knows our weaknesses extremely well, and tries to incite them by promising us instant gratification.

{[Iblees] said, ‘My Lord, because You have put me in error, I will surely make [disobedience] attractive to them on earth, and I will mislead them all; except, among them, Your chosen servants.’}  (Quran 15:39-44)

And he doesn’t whisper the same thing to everyone.

“Shaytan flows in the son of Adam like blood flows.” (Al-Adab al-Mufrad)

So he tells the one who has a thing for money: “I promise you one thousand dollars if you just try your luck, just once, at the casino.” Now, the stronger his belief in the Judgment Day and Hellfire, the harder it will be to incite him.

But we all have our weak moments, and Shaytan lies in wait for us 24/7 to catch us in these moments of weakness. In these moments, Hellfire seems a vague, dim reality in the very distant future, and the money is right here waiting for us to grab, and, after all, we can repent at any time, right? Of course we can. 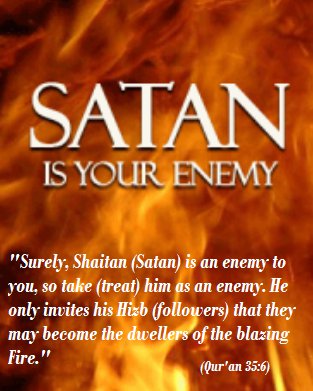 If we don’t die in the meantime, that is.

So once, in a weak moment, our money-lover tries his “luck” at the casino, he falls prey to Shaytan and gets stuck in a downward spiral. Of course, Shaytan’s promises are false, and he will lose at the casino whatever little money he has. But that won’t make him stop, instead Shaytan will urge him to recover the money by playing just a few more turns. So now he starts taking loan from people for gambling, which has by now become an addiction without his realizing it.

{I had no authority over you except that I invited you, and you responded to me. So do not blame me; but blame yourselves.} (Quran: 14:22)

This guy is now totally in the grasp of Shaytan and does whatever Shaytan orders him to do. And it is about people like him that Allah said:

Okay, so does that mean he’s a goner?

Of course not. The good road remains open until he dies.

Remember the story of Umar. He was immersed in sins and disbelief, until he heard the verses of Allah. Then he completely about-turned and became such a strong believer that the Prophet said:

I certainly see the devils of jinn and mankind fleeing from Umar. (Tirmidhi, qtd. in al-Ashqar)

Remember, no matter how much power Shaytan might gain over us, the plot of Satan has ever been weak.

Who could be stupider than the one who had been so near Allah, who had seen the unseen, placed among the angels, and then threw it all away just because he had to do a prostration? Are we then afraid of such a stupid person?

Allah guides to His mercy whomever He wills. He is able to do anything. So let us return to Allah with sincere repentance again and again, and strive to believe like Umar.

{. . . O My servants who have transgressed against themselves [by sinning], do not despair of the mercy of Allah. Indeed, Allah forgives all sins. Indeed, it is He who is the Forgiving, the Merciful.} (Quran 39:53)

Republished with kind permission from http://understandquran.com