“She was intelligent, honorable, devoted, virtuous and generous. She is from the people of Paradise. The Prophet used to praise her above the rest of the Mothers of the Believers.

That is how Imam Al-Dhahabi described our Mother Khadijah.” (Abu ‘Aziz 511)

She is one of the four best women in the world. And she was Prophet Muhammad’s first (and, in her lifetime, only) wife, and she was also the first Muslim. She was sent special greeting from Allah, conveyed by Angel Gabriel who added his own greeting too. Thus, she was given the glad tidings of a golden house in Paradise in her lifetime.

She is our Mother and we are proud of her.

Daughters learn homemaking from their mothers, whether they actively teach them or not. Our mothers are our role models that we follow when we start our own family. And our Mother Khadijah is the best role model for us to follow.

Here are some of the virtuous traits in Khadijah that became manifest in her relationship with Prophet Muhammad, and what we can learn from them.

Being Like Khadijah – Some Traits of a Good Wife

Our Mother Khadijah rejected several proposals of marriage before she finally married Prophet Muhammad (peace be upon him).

Just getting married wasn’t her goal, nor was it just money or lineage. She wanted a virtuous husband, and she was not going to compromise in her choice. And Allah sent her the man who could win her pure heart. Prophet Muhammad (peace be upon him) had the virtues that she valued the most in a husband.

Making a wise selection is a crucial first step towards being a supportive and loving wife, because you can only truly love with all your heart a person whom you admire and respect, not a person who has millions nor one who has a famous dad. 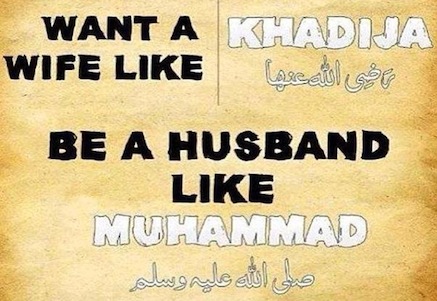 Imagine having a surprise encounter with a strange creature as vast as the sky. You’ve never seen the likes of this creature before, or even imagined such things can exist. What do you do? How do you feel? Shocked, terrified, weirded out?

Such was the encounter of the Prophet with Angel Gabriel in his true form. And whom did he go to for support after this shocking encounter? Not to his best friend, Abu Bakr, nor to his uncle, nor to a doctor, nor to a spiritual leader. He went to his wife.

“… and he informed her of the incident, saying:

‘I fear for myself.’

She said to him: ‘It can’t be. Be happy. I swear by Allah that He shall never humiliate you. By Allah, you join ties of kinship, you speak the truth, you bear people’s burden, you help the destitute, you entertain guests, and you help against the hardships which affect people.’” (Ibid. 514-515)

Her response makes it clear why he sought her out in his need of psychological support. It’s kind, loving, and positive.

A wife should possess certain qualities to make her the pillar of support in his times of distress – empathy, optimism, warmth, a generous heart, a loving nature, like a mother.

3- She is a Wise Counsel

Khadijah didn’t stop at consoling the Prophet. She gave him the best advice – ‘go to Waraqah ibn Nawfal, an old scholar who was an expert in this sort of stuff’. Waraqah listened to the whole incident, explained it to the Prophet and even predicted what would happen in future.

Be a well-educated and up-to-date Muslimah. Take interest in things that matter. Especially study topics that interest him. And when he needs it, be ready to share with him your ideas that aren’t silly girly remarks but wise, well-informed observations.

4- She is Someone to whom Sacrifice is Second Nature

The Prophet said about her:

Despite suffering the whole life after revelation started on her husband – social stigma, loss of wealth and finally social boycott and extreme hunger – her respect for her husband never wavered. She remained a pillar of strength for our Prophet until her death.

Have faith in your husband. Never let hearsay affect your trust on him. Be patient through his adversities and trials. Even if the whole world turns against him, be his pillar of support, just like Khadijah.