Having to write an article about faith, I decided to poll my children and ask them what was faith and what I, as a parent, can do to help them reach the level of Yaqeen, or better still what more could I have done.

While some of their answers left me contemplating, a few conclusions were made on hearing their definitions to what was a rather difficult question.

We sometimes face much confusion about faith today with all that’s going on in our lives. It’s like having a computer and knowing its potential but not having a clue how to use it.

Many of us know how frustrating that is. One of the areas about faith that gives us the most trouble is the concept that we have to in fact acquire more faith and that some people have much faith, while others have virtually none. One way to strengthen our faith as Muslims is to turn back to what my children said I described as our manual, the Quran, with its detailed instructions and not just read it but study the many examples given to us where faith has helped many Prophets face their many challenges.

Hardship is Followed with Rewards

Faith in the context of Islam is very defining for us as Muslims. It places us in what can be described as a ‘belief framework’ that develops into a way of life and provides its own unique system of logic to explain the phenomena of life around us.

Faith in God enables us to be thankful for the blessings we have been showered with, and to be patient in times of difficulty, since as mentioned before we believe that nothing can happen without His will.

The Quran also refers to people who wish to see something visible or tangible in order to believe.

{They say: ‘Why is not an angel sent down to him?’ If We did send down an angel, the matter would be settled at once, and no respite would be granted them therefore, the whole point of having faith is to believe in something unseen.} (6:8)

Faith and yaqeen (certainty) define our relationship with God; we have true certainty in our hearts, we train ourselves to see the wisdom in His dealings and indeed as a result we will have contentment.

The Quran is replete with stories of faith and yaqeen, take for instance Prophet Ibrahim who was indeed a model, devoutly obedient to God true in faith, and he did not join Gods like those before him despite the many confrontations.

{Follow the ways of Ibrahim the True in Faith, and he joined not gods with Allah} (16:123)

{And in his testimony of faith when he said to his father and his people, “Indeed, I am disassociated from that which you worship except for He who created me; and indeed, He will guide me.” And he made it a word remaining among his descendants that they might return.} (43:26-28)

Tests and Levels of Faith

It is important that we as Muslims step back regularly and analyze our true level of faith. I have continued to teach my children that during any challenges, turn to God and no one else and to never underestimate the power of prayer. Armed with this, I then remind them that the Quran ‘our manual’ promises that verily after hardship comes ease.

Our faith is tested during these times but not without reward. After all God is with those who are patient and who have complete faith in Him. It is His divine plan and we must succumb to His will. Not only does He know best, He may be giving us a blessing in disguise.

During these trying times we are living, I remind my children that God chose them to test their faith telling them that whatever pain we are feeling, physical or emotional, is temporary and everything is from God.

Another beautiful story regarding faith is that of Prophet Yusuf’s father. His faith that he would see his son again despite all odds is inspiring. As a parent, Yusuf’s father suffered through the disobedience of his sons but remained involved in their lives with a mission to rekindle their faith and continued to call his sons to submission and repentance through a relationship tempered with mercy and patience. Faith played a large role and the certainty in God’s mercy is definitely admirable. A lesson one should learn. 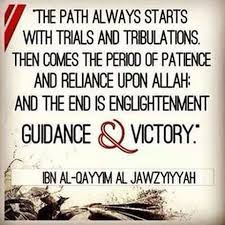 It is rather comforting to learn that the stronger the faith, the harder the test, and the greater the reward. When we as Muslims are afflicted with a severe calamity we should take comfort from the fact that those who have strong faith are given the harder trials. This is established by Prophet Muhammad, when asked about who suffers the greatest afflictions, he replied in the famous hadith:

A man is afflicted in keeping his religion. If he is firm in his religion his trial is severe, but if there is weakness in his religion it is made light for him, and it continues like that till he walks on the earth having no sin.

When we submit, a mere declaration or display of belief will not be taken for success, our heart and soul will for sure be put to test and God will see whether our faith, trust, and love of Him is unconditional or is it conditioned with good health and a comfortable life free from stress and anxiety. This is a major truth that will totally change our attitude and the results that our faith produces. Most people don’t doubt that faith works. They just doubt that they have enough faith to get the job done.

When troubles come our way, we should consider it an opportunity for great joy. When our faith is tested, our endurance has a chance to grow. So we should let it grow, for when our endurance is fully developed, we will be perfect and complete, needing nothing but this faith to keep us going to follow God’s plan ultimately reaching our true destination; the Hereafter.

Remember when the going gets tough the greatest act of faith some days is to simply get up and face another day with full acknowledgement that Islam is nothing more than submitting to the will of God.