I believe in God and know He is fully capable to do all things; He is All-Knower, All-Powerful.

“I am such a tiny spec of God’s creation and He is surely able to respond to my supplications, but He does not! Why?

Has He abandoned me?

Or does He simply not care?”

Does this sound familiar?

Dear respected reader, if you have asked similar questions, let us examine the response together.

Given that you do believe in the existence of God, you must know that most of your dilemma is already solved. By simply expanding your view and consciousness about your Creator you can find the answer, if you truly and seriously want an answer!

So, let us take the first step and ask you one simple question. Besides believing in God’s existence do you also believe that the Quran is the word of God, preserved, unchanged and revealed for all mankind and all times? If you have any issues with any of this, we suggest to stop for some reflection and before moving on to please read this: (Authenticity of the Quran)

Do you now have the sense that the supreme Creator that you believe in could only be called Supreme, All-Powerful and All-Merciful that after He created humans, He would leave guidance for them in such a way that they could access it and understand it?

Did He not do that through sending a succession of messengers and scriptures? Was Muhammad not His last messenger with the final uncorrupted scripture – the Quran?  If the answer to all these is in the affirmative, then let us see how Allah Himself responds to your question above.

We now read His words with a different conviction than before. It is the Almighty talking to you now. This is not a book of philosophy or advice. It is a Divine Book from the Creator of the heavens and the earth and all that is between and around them. So, please pay close attention here!

First He would like us to know how close He is to us. To even think that God does not hear you or know about your thoughts or needs, should be reversed and replaced with the idea that, yes, He is very close to me indeed.

Then He informs us that He will, in fact, and without a doubt respond to our supplications. You will ask: “If this is the case then, why are my supplications not answered?”

Well, let us stop and take another look at the verse above. It seems that the pre-requisite of answer to supplications is right in front of us: {So let them obey Me and believe in Me, so that they may be led aright.}

Are we doing the second part? This may take a thorough examination of our lives, actions, thoughts and behavior and make certain adjustment as to bring ourselves under the umbrella of God’s protection and gain His Mercy so that we are responded to by Him, as we respond to His call. 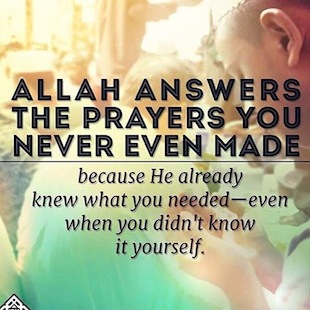 What if you do all this and still your supplications are not answered?

We are informed by Prophet Muhammad (peace be upon him) that if a supplication was not answered in this life, then, Allah is either going to answer it for you on Judgment Day when you need any help desperately on that day, or that Allah will remove a distress, misfortune or suffering that might come along with answering and thus this favor is much greater than answering the supplication itself which may bring you harm.

Your situation may fall into any of the above categories and yet there might be another element involved that could easily be overlooked by many.

There are times that we, as humans, supplicate to our Creator for something, and at the same time, we have our minds so made up that the answer should be coming from a certain direction. It is very possible that Allah does in fact respond, and opens the right door for the person to enter, but this person does not like this door and is looking for another door more suitable to his/her taste or desire. He simply does not see any of the open doors. The end result is doubt and suspicion about the Creator’s caring and ability to answer, which is the greatest and highest form of disrespect toward one’s Creator.

This reminds us of a story of a Muslim sister who was supplicating for a specific kind of man to marry, who was appealing, intelligent, had a good job, great family status and kind. Religion was at the bottom of the list and not important to her. But she had a very good heart and did believe in Allah.

Allah sent her in many cases men who were pious, kind and honorable, but lacked other requirements. The sister would reject them because they did not fit her specific requisites, not realizing Allah was choosing what was best for her.

She was then sad that Allah had not responded to her supplications for many years.

The first step toward aligning oneself with the Divine methodology of supplication is increasing one’s faith.

Let’s say one really desires to be a surgeon but has only completed high school. He should take the next step to study the general pre-requisites, then pre-med followed by general medicine and finally surgery. If one tries to understand the intricate details of surgery prior to having studied the required courses, he would set himself up for failure, frustration and disappointment no matter how smart he thinks he is. He simply cannot jump to final destinations before taking prior steps to learn about the sciences related to the field.

This person may be frustrated when asking and not understanding the right answer from his university professor about the details of the chambers of the heart, for example, not realizing that this course is taught 4 years later.

So, let us take the table around. We would like Allah to answer our calls, but what about us answering His call? Did we ever think about that?

Answering God’s call means worshipping Him the way He has ascribed to us. We come to know this only thought His Book as well as sayings and actions of His blessed Prophet Muhammad.

The believer knows the unstable and worthless life of this world compared to that of the Hereafter.

Lastly, a believer must remember that all his actions in this temporal world as well as his supplications must not include any harm to others. He enjoys and supplicates for what is lawful and shuns the unlawful. He lives in peace and tranquility and awaits a much greater and everlasting life in the Hereafter.

{But seek, with that (wealth) which Allah has bestowed on you, the home of the Hereafter, and forget not your portion of legal enjoyment in this world, and do good as Allah has been good to you, and seek not mischief in the land. Verily, Allah likes not the Mufsidûn (those who commit great crimes and sins, oppressors, tyrants, mischief-makers, corrupts).} (28: 77)