I want to share with you a small reflection from one of the very beautiful passages of chapter 17 of the Quran – Al-Isra’. Allah says:

Establish prayer at the decline of the sun [from its meridian] until the darkness of the night and [also] the Qur’an of dawn. Indeed, the recitation of dawn is ever witnessed. (Quran 17:78)

Establish prayer from the sun starts getting and it starts sinking, meaning around Maghrib time, you make sure you pray maghrib exactly on time, all the way at the end towards when the sun is completely gone and it’s the depth of the night…when it came to Fajr, He didn’t call it Fajr prayer, He says the Quran of Fajr.

Well, one of the benefits of that is of course that we should recite extra Quran at Fajr. But there is something special about me, as a person, as a Muslim developing a relationship with the Quran especially at Fajr.

So the advice I give myself and the advice I’m sharing with all of you is that if you can make Fajr institution in your life, set time aside for making good Fajr prayer. Go and make the prayer in masjid… you sit there and recite Quran a little bit, you can dedicate that time and make that a time in your life and you will notice the spiritual benefits and the worldly benefits of doing that immediately.

Allah says that the Quran of Fajr is such a witness, it’s such a beautiful thing to say because the word mash-hud means that which is witnessed so the recitation of the Quran, the prayer that you attended in Fajr is witnessed.

The questions is, it is witnessed by who? 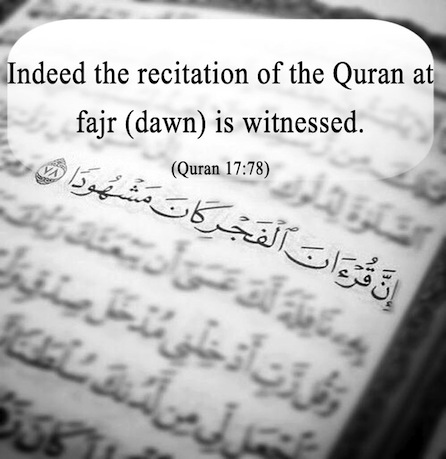 You know, that’s an hour of the day when most of people are asleep, so even if somebody is walking or driving to the prayer nobody sees them but Allah says that’s the time that is witnessed.

Usually the things that are witnessed are at the middle of the day, popular times, popular places… but the masjid is not a popular place at Fajr time, not most of us, it’s not when we see a lot of people around you. But Allah says no doubt about it, it is witnessed.

It is witnessed not by other people who are sleeping, not by people of heedlessness but rather by the angels that are recording our deeds, rather by Allah Himself who is making note of these slaves that are coming and leaving their sleep for Himself and His word.

So this is very powerful thing. And so tied to this advice for myself again and for all of you if we can make a really good habit of going to sleep early.

If you make a real habit in your life of going to sleep early and as a result waking up early and really having the Quran of Fajr being given.

The Quran of Fajr is one of the few idafah (emphasis). I don’t know of any other emphasis in the Quran except ‘it’s recital’…the word Quran is associated with something else like this with this kind of construction except with Fajr.

I pray that I’m able to take advantage of that and all of you are. I know I’ve experienced this personally in my life and I can guarantee you experience it for yourself once you make a habit out of this or try to implement it even a little bit, you will start seeing its benefits immediately.

So I pray that Allah makes us of people of the Quran and people that are really able to take advantage of the time that Allah offers His special assistance to us and a special blessings to us.