The prayer positions which I was so worried about were not that difficult at all.
aaa

I am a convert to Islam and have been a Muslim for a very long time. Sometimes I think back to before I embraced Islam and realize that though certain aspects remain the same, Islam has brought tremendous change to my life.

I guess I was always a good human being — charitable, kind to people around me and cared about their worries. Islam however brought a direction to my life.

Through Islam, I knew why I had to be good. There was now a purpose for my creation that I could comprehend and fall back on. I and all of creation are created for a simple reason which is to worship our Creator. Everything else is secondary, a worldly test that we have to pass.

And so now I together with the rest of Creation — the angels, the oceans, the animals, the flowers and the universe — unite in our worship of Allah.

We sing His praises with our voices rising together in a magnificent crescendo or sometimes we praise Allah by ourselves in the silence of our hearts, deep inside our souls.

Also we pray as well and if you concentrate hard enough, these prayers and praises can be heard in the roar of the ocean, in the twitter of the birds and in the beating of hearts. 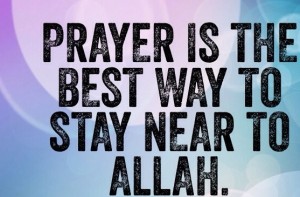 As Muslims we lead our life to a pre-determined routine, ordained by Allah and that revolves around our Salah (ritual Prayer).

We awake with the birds, before dawn to offer our Fajr prayers (Dawn Prayer); and we sleep only after offering our Isha prayer (Night Prayer).

Then we take breaks from work or study to offer Zuhr prayer (Noon Prayer) and Asr prayer (Afternoon Prayer). And at sunset we hasten so that we do not delay our Maghrib prayers (Sunset Prayer) we must pray before twilight fades away!

Our purpose in life is to worship our Creator and to sing His praises and Salah is what He recommends.

Today after so many years of praying it seems easy – almost second nature, but there were times when I found it tough. Learning the Arabic chapters that constituted my prayers; remembering their order; fitting the five prayers into my schedule.

This seemed too much to accomplish, even the prayer positions were tough. But I had embraced my new way of life and Islam was my choice! I knew that my prayer was one of the five pillars of my new faith. And I had to make efforts, I had to strive and I had to learn.

I got my Mom (who had reverted a while before me) to write the prayers, in English, in my school diary. I barely listened to what my teachers were saying and by the end of that day I knew my prayers. By the end of the week I knew them well. I could now pray – first hurdle tackled!

The prayer positions which I was so worried about were not that difficult at all. When people four to five times my age could pray I was a nut to be complaining. So this meant a second hurdle was now out of the way!!!

I had begun to pray but the most important hurdle still remained – how was I going to fit so many prayers into my schedule? I was in my last two years at school, so I had to work hard which meant I had to do homework and study when I got back home.

And I had to take an afternoon nap as well, talk to my friends on the telephone, eat, and watch my favorite TV programs, I was such a busy girl!

And in the middle of all of this I had to pray as well. Was this because it was too difficult for me to adjust to my new life style or were these simply evil thoughts from Satan? I guess we know the answer to this one.

And I admit that for a long time I was a naughty girl – though I began to pray, it was only once or twice a day. I slowly graduated to praying three times a day – missing Fajr and Isha regularly.

This went on for a long time. I realize now that this was only a matter of making up my mind. I simply needed to decide that I would pray five times a day and Allah would have helped me. Unfortunately I didn’t take this decision for a very long time.

I went on with this flaw in my practice for sometime, till one day suddenly, in a very round-about way, I realized the error in my ways.

And I had already started wearing a scarf over my everyday clothes, I was an avid reader and read a lot about Islam and generally knew quite a bit about it.

My friends most of whom were Muslim normally came to me when they had questions on Islam which I could normally answer. They considered me to be a pious and knowledgeable Muslimah.

One day I heard a friend saying that I must surely be praying five times a day. This came as a bit of a shock to me! I realized then that I had knowledge and was therefore aware of what was required of me a Muslim.

Also, strangely I had the image of an individual who prays five times a day – I was perceived as a practicing Muslimah. It was then that I made up my mind, no more excuses; no more lying to myself.

Today, I realize the discipline that prayer brings to my life. It is not difficult to maintain the schedule; rather it comes naturally to a believer. Everything else you feel are evil thoughts that an individual can overcome by simply being determined.

I have had many beautiful moments since then. Moments that became memorable because I prayed and lost myself in the worship of my Creator. Offering Fajr in the midst of an evergreen forest, Zuhr in a car park with my husband as the Imam and at work in the table-tennis room.

Islam is so wonderfully simple and unpretentious. A Muslim’s simple prayer keeps her/him strong and away from a whole list of social evils.

Prophet Muhammad was talking to his companions and said:

“If there was a river at the door of anyone of you and he took a bath in it five times a day would you notice any dirt on him?”

“Not a trace of dirt would be left.”

That is the example of the five prayers with which Allah blots out (annuls) evil deeds. (Al Bukhari and Muslim)

A Muslim will avoid sinning because he knows that he will have to face  his Creator very soon.

These thoughts keep popping up in mind:

“No partying late into the night – I can’t miss the Fajr prayer.”

” I got to be honest and fair at work, Zuhr prayer is just a few hours away.”

“Lunch will have to be Halal or what will I answer to Allah at Asr prayer.”

“Have I been good? Review my day’s work at Maghrib prayer.”

“Sorry mate, can’t drink at the pub, I will be praying Isha before sleeping.”

Through the prayers they offer, Muslims develop a constant link with their Creator. A relationship that eases a Muslim’s life, strengthens their faith; helps them maintain high levels of piety and righteousness and reject temptation.

A relationship that is alive, ready to light up and bloom.