The connection with Allah in prayer takes time to develop.
aaa

It’s a profound moment. When you stand, face Makkah, and detach from existence by saying “Allah is greater”- greater than everything. The soul, mind, and body engage in a moment of transcendence known as salah, literally meaning a communication and connection.

“In the name of Allah, the Entirely Merciful, the Especially Merciful.

Sovereign of the Day of Recompense.

It is You we worship and You we ask for help.”

The Creator responds by saying:

“My Slave has praised Me, my slave continues to praise me, my slave declares me Majestic. This is between Me and my slave, and for My slave is whatever he asks for.” (Muslim)

Now that a connection has been established, the worshipper puts forth the most important request, the master of all requests:

“Guide us to the straight path”

Guidance to the straight path means being led to the right decision and the right action in every moment of life. Not being incorrect, unfair, unjust, or susceptible to harm. In order for that to happen, knowledge and the courage to act on that knowledge is needed.

Salah (prayer) is then, the powerful line of communication available at any time to the human being for a meeting, seeking help, and remembering Allah. When Moses spoke to Allah at the sacred valley of Tuwa, one would imagine that meeting to serve as a great recollection of Allah. However, Allah did not tell Moses to remember Him through that amazing meeting but told him to:

And I have chosen you, so listen to what is revealed [to you]. Indeed, I am Allah. There is no deity except Me, so worship Me and establish prayer (salah) for My remembrance. (Quran 20:13-14) 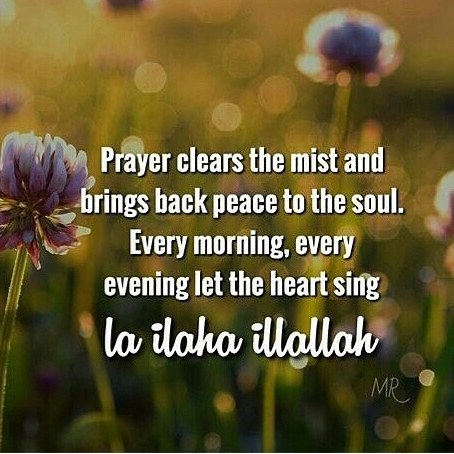 Sadness and depression overwhelm us in our lives when we often leave this line of communication. The Prophet Muhammad would turn to salah when he would face difficulty. Hudhayfah ibn Yamman said that:

“When something would be difficult for the Messenger of Allah, he would perform salah.” (Fath-al Bari- Hasan)

The Prophets Solomon and Job during their tests were described as “awwab”, those who returned to Allah often. Regarding Solomon:

And We certainly tried Solomon and placed on his throne a body; then he returned. (Quran 38:34)

And to David We gave Solomon. An excellent servant, indeed he was one repeatedly turning back [to Allah]. (Quran 38:30)

And remember Our servant Job, when he called to his Lord, “Indeed, Satan has touched me with hardship and torment. (Quran 38:41)

Indeed, We found him patient, an excellent servant. Indeed, he was one repeatedly turning back [to Allah ]. (Quran 38:44)

Each of them kept the line of communication open and engaged during their challenges. As a result, they were granted better conditions afterward. Solomon was given a kingdom like no other with the wind and jinn under his servitude.

So We subjected to him the wind blowing by his command, gently, wherever he directed, And [also] the devils [of jinn] – every builder and diver and others bound together in shackles. [We said], “This is Our gift, so grant or withhold without account. (Quran 38: 36-39)

Job was given his health and family back with greater happiness.

And We granted him his family and a like [number] with them as mercy from Us and a reminder for those of understanding. (Quran 38:43)

The help and support from Allah are clearly conditional. It has to be earned. Expecting a guarantee of His help without fulfilling His set conditions would be a pipe-dream. Note the very first thing Allah lists as a condition after promising His support is salah:

And Allah said, “I am with you. If you establish prayer and give zakah and believe in My messengers and support them and loan Allah a goodly loan, I will surely remove from you, your misdeeds and admit you to gardens beneath which rivers flow. But whoever of you disbelieves after that has certainly strayed from the soundness of the way. (Quran 5:12)

Prayer is the lifeline of faith. Without it, there is no line of communication to Allah and in essence, no faith. The Prophet Muhammad said:

“The covenant between us and them is the salah. If one abandons it then they have committed disbelief.” (Ibn Hibban- Sahih)

Like any communication, for it to be effective one has to focus and pay attention to the conversation at hand. A rushed communication would be a sign of disregard because something else seems to be more pressing and deserving of time.

A rushed communication with the King of Kings in salah is considered an improper communication and thus not regarded. The Prophet told a man to continuously repeat his salah simply because he would perform it quickly:

The Messenger of Allah entered the mosque and a person followed him. The man prayed and then went to the Prophet and greeted him; he returned the greeting and said:

The man went back and prayed in the same way as before, and then returned and greeted the Prophet who said:

“Go back and pray, for you have not prayed”, three times.

“By Him Who sent you with the Truth, I cannot do so any better than this, so please teach me.”

The connection with Allah in prayer takes time to develop. Every salah, however, can bring one closer to Allah and can create a stronger experience if the worshipper focuses on it daily. The experience in salah gets to a point where a person looks forward to the next one. The Prophet Muhammad in anticipation for the next prayer would describe his longing for it to Bilal when the time for adhan would come:

“Oh, Bilal! Perform the iqamah of the salah. Soothe us with it!” (Abu Dawud- Sahih)

The Need for Salah

If one uses the available line of communication or not, it doesn’t affect Allah. Therefore, the answer to the question, ‘does Allah need our prayers?’ is No. Allah has made it an obligation because it is beneficial for mankind and not that He is in need of our salah or our recognition. Humans need guidance from the All-Knowing to determine what is the right course of action in every moment of life.

A doctor obligating a patient to receive treatment does so for the benefit of the patient and not because the doctor has a need to prescribe treatments.

We are wired for a transcendent belief. We feel it. Even atheists acknowledge a higher power. Salah provides the link and line of communication to that higher power. This is why the dial up to connect is “Allah is greater”.