True and complete peace can only be reached when the individuals themselves achieve internal peace. This results from Islam or the true submission to God alone.
aaa

The word “Islam” is the verbal noun of the Arabic verb ‘aslama’. This verb is defined as: “He resigned or submitted himself.” When used with respect to God, it means: “He became submissive to God.”

Thus, Islam is about an individual recognizing who his Lord is and recognizing that his attitude toward his Lord and Creator should be one of submission and worship.

This understanding of what the word Islam means is vital for understanding the relationship between Islam and peace. Islam, the submission to God, is what leads to true peace.

True peace, both internally and externally, can only be the result of the correct implementation of Islam. Of course, what is meant here is not simply peace as in “an absence of a state of war.” Peace means much more than that. One can be free of war yet still suffer from anxiety or despair and lack peace. Here, it is referring to a complete sense of peace.

Islam brings about a complete tranquility and peace of mind that is the result of realizing that one believing and acting in accord with the guidance of one’s Creator. This internal peace can then spread to the family, the community, the society and the world as a whole. It is a special form of tranquility that can only be produced by the proper belief in God. Hence, God says:

{Indeed, there has come to you from God a Light and a clear Book wherewith God guides all those who seek His Good Pleasure to ways of peace, and He brings them out of darkness by His Will unto light and guides them to a Straight Way} (Quran 5:15-16)

In fact, God is calling humans to the abode of eternal peace:

{God calls to the home of peace (Paradise) and guides whom He wills to a Straight Path} (Quran 10:25)

For those who follow this path, their ultimate reward will be the abode of peace:

In sum, it is not correct to say, “Islam means peace,” but certainly true peace comes only via Islam.

How Islam Brings About Peace

True and complete peace can only be reached when the individuals themselves achieve internal peace. This results from Islam or the true submission to God alone. This is the only way of life consistent with the nature of human beings. In fact, this is what can be called the “true life.” Thus, God says:

{O, you who believe!  Answer God (by obeying Him) and (His) Messenger when he calls you to that which will give you life…} (Quran 8:24)

Knowing God is what can bring about true contentment in the soul. If the individual does not know his Creator, his soul will always be yearning for something that is missing in his life. He will always be agitated and confused. If and when he seeks things other than God, even things which he believes is his “god”, he will eventually end up in despair when he realizes that all of the things that he seeks after are not the one Being that his heart is yearning for. 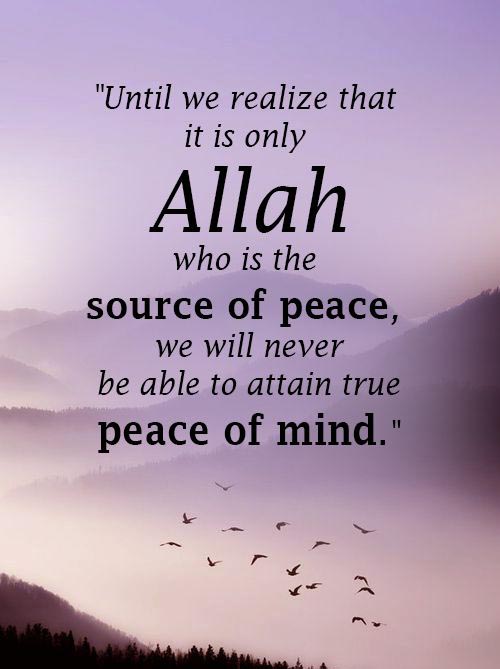 “You must know that a human’s need for God that he worship Him and not associate any partner with Him is a need concerning which there is no comparison that one can make an analogy to. In some matters, it resembles the need of the body for food and drink. However, there are many differences between the two.

The reality of a human being is in his heart and soul. These cannot be prosperous except through (their relation) with God, concerning whom there is no other god. There is, for example, no tranquility in this world except in His remembrance. Verily, man is proceeding toward his Lord and he shall meet Him.  He must definitely meet Him. There is no true goodness for him except in meeting Him.

If the human experiences any pleasure or happiness other than in God, that joy and happiness will not endure. It will move from one nature to another or from one person to another. The person will enjoy it at one time or only some of the time. In fact, sometimes the thing he enjoys and gets pleasure from does not bring him pleasure or enjoyment. Sometimes it even hurts him when it comes to him. And he is even more harmed by that. But his God is definitely always with him under every circumstance and at all times.  Wherever he is, He is with him, by His knowledge and aid.

If someone worships anything other than God even if he loves it and attains some love in this world and some form of pleasure from that, that (false worship) will destroy the person in a way greater than the harmful displeasure that comes to a person who ate poison.

All of the wealth and the goods of this world will not be able to bring the human such true internal contentment. Abu Hurayra narrated that the Prophet, peace be upon him, said:

Once an individual is at peace with himself and free of any internal agitations, he can then enter into truly peaceful relations with others. He will have no reason to feel resentment towards the rest of the world-those whom he may blame for his lack of internal peace. In fact, since his goal is that of the Hereafter, he has no reason even to feel envy or rage towards others concerning what they have received in this world, while envy and rage strike at the very root of peaceful relations towards others.