A few years back I was dragged to the movies by my family.

They were all excited to see ‘another’ new Marvel comic brought to life on the silver screen- The Avengers.

Despite Tony Stark’s snarky humor, I was pretty bored with the whole affair. That was until it was time for the Hulk to finally transform into his big, green monster state and start kicking bad guy rear end and leave the taking of names to the authorities.

In the scene, all the other Avengers were worried that Bruce Banner (The Hulk as a man) wouldn’t be able to get mad enough in time to transform. And they were asking him what normally triggers his rage in order to transform. Bruce Banner stated, “I am always angry” then boom, the mild-mannered man transforms into the green, fearsome giant and sets to smashing up stuff.

I thought this was a magnificent example of self control.

Despite his constant anger at his situation, Bruce Banner was in complete control of the monster inside of him. He knew that if he wasn’t in control of himself (his nafs) those he loved would bear the brunt of the blind rage he experiences as the Hulk.

This is a fundamental lesson for human beings that Islam touches on time and time again.

For example we see this very situation commented on by the Prophet Muhammad (peace be upon him):

We as Muslims, and indeed as human beings, are not asked to never feel emotions. But we are asked to be in control of ourselves despite what our emotions tell us to do. We are taught that our emotions can lead to bad actions that can not only hurt us, but also hurt those around us.

Islam guides us to understand that the way we deal with others is of the utmost importance, because everything we do should be for the sake of Allah. Our lives, including our treatment of others, should be an act of worship.

“Islam taught me that I should be kind, patient and merciful towards others, even when they are harsh or unjust towards me.” She is an example of showing kindness despite the inner hulk we all wrestle with.

Allah states in the Quran:

Salman Al-Oadah writes, in an article entitled “Keeping Calm is a Skill”:

“This [verse] means that true faith is a moral practice carried out on a high level that entails concern for how we deal with others and acknowledge their rights.”

In this verse and explanation we can understand that belief will not be apparent until we incorporate it into how we act toward others. We, like the Bedouins (nomadic Arabs), can say we believe all we want, but it will only be on the tongue and not in the hearts until we put in into action in the good treatment of others. 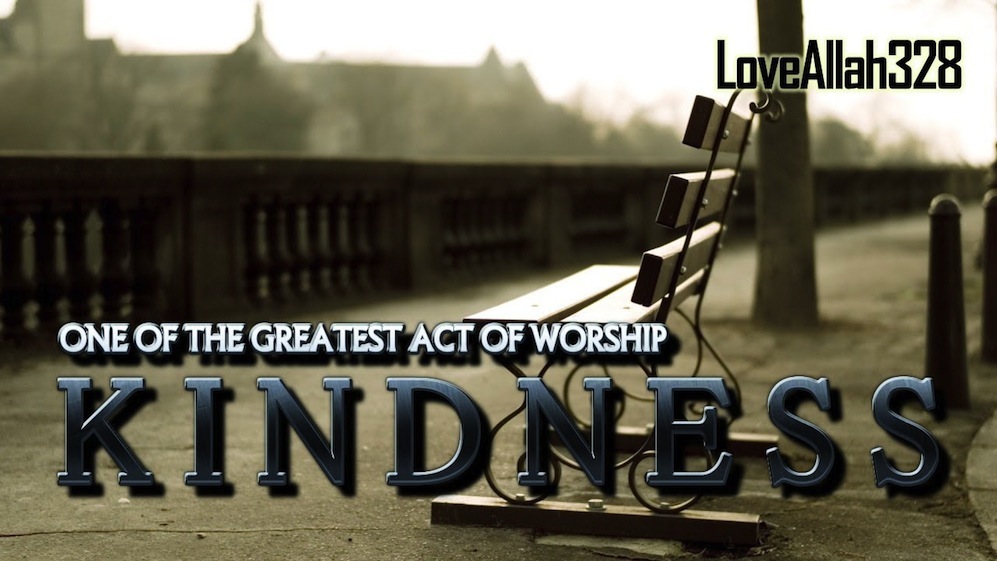 Whoever wishes to be saved from Hell and admitted into Paradise as desired, they should believe in Allah and the Last Day and treat other people the way they themselves would like to be treated. (Muslim)

In this hadith, the Prophet makes no distinction between Muslim and non-Muslim, Arab or non-Arab, we must treat everyone well no matter how they treat us. But there are those who have the most rights over us and to whom we own the best of treatment.

Being a parent is one of the most difficult things one can do.

No one wants to carry and suffer physical and emotional pain for anyone else. But parents do it willingly out of love for their children.

And as we get older, we forget all that our parents have done for us. As we age, our memories of our impertinence, refusal to go to bed, and all the expenses we had as children fade from our memories.

But our parents’ bodies show the signs of our upbringing. They are hunched and weary from the work. But still we do not remember. And we tend to see them and treat them as a nuisance, even getting angry at them for having need of us.

We owe our parents so much that Allah, in the Quran, tells us how we should treat them:

And lower unto them the wing of submission and humility through mercy, and say: ‘My Lord! Bestow on them Your Mercy as they did bring me up when I was small.’ (17:24)

Many times we see in the Quran Allah telling us, after Tawheed, good treatment of parents is of the utmost importance.

Thy Lord has decreed, that you worship none save Him, and (that you show) kindness to parents. If one of them or both of them attain old age with thee, say not ‘Fie’ unto them nor repulse them, but speak unto them a gracious word. (17: 23)

After Allah, to our parents we owe our life. To them we are indebted. And to them we must offer the best treatment whether that means taking care of them in old age with patience or visiting them and offering a kind word and gifts to brighten their day.

In front of them more than anyone else, we must keep our inner hulk at bay.

After offering good treatment to our parents, we must treat our families well. Allah states in the Quran after Tawheed and the rights of the parents, comes our duty to our family.

The continued juxtaposition of maintaining belief in the oneness of Allah and the treatment of parents and family makes the matter a serious one.

The Muslim should take nothing more seriously than Tawheed. And by mentioning the treatment of family in tandem with Tawheed it elevates the level of seriousness of the matter.

When it is used to indicate a person’s relatives, it includes all his relatives whether close or distant, heirs or not […] The Arabic root from which the word rahim is derived indicates mercy and compassion […] The Prophet (peace be upon him) said:

Allah says: I am Ar-Rahman (the Most Merciful) and I have created kinship (that is rahim) and given it a name which is derived from My name. He who fosters it I will bless, and he who severs it I will sever. (At-Tidmidhi)

To me, the fact that family shares the name rahim with one of Allah’s most glorified attributes reminds me, during the aggravation of family gatherings, to have mercy, to smile, to foster familial love, and not to turn green in the face of family discord.

The Needy and the Neighbors

Worship God alone and do not associate with Him any partners. Be kind to your parents and near of kin, to orphans, the needy, the neighbor who is related to you and the neighbor who is a stranger, the friend by your side, the wayfarer, and those whom your right hands possess. God does not love those who are arrogant and boastful. (4: 36)

Allah is redirecting our attention to them. Allah is reminding us that He does not love those who think they are better, those who look down on these people and treat them harshly.

You may notice that the most emphasis on being kind is given to those who are closest to us. The closer we are to people the easier it is to treat them well.

Try living in tight quarters with the most beloved and easy going person. And then try not getting into a fight. It is hard.

But if we are kind to those who are closest to us, if we control our inner monster, no matter how they treat us, we are building the foundations of a strong community.

This kind treatment is infectious and will radiate outward into the world.

Imagine a kindness revolution that starts at home, in your family, in your neighborhood… despite the green, mean, anger machine inside all of us.