It is important to know firstly that patience does require building. Some people have more of a disposition to be patient, but this does not mean that all of us cannot have this characteristic – because God does not place a burden on us greater than we can bear.

It may feel easy sometimes to give into our whims; to give into rage, to give into resentment, and to give into despair. But because patience is a process, it is something that we learn to be over time. As long as we are conscious of this, then God will help us to be of the patient. And we need to be confident of that.

The first aspect of building patience is knowing the benefits of patience.

As human beings, we often ask “why”. Why should we be patient? And when we know the answer, it is easier for us to commit to the task. It is something that needs constant reminding that this is not for nothing. There is so much good in being patient. God tells us in the Quran:

…Indeed, the patient will be given their reward without account. (39: 10)

One of the explanations of this verse is that those who were constantly patient enter Paradise without reckoning. This one characteristic can do that, which shows us how powerful it is and how it manifests in the life of a believer. And a part of the building process is knowing that there will be afflictions. God tells us:

Be sure we shall test you with something of fear and hunger, some loss in goods or lives or the fruits (of your toil), but give glad tidings to those who patiently persevere. (2: 155)

Another benefit of patience is that God endows us with more faith. Prophet Muhammad (peace be upon him) tells us:

Whoever curbs his anger, while being able to act, Allah will fill his heart with certainty of faith. (Al-Bukhari)

This is why many scholars, such as Ibn Abi Ad-Dunya, have said:

“Patience is half of faith.”

Ali ibn Abi Talib expands on this when he said:

“And patience has the same relation to faith as does the head to the body; when patience goes then iman (faith) goes, for when the head goes, the body goes.” (qtd. in Al-Suyuti’s: The History of the Khalifahs) 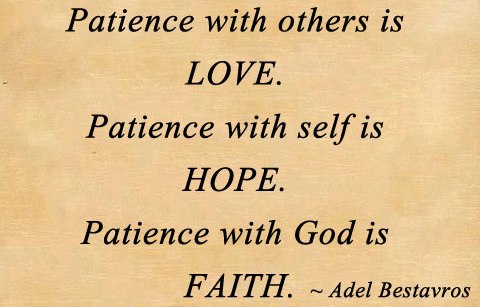 “There is a blessing in calamity that the wise man should not ignore, for it erases sins, gives one the opportunity to attain the reward for patience, dispels negligence, reminds one of blessings at the time of health, calls one to repent and encourages one to give charity.”

Victory can only come with patience, so if we are in a state trying to keep ourselves patient, we should find rest in the fact that victory is promised with it.

Umar also embodied this state of knowing benefits when he said:

“When I am struck with calamity, I thank Allah for four things:

And while some of us may feel down when we give into feelings of impatience, we must remember that God tells us:

The effort is the most important part of the journey.

Reminding ourselves of the benefits requires knowing, and knowing means certainty. So yaqeen (certainty) is the second component, which is the absolute certainty that God’s promise is true. God says to us twice:

So there is no waste in being patient. There will be good that comes after it, because God’s promise is true. It is having certainty that even when we deal with people’s ignorance and respond with patience like the verse tells us:

Repel [evil] by that [deed] which is better…

The result is surely this:

…and thereupon the one whom between you and him is enmity [will become] as though he was a devoted friend. (41: 34)

Certainty also comes when we constantly remind ourselves of stories of those with patience. Umm Salamah for example, lost her husband in battle, and she loved him dearly. Prophet Muhammad told her:

And she had certainty in his words, even though she wondered:

“Who could be better than Abu Salamah?”

So God gave her the Prophet (peace be upon him).

Another example that needs deep reflection is that of the Prophet Job (peace be upon him). It has been argued that the sole reason he was sent to us is to show us the virtue of patience.

We were not told of stories of how he called people to Islam, but simply of how he dealt with the greatest hardships. He lost everything after having so much, yet he did not complain nor did he get angry with God. And at the end of it was an amazing reward, and God tells us:

Finally, and most importantly, it is to be connected to God. Any good that we do is only through Him. A person who is truly connected to God is more detached from this world anyway. And once a person is detached from this world, and his hope is in God, the calamities, hardships and annoyances are not that great. We see them for what they are; inconsequential in the long run. Prophet Muhammad (peace be upon him) said:

My similitude and that of the life of this world is that of a traveler who took a rest at mid-day under a shade of a tree and then left it. (Ahmad)

When he was beaten at Ta’if, his concern was not that people humiliated him or how he would deal with the coming days. His concern was:

O Allah are You angry with me?

That is how he was able to react in the way that he did. He did not throw stones back at them. He did not curse them. On the contrary, he was given the option by an angel to destroy them, and it was his foresight and knowledge of the ultimate goal that allowed him to be forbearing and say:

No. Rather, I hope that Allah will bring forth from their loins those who will worship Allah alone and not associate anything with Him. (Al-Bukhari and Muslim)

In other words, Prophet Muhammad kept his eye on the prize. It was not about him but about the greater message that he was trying to spread.

When our focus ceases to be solely on ourselves and our pride and ego, patience is easier to manifest. And this is how we can be true believers, like the Prophet (peace be upon him) described: