A short time later, she had a very sad experience which was the death of her six-year-old child `Abdullah. Her mourning over her son weakened her and she began to suffer from fever.

Her husband, `Uthman stayed and took care of her. At that time, the Muslims were marching to the Battle of Badr. `Uthman did not manage to catch up with them and so he did not participate in the battle according to the instructions of the Prophet.

Allah Willed that Ruqayyah passed away at the same time that Zayd Ibn Harithah reached Al-Madinah with the glad tidings of the Muslims’ victory in the Battle of Badr. Once Zayd reached Al- Madinah, he found `Uthman Ibn ‘Affan, may Allah be pleased with him, burying his wife, Ruqayyah.

After the death of Ruqayyah, the Prophet married his daughter Umm Kulthoom to `Uthman Ibn ‘Affan.

This is the reason why `Uthman Ibn ‘Affan was called ‘the holder of the two lights’ because he married two of the Prophet’s daughters. It was a great honor that none of the other companions had.

The marriage took place in Rabi’ Al-Awwal of the third Hijri year. She led a happy life with `Uthman Ibn ‘Affan. And she lived until she saw Islam winning new grounds one day after another and she also saw how well her husband served Islam.

She remained with `Uthman Ibn ‘Affan until she died in Sha’ban in 9 A.H. without having any children.

Umm Kulthoom was buried next to her sister Ruqayyah, and the Prophet (peace be upon him) was seen near her tomb with tearful eyes and a sad heart.

She is the youngest daughter of the Prophet. Being born in the fifth year before prophethood, Fatimah had a happy childhood with a loving parent and caring sisters.

She witnessed the emergence of Islam in her father’s house, his call for monotheism in Makkah, and his suffering so as to spread the Islamic call. Ans she supported her father and tried to keep any kind of harm away from him.

After her emigration to Al- Madinah, Ali Ibn Abi Talib, the cousin of the Prophet, married her in the 2nd Hijri year, when she was about eighteen years old. The furniture of her house was very simple as it only consisted of a striped sheet, a leather cushion stuffed with palm fibers, two cups for drinking, and two pottery bowls. Her husband ‘Ali was poor and he could not afford to hire a servant to help her.

Fatimah used to do all the household chores such as grinding grain, carrying water home, and taking care of her house. 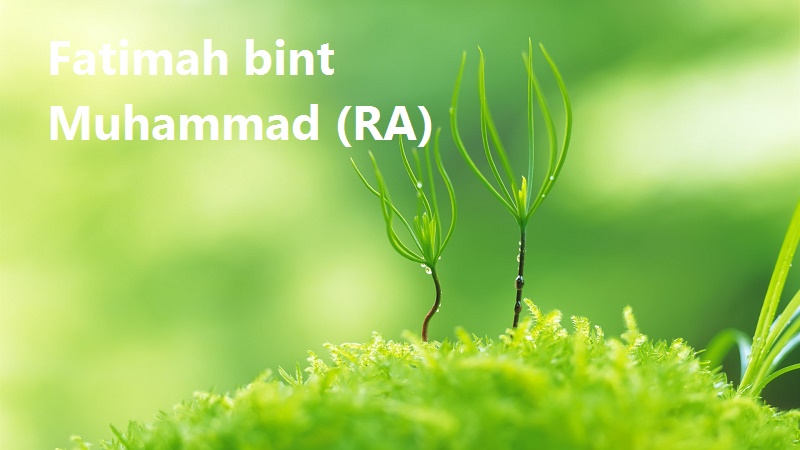 The marriage life of Fatimah, the daughter of the Prophet was a serious and harsh one. In the 3rd Hijri year, she gave birth to her first son, Al-Hasan Ibn `Ali. The Prophet was very happy with his birth and he gave out the weight of his hair in silver in charity to the poor.

In Sha’ban of the 4th Hijri year, she gave birth to Al-Hussein. The Prophet was also very happy with his birth and he enveloped both his grandsons with all the love and tenderness that he had in his great heart.

Allah bestowed His favors on Fatimah as the progeny of the Prophet was from the offspring of her sons. Thus, the best family – throughout history – continued through them.

Fatimah resembled her father, the Prophet Muhammad, more than anyone else, as far as the way he walked and his speech are concerned. When she came to visit the Prophet, he would stand up to welcome her, take her by the hand, kiss her, and make her sit where he was sitting. The Prophet loved her so much that he said:

Fatimah is a part of me, and whoever makes her angry, makes me angry. (Al-Bukhari)

The Prophet described her as the best of all women. He said:

Fatimah lived until the Prophet died and she herself died six months after his death in Ramadan 11 A.H. when she was twenty eight years old. She was buried in Al-Baqee’.

Ibrahim was the last son of the Prophet (peace be upon him) and his mother was Maria Al-Qibtiyyah. Al-Muqawqas, the ruler of Egypt, gave Maria as a gift to the Prophet in the 6th Hijri year, and she embraced Islam and Prophet married her. When Ibrahim was born, the Prophet was very happy.

On the seventh day after Ibrahim’s birth, the Prophet had the baby’s hair shaved and he gave its weight in silver as charity to the needy.

Ibrahim did not live long as he died when he was only eighteen months old. He died while the Prophet was holding him and he (peace be upon him) was very sad. He wept over his son and said:

The eyes are shedding tears and the heart is grieved, and we will not say except what pleases our Lord. O Ibrahim! Indeed we are grieved by your departure. (Al-Bukhari and Muslim)