The Angel Gabriel and Prophet Muhammad continued their miraculous ascension through the heavens.

This journey was far beyond the widest imagining of any human being.

It began in the deserts of Arabia and spanned the reaches of the known universe and beyond.

At the gate of the seventh heaven, they exchanged the same questions and answers as in the previous heavens, and the angels declared their pleasure at meeting Prophet Muhammad.

In the Seventh Heaven

Permission to enter was given and the Prophet of God, accompanied by Gabriel, the angel trusted with the revelations of God, moved into the final heaven.

In Islam, the seventh heaven is where Prophet Muhammad met Prophet Abraham; and indeed, he (Muhammad) must have been extremely happy and in a state of bliss, having been honored with this journey of wonders.

Both Prophets exchanged greetings by saying Assalamu alaikum (may peace be upon you) and, as every other Prophet had done, Prophet Abraham expressed his belief and faith in Prophet Muhammad’s mission.

In Jewish traditions, Abraham is called the father of the Jews. However, Islam rejects this idea, for the Quran clearly states that he was neither a Jew nor a Christian, but a believer in pure monotheism (belief in one God).

Why do you dispute about Abraham, while the Torah and the Gospel were not revealed until after him? Have you then no sense? Abraham was neither a Jew nor a Christian, but he was a true Muslim (submitting to God) Hanif (in truth and sincerity). (3: 65-67) 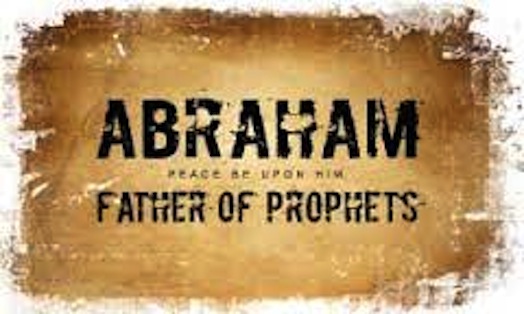 Muslims are required to believe in all of the Prophets of God; Abraham, however, holds a special place as one of the important messengers of God and has the unique honor of being called, in both Islamic and Christian (Isaiah 41: 8) traditions, the beloved servant of God.

Together, Abraham and his son Ishmael built the Ka’bah (the black cubical building in the middle of the Holy Masjid in Makkah).

And remember when Abraham and Ishmael were raising the foundations of the House, saying, Our Lord! Accept this from us. Verily! You are the All-Hearer, the All-Knower. (2: 127)

Muslims turn their faces towards the Ka’bah many times every day whilst performing their prayers, and in every prayer, they ask God to bless Abraham and his family.

The World of Angels

While in the seventh heaven, Prophet Muhammad was shown the building known as the much-frequented house, or al Bayt al-Mamoor in Arabic. It is fitting that Prophet Abraham was here with this house, as it is the heavenly equivalent of the Ka’bah in Makkah.

Each year at the time of pilgrimage (Hajj), more than 2 million Muslims from all over the world flock to Makkah to follow in the footsteps of Prophet Abraham and perform certain rites including circling the Ka’bah.

Every day 70,000 angels visit this much-frequented house in the seventh heaven to worship God. Prophet Muhammad informed us that, once the angels have visited al Bayt al-Mamoor, they never return. God swears by this house in the Quran. (52: 4)

Seventy thousand angels every day! What are the implications of this? Think about it and wonder for how many thousands or even millions of years has this been happening? How many of these beings, created by God from light, are there?

This was another wonder that Prophet Muhammad was privileged to see and made able to describe to us. In his traditions, he also informs us that the heavens above us are moaning, every space as big as the width of four fingers is occupied by an angel worshiping God.

Prophet Muhammad then moved through the seventh heaven to the uppermost boundary, to Sidrat al-Muntaha, a Lote Tree.

He described its fruits like jugs and its leaves as big as elephant ears. Four rivers originated from the Lote Tree’s roots. When he asked about them, Prophet Muhammad was told that two of the rivers originated in Paradise.

Nothing has reached us about the names or significance of these two rivers from the narrative of the ascension. However, he was told that the other two rivers were replicas of the Nile and the Euphrates, two rivers that are especially blessed in this world of mankind.

Beyond this point, we leave the heavens and move into the realm of the hereafter, the realm that contains Paradise and the Throne of God. As Prophet Muhammad continues his miraculous journey, he moves into this realm and stands in the presence of God Almighty.