Despite Prophet Muhammad’s strong love for Aisha, the other wives were not sidelined.
aaa

Marriage has always been an important facet in Islam, an avenue where two genders under permissibility of a relationship meet and raise the next generations of Muslims.

The Quran describes the relationship between husbands and wives as garments that cover each other.

This was very much seen through the interaction between Prophet Muhammad (peace be upon him) and his first wife, Lady Khadijah bint Khuwaylid.

While he could have chosen any young virgin wife, Prophet Muhammad, a young man of twenty five, married Khadijah, who had been twice widowed and was also fifteen years older than him. Even in today’s modern age, this type of relationship would bring upon a certain stigma.

Why marry a woman who is “old” and has grown up children of her own?

Well, it was decreed for this marriage to take place, to not be judgmental about relationships that bind two souls together, as long as it was done within the realm of legal marriage.

When Prophet Muhammad received the first revelation, he shook in fright as he descended from Cave Hira’. His wife, now a lady in her 50s, caught him and wrapped him in a blanket, assuring him that whatever he saw was not a curse, and that he was the man known as the Trustworthy, who was always kind to his family and friends, and never spoke an untrue word.

Khadijah followed the directions from the Quran to the tee. She gave away her riches in the name of charity, helped the poor and prayed openly behind her beloved husband. While the angered pagan Arabs taunted him with death threats and mocked him senseless, she stood by Prophet Muhammad in total faith and loyalty and even withstood the heavy embargo that was imposed upon Muslims.

She could have renounced her faith, but as she watched her husband lead by example, she became his most staunch follower, and it was through her husband’s leadership that Khadijah also earned the title of “leader” in her own right, and is recognized by God All-Mighty Himself, as one of the four perfect women in Islam.

Things changed after Khadijah passed away. The heavy embargo that she had endured was too much for her elderly state. It was the year of sadness, when Prophet Muhammad put her down for her final rest. She had been his only wife for 25 years, and he was saying goodbye to his confidante, his best friend, his partner, and the mother to his six children.

But there was revelation thereafter, for Prophet Muhammad to wed one wife after another (without divorce). This directive was for him alone while other believing men were encouraged to marry one wife up to four maximum.

There are many lessons that we can learn from Prophet Muhammad’s marriages. All of them, firstly, were directives from God. Prophet Muhammad never married out of his own desire but was guided by God to marry women who were later given the title “Mothers of Believers”, and honored as Mothers throughout Islamic History.

All Wives Were Honored as Per the Quran

Prophet Muhammad remained to be the best of all husbands. He always reminded his male companions to be kind to their wives as he was kind to his wives, and that he was of the best character when it came to dealing with marital relations.

He repaired his own clothing, did his household chores, ran errands, all while taking care of his family and continuing his dawah work amongst the Muslims, new Muslims and those who were interested in Islam.

He treated all his wives in fairness. It was known that marrying many women was not a luxury for Prophet Muhammad. He still lived in hardship and worked hard to provide for all of them, with whatever little sustenance he had. His wives too were of full understanding of what the marriage entailed as they too abandoned the worldly life for the Hereafter. 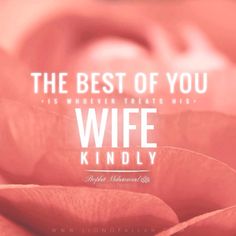 While all the Mothers of Believers were given adequate lodging and sustenance, they were treated with equity.

Aisha daughter of Abu Bakr for example, was the youngest wife of the Prophet and was the only wife who had been unmarried before. Because of this, Prophet Muhammad provided more time and attention to her as the other women he had married were more mature in dealing with marital affairs.

As a young wife, Aisha was playful, and the Prophet would race her when they were in the outdoors. Once, a group of Abysinians in the middle of a sporting event piqued her interest, and Aisha watched with curiosity by her husband’s side, until she grew bored and withdrew on her own accord.

Aisha grew up to be very independent and it was through the years of her inquisitiveness, always asking the Prophet of certain narrations or sayings, that gave rise to her intellect and recognition as one of the most important scholars in Islamic History.

Prophet Muhammad encouraged her questions to ensure every detail that could cause unearthed ambiguity, and it is mostly through a young girl’s eyes of innocence, could this be done.

Despite Prophet Muhammad’s strong love for Aisha, the other wives were not sidelined.

In fact, he spent his nights on rotation to ensure all the women in his ambit were given fair attention.

For those whom he had married with younger children, he was also a father to them and took care of them like they were his own.

At the same time, all his wives were his consultants and confidants. Although all directives  came from God, Prophet Muhammad still made a big deal to consult his wives before anyone else, to demonstrate how important these companions were.

Leading by Example and Turning Hearts Towards God

Prophet Muhammad led such a basic life, that he only slept on a thin bedding on the floor, used water sparingly, and on many days had very little to eat.

Imagine living in these conditions and being directed by God to marry many women (with most of them raising their own children from previous marriages), treat them equally and provide for them and their children.

At one point in time, the wives of Prophet Muhammad, in their humanness, did ask for a little more than they had. They were not indecent requests and Prophet Muhammad was not angered at them. Instead, he chose solitude to express his sadness, and in turn, his wives also felt grave sadness upon them.

When Abu Bakr and Umar (both of whom had daughters married to the Prophet) heard of this incident, they were angry at their daughters for causing pain to the Prophet. However, the Prophet cautioned to not be mad at his wives as he felt the grief of being unable to meet their requests.

In turn, God advised the Prophet:

{O Prophet! say to your wives: If you desire this world’s life and its adornment, then come, I will give you a provision and allow you to depart a goodly departing. And if you desire Allah and His Messenger and the latter abode, then surely Allah has prepared for the doers of good among you a mighty reward.} (33: 28-9) 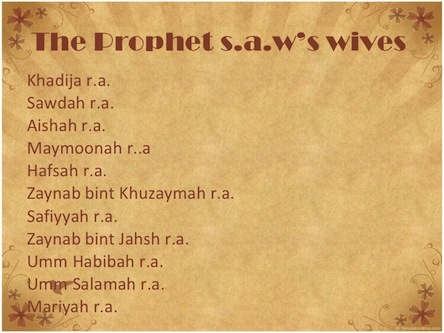 Disputes of Jealousy Were Resolved with Wisdom

Despite the special status of the wives of the Prophet, they were reminded of their humanness, as some ill feelings of jealousy and misunderstandings did arise. In a famous report, Prophet Muhammad received some gifts from someone, which included a beautiful necklace.

As the Prophet unraveled the gift, he announced that he would give the necklace to the person he loved most.

Some of his wives began whispering that he would choose the daughter of Abu Bakr (Aisha), as the recipient of the gift.

Prophet Muhammad then summoned Umamah, his granddaughter through Zaynab, to present the gift to. Umamah was a young girl and busy playing while all this was happening.

One of Prophet Muhammad’s later wives was Safiyya bint Huyayy who had accepted Islam after the army her father had led against the Muslims faltered in battle. Safiyya chose to wed Prophet Muhammad and become a Muslim rather than be free and return to her tribe. Safiyya, although, honored by the Prophet as a “Mother of the Believers”, sometimes faced hardship amongst the Arabs, including her co-wives. They sometimes would call her “the Jew”.

Prophet Muhammad instead of becoming angry at the others, he helped Safiyya stand up to those who were sarcastic towards her. He said:

“If they repeat it, give them this response:

When she would garner whispers while they were together, the Prophet would firmly say:

“She is my wife,” to ward off any ill intentioned speculation or gossip.

Prophet Muhammad led by example and served his family humbly. He will also be remembered as the best of husbands in Islamic History.