It was indeed the Prophet’s honesty and sincerity that most eminently helped him to bring forth the most refined and civilized society out of an extremely backward and barbarous people.
aaa

In the Quran, Allah Almighty repeatedly mentions truthfulness as one of the chief characteristics of His Prophets. For instance we may read this verse about Prophet Ibrahim (peace be upon him) among others:

And about Prophet Idris (peace be upon him):

It was invariably the absolute integrity and moral rectitude of the prophets that prompted the people to embrace their message without doubt. The case of Prophet Muhammad (peace be upon him) was not different. He had earned the title, Al-Amin, the Trustworthy, long before he received the first revelation.

To Prophet Muhammad Allah Almighty had entrusted the responsibility of conveying to humanity the completed Guidance of Allah, and leading them along the path of peace, harmony and love.

One of the hall marks of the Prophet was his single-minded dedication and commitment to the mission Allah wanted him to complete. He was so sincere and faithful to the Cause of Islam, that no power on earth could divert him from his path.

One incident that proved the Prophet’s absolute sincerity and loyalty to his mission, despite the terrible odds, was this: After the Prophet was able to gather followers from among the Quraish, some of their leaders approached his uncle Abu Talib, with the intention of using his influence to dissuade Muhammad (peace be upon him) from his mission. But the Prophet told his uncle:

“By Allah, if they put the sun in my right hand and the moon in my left hand on condition that I abandoned this course, I would not abandon it until Allah has made it victorious, or I perish therein.”

And this was no exaggeration; he was making clear to his uncle as well as to the Quraish leaders, as calmly as he could, how determined he was in the performance of his God-given task. And he meant exactly what he said. There indeed was no incongruity between his word and deed: 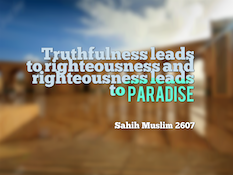 Every one could see that he practiced exactly what he preached. Even those who did not accept his religion had no doubts about that. Indeed the perfect integrity of his character was exemplified in every aspect of his bearing, expression, word and deed. This is borne out by several instances in his life:

After the Prophet received Allah’s commandment to openly invite people to Islam, the Prophet went out and ascended the Hill of Safa and addressed the people:

“If I tell you that an army of horsemen are coming up the other side of this mountain, will you believe me?” They said: “We have never heard you telling a lie.” (Bukhari)

Then he told them of his mission, though at the time the people were disinclined to give up their traditional religion and follow him. Allah Almighty commanded the Prophet to tell the people:

And Allah Almighty commanded the Prophet (and through him all of us) to declare:

{Say. Surely my prayer and my sacrifice and my life and my death are (all) for Allah, the Lord of the worlds; No associate has He; and this am I commanded, and I am the first of those who submit.} (Quran 6: 162-163)

And it is no wonder that the Prophet attached so much value to sincerity and honesty in every aspect of his personal dealings that he took the utmost care not to taint even his jokes with any tinge of untruth. He said:

“Woe to him who tells things, speaking falsely, to make people laugh thereby. Woe to him! Woe to him!” (Abu Dawud)

“A Muslim is one from whose tongue and hand the Muslims are safe, and a believer is one in whom people place their trust in regard to their life and wealth.”  (Tirmidhi, Nasa’i)

The Prophet taught his followers to avoid all situations that may push them to be untruthful; such as borrowing money which they may find difficult to repay. One of his own usual prayers was to seek refuge with Allah from being in debt.

A companion once said: “O Allah’s Messenger! very often you seek refuge with Allah from being in debt.”

And the Prophet answered:

“If a person is in debt, he tells lies when he speaks, and breaks the promises he makes.” (Al-Bukhari)

The Prophet told his followers that if they promised him six things, he would promise them Paradise:

“Speak the truth, keep your promises, fulfill your trusts, remain (sexually) chaste, don’t look at what is unlawful, and avoid what is forbidden.” (Ahmad)

And urged the people to always seek truthfulness even if they feared it might ruin them. He harshly castigated those who broke their trust or were disloyal:

“When God gathers together on the Day of Judgment all the people preceding and to come, a banner will be raised on behalf of every disloyal person. It will be announced: ‘This is because of the disloyalty of so and so!'” (Muslim)

Once, one of his companions was trying to entice a horse with a false gesture of promise. The Prophet told him not to do so. He said:

“Stop deceiving animals. Instead, be trustworthy with them.” (Al-Bukhari)

According to the Prophet:

It was indeed the Prophet’s honesty and sincerity that most eminently helped him to bring forth the most refined and civilized society out of an extremely backward and barbarous people.

In Makkah when the Prophet had started his mission of calling people to Islam, a group of the Quraishi elite came to him with offers that no ordinary mortal could resist: They said to the Prophet:

“If you want wealth, we will amass for you as much as you wish; if you aspire to win honour and power, we are prepared to swear allegiance to you as our overlord and king; if you have a fancy for beauty, you shall have the hand of the most beautiful maiden of your own choice.”

“I want neither wealth nor power. God has appointed me as a warner to humanity. I deliver His Message to you. Should you accept it, you shall have felicity in this life and eternal bliss in the life hereafter. Should you reject the Word of God, surely God will decide between you and me.”

The deep faith and determination with which the Prophet undertook his God-given mission to eventual success, prove the supreme truth of his Message. If he had harbored the slightest doubt in his heart about the truthfulness of his mission, he would have faltered and miserably failed as a Prophet.

We should not forget that the details of the faith as well as the practice of Islam, which became the philosophy and the way of life of millions, were actually brought by an unlettered man, who became nearer and dearer to their hearts than their own father, mother, husband, wife or children.

Of all the personal qualities of the greatest benefactor of mankind, if one may choose one quality as the most important, it is indeed his unfaltering truthfulness.  And Allah knows best.