As we go about our lives in this modern age, we are constantly bombarded with reports of violence and unrest in all parts of the world.

It often feels like our world is broken, and nothing short of a miracle will fix it.

So many people have serious grievances and seemingly unsolvable problems.

But this is nothing new.

The Prophet Muhammad (peace be upon him) was born into a society that had many of the major problems that we face today.

And he mended ties between neighbors, people and even his own enemies.

He taught us how to turn those issues of strife into peace and security for everyone.

A Peacekeeper Between Neighbors

In the society in which the Prophet (peace be upon him) was raised, treating one’s neighbor badly was considered acceptable and even expected behavior.

It wasn’t uncommon for neighbors to be constantly fighting and spitting insults at one another, among other more harsh treatment.

“We were a nation of ignorance and evil. We used to break our family ties and treat neighbors badly”. (Reported by Ahmad)

To this society who thought nothing of treating each other so badly, the Prophet Muhammad said:

The Prophet came to establish peace, justice, and social harmony.

And by rectifying the treatment of neighbors, he was using a grassroots approach to establishing a community based on neighborliness.

But he didn’t just preach this good treatment of neighbors to other. He practiced it.

One of many examples of this was when the Prophet learned of the sickness of his Jewish neighbor, he visited him and made sure he was taken care of.

A Peacekeeper Among Peoples

The Prophet Muhammad (peace be upon him) was born into a world filled with turmoil.

Not only did neighbors regularly disrespect and goad each other, tribes were constantly warring with each other over the smallest and even perceived infractions.

Corruption was the order of the day in politics.

The rich and wealthy lived lavishly on the backs of the weak and oppressed.

Peace and safety was not a luxury many enjoyed.

The Prophet’s time and place had a great effect on him. Before the revelation came to him, he spent a lot of time in seclusion, contemplating the chaotic state of his society. It weighed on him heavily.

During the Prophet’s life, even prior to revelation from Allah Almighty, he was known as a peace keeper.

He demonstrated his desire to keep the peace and his genius way of doing so while the tribes of Quraysh were rebuilding the Ka’bah:

“The tribes of Quraysh reached the point where the Black Stone was to be placed in its designated site. 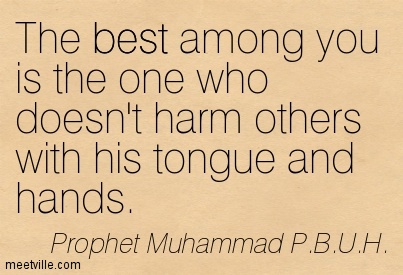 A dispute erupted between the various tribes of Quraysh.

[… The Prophet] asked them to bring a garment and place it on the ground. He placed the Black Stone on it.

He then requested that each of the leaders of Quraysh hold the garment from one side and all participate in lifting the Black Stone, moving it to its designated area. […].” (Tafsir ibn Kathir)

This is one of many examples in which he established peace among different peoples.

After having received revelation from Allah (SWT) and proclaiming the message, his role as peacekeeper intensified.

Many people did not like the message of Islam. It demanded justice and social equality.

Those who benefited from the unjust social structure of the time didn’t want to see their status change nor did they want their privilege taken away.

These tyrants saw Islam as a threat to their unjust advantage in life over the weak.

Those who opposed Islam sought to destroy the message by any means necessary.

The first Muslims in Mecca were tortured, murdered, starved, boycotted by these enemies of Islam.

But during this time in Mecca, the Prophet sought peace and told the Muslims not to retaliate.

Allah revealed to him that:

Not equal are the good deed and the bad deed. Repel evil by that which is better, and then the one who is hostile to you will become as a devoted friend.

When the situation in Medina got so bad that the Muslims were running the risk of extinction, Prophet Muhammad’s reputation as a peacekeeper secured for the Muslims a home in a new city called Yathrib, now known as Medina.

In Medina at that time, there were many different peoples, tribes, and faiths living in extreme civil unrest.

The city was lawless and most disputes were settled by the blade, which lead to even more disputes.

The inhabitants of Medina desperately needed peace and structure, so they ask the Prophet to come arbitrate and establish peace among them.

Upon his arrival in Medina, the Prophet drew up the constitution of Medina. A document that is, to this day, a shining example of how pluralism can exist and can even exist in peace.

The Zia Shah explains that:

“The Constitution established: the security of the community, religious freedoms, the role of Medina as a haram or sacred place (barring all violence and weapons), the security of women, stable tribal relations within Medina.” and so much more.

A Peace Creator Between Enemies

The Prophet taught his followers to exhaust all avenues to peace before fighting:

“O people, do not wish to meet the enemy but rather ask Allah for security. If you meet your enemy in battle, then be patient and know that Paradise is under the shade of swords.” (Sahih Bukhari)

But even after leaving Mecca, the enemies of Islam pursued the Prophet and his followers.

The enemies of Islam would not accept peace, and there came a time for self defense so that this message of justice and equality could be propagated. But even though it came to the point of bloodshed, the Prophet still wanted peace.

In the battle of Uhud, when his enemies attacked the Muslims, Prophet Muhammad suffered a head injury.

When the blood started to seep from his head, he swabbed it saying:

“‘If a drop of my blood fell on the earth, those infidels will be destroyed by Allah.’

Umar told him, ‘O Messenger of Allah, Curse them!’

The Prophet taught us that peace should be sought until those who wish to fight you leave you no other option but to defend yourself and your right to worship Allah (SWT) alone.

But even then, the Prophet showed us how to always leave the doors to peace open.

When the Prophet (peace be upon him) returned to Mecca in victory and having the upper hand, he did not go back to the city looking for revenge.

He went back victorious with an offer of peace.

He didn’t take revenge on the people who had tortured, murdered, and brought war to the Muslims.

Forgiveness and peace were offered and the dua of the prophet: ‘O Allah, Guide my people!’- was answered.

To this day, the descendants of his people are Muslims who love and respect the Prophet for the peace and mercy he brought to them.