The situation in Makkah had become intolerable for the Muslims, as the disbelievers of Quraish intensified their oppression against them.

However, the Second Aqabah Pledge led to the establishment of a small Muslim state in Madinah; and shortly after, Prophet Muhammad (peace be upon him) gave his permission for the Muslims to emigrate.

The emigration to Madinah (known to Muslims as the Hijrah) involved a great sacrifice of wealth, and was wrought with danger, as the emigrants were liable to be robbed or even killed along the way.

Despite this, the Muslims began to emigrate while the polytheists did their best to stop them, knowing full well that the establishment of a strong Islamic state in Madinah was sure to pose a great threat to them.

Almost all the Muslims in Makkah had set off for Madinah, except for Abu Bakr (the Prophet’s closest Companion), Ali ibn Abi Talib (the Prophet’s cousin), the Prophet himself, and those helpless noble souls who had been detained in confinement, or were unable to escape.

Within two months of the Second Aqabah Pledge, entire quarters of Makkah were deserted, and even the Muslims who had previously fled to Abyssinia returned to Madinah to join the rest of the Muslims there.

During this time, the Prophet, Abu Bakr, and Ali were making the necessary preparations to emigrate. On the night of their journey, the disbelievers had plotted to kill the Prophet, stationing many people from different tribes around his house to collectively stab him.

However, the Angel Gabriel came to the Prophet and informed him of their plan.

So in utmost secrecy, the Prophet made his way to the house of Abu Bakr and informed him that Allah (God) had given them permission to leave Makkah (Ibn Saad 227).

Abu Bakr had been hoping for the opportunity to accompany the Prophet on his journey when the appointed time came, and he had prepared two mounts for the occasion.

He informed his daughter Asma that they would be leaving, and she set about preparing the food and drink for their journey in leather bags.

When she went to tie the bags to their mounts, however, she found that she had nothing but her belt to tie them with. Her father told her that she should tear it in two and use it to tie the bags, earning her the name “Dhat an-Nitaqayn” or “she with the two belts” (Al-Dhahabi 523, Ibn Hajar 230, Ibn Hisham 99) 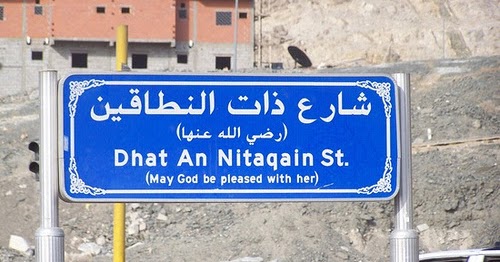 At the time, Asma was a young woman, approximately 27 years old.  Realizing the difficulties that might be faced on their journey, her father took all of his wealth with him, in case he might need it to protect the Prophet, leaving nothing behind for his family.

Surely Asma realized the gravity of the situation. She was left in charge of her younger siblings, without any money in hand, and knowing that when the disbelievers got wind of her father’s departure with the Prophet,  she would be the one to face their wrath.

Anyone else in her situation might have questioned how a father could leave his children in such a state, or demanded that he leave sufficient provisions for them.

However, Asma didn’t show the slightest indication of worry or fear. On the contrary, her actions reflected the depth of her faith and trust in Allah (God).

In fact, after their departure Asma’s blind, elderly grandfather, Abu Quhafah, paid her a visit. He had heard that his son had emigrated, and that he had taken all of his money with him. He asked Asma if it was true that he had abandoned them and left them bereft.

As her grandfather was a disbeliever, he could not understand that for Asma and her siblings, sacrificing for the sake of Allah was an honor. Their faith in Allah would suffice them.

To convince him that they were not left without provision, she took some pebbles that resembled dinars and put them in a pot covered with a cloth and guided his hand to the pot, so that he would believe that it was full of money and rest assured that his son had not neglected them (Al-Dhahabi 523).

The Search for the Prophet

The disbelievers waited all night outside the Prophet’s house to execute their plot to kill him. However, he had already left on his journey, and it was only after sunrise that they realized that he had escaped them.

Abu Jahl, the leader of the disbelievers, quickly headed for Abu Bakr’s home, unaware that he had also already left. He pounded on the door furiously, and when Asma answered, he demanded to know where her father was. She calmly answered:

Abu Jahl  became enraged and slapped her hard on the face, so hard that it sent her earring flying. (Al-Dhahabi 523)

It was a critical moment. Had Asma become afraid, or if she had broken down, the Prophet’s emigration to Madinah might have been thwarted. However, like her father, Asma had strong faith and conviction, and stood firm in the face of one of the most feared disbelievers in Makkah.

Supplies to the Cave

She never let on that not only did she know where they were, but that at night, she herself would make the long, perilous journey  to take food to the Prophet and her father at the cave of Thawr.

After the Prophet and Abu Bakr made it to the cave of Thawr and stayed there for three days, Asma made her way to them by night to bring them provisions for the rest of their journey. (Ibn Hisham 98)

Despite the fact that she was a young woman and pregnant at the time, she was willing to undertake this dangerous journey, and she was meticulous in planning every detail to make sure that she would not be followed or detected, in order to guarantee their safe passage.

Reflecting on the events of the Prophet’s Hijrah to Madinah, Asma bint Abi Bakr is a shining example of faith, reliance on Allah, and courage for all Muslims to follow.

Despite the bounty of one hundred camels that the disbelievers had set for anyone who would bring back the Prophet dead or alive, Allah willed that he would make it to Madinah safely with the aid and assistance of this brave young woman.

Asma risked her own safety to help the Prophet in making the Hijrah that marked the beginning of a new era, a new civilization, and left its mark not only on Islamic history thereafter, but on the history of mankind as well.