Out of the darkness of loss, Muhammad was given a great joy and a great confirmation of his role as Messenger.
aaa

Very often in life we go through periods of trial or great sadness, only to look back on them later and see that they were followed by great happiness or periods of growth.

There is a saying in English that “sunshine follows the rain”.

In the tenth year after the first revelation of the Quran, Prophet Muhammad suffered greatly. First of all, his uncle Abu Talib died. He had loved the Prophet dearly and had protected him from the attacks and the ridicule of the Quraish.

To Muhammad, it was a very severe blow.

Then another tragedy followed. His beloved wife, Khadijah died. Muhammad was grief stricken at such a loss.

It was after both of these events that Allah Almighty granted His Prophet an extraordinary favor. Out of the darkness of loss, Muhammad was given a great joy and a great confirmation of his role as Messenger.

In the Quran we read what means:

Glory to Allah who did take His Servant for a Journey by night from the Sacred Mosque to the Furthest Mosque whose precincts We did bless, in order that We might show him some of Our Signs. For Allah hears and sees all things. (17:1) 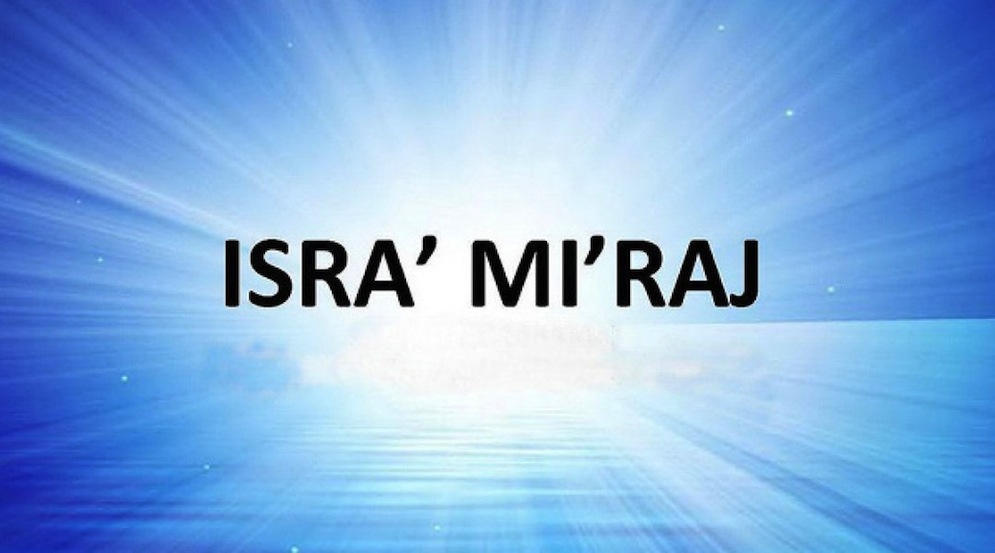 In Arabic we call this al-Isra’ and al-Miraj (The Night Journey and Ascension). It is one of the most extraordinary events to have happened.

Allah took Prophet Muhammad on a night journey from the Ka’bah in Makkah to Jerusalem and then led him through the seven heavens almost to the very throne of Allah Himself.

Muslims celebrate this blessed favor on the 27th night of the month of Rajab.

It began when the Angel Jibreel (Gabriel) descended and woke Muhammad from sleep with Buraq, an animal which could reach the farthest horizon in just one stride.

They traveled to the mosque in Jerusalem and Muhammad tethered the animal outside the mosque. Muhammad then entered the mosque to find assembled there all the former prophets who had ever lived, and he led them in prayer. What a moment of special honor, that Muhammad should stand in front of such an assembly and lead them.

Jibreel then led him from the place we now call the Dome of the Rock and they began to ascend through the seven heavens, encountering former prophets along the way.

In the first level of heaven, Muhammad met Prophet Adam, who greeted him with As-salamu alaykum. Muhammad replied Wa alaykum as-salam and Adam confirmed that Muhammad was indeed the Messenger of Allah. He also looked to his right and smiled and then looked to his left and wept. Those on his right were the believers and those who caused him to weep were the unbelievers.

They then moved on to the second level of heaven, where Jibreel asked for the door to be opened and met prophets Yahya (John the Baptist) and his cousin Jesus who greeted them. Muhammad once again returned their greeting and they confirmed that he was the Messenger of Allah.

On the third level Muhammad met Prophet Yusuf (Joseph) who greeted him.

On the fourth level he met Prophet Idris who greeted him.

On the fifth level of heaven he met Harun (Aaron) who greeted him, the brother of Musa (Moses). He returned their greetings and all three Prophets confirmed that Muhammad was the Messenger of Allah.

On the sixth level of heaven Muhammad met Prophet Moses who greeted him with a sign of peace and testified that he was the Messenger of Allah. After this, Moses began to weep. He said that he was sad because a younger man had been commissioned as a prophet after him and that man’s followers would enter heaven in greater numbers than his own.

When Muhammad reached the seventh heaven he met Prophet Abraham, who declared that Muhammad was the Messenger of Allah. Abraham was resting against Al-Bayt Al-Mamur, a House of Worship around which circumambulate seventy thousand different angels every day.

After this, Muhammad reached the most beautiful tree in heaven: Sidrat Al-Muntaha, whose leaves were the size of elephants’ ears and which was covered by golden moths.

In the Presence of God

The final part of this extraordinary revelation was the greatest of all. No man can look upon the face of Allah Almighty, since He is so great and beyond our comprehension, but Muhammad was taken to within a very close distance to the throne of Allah Himself.

Allah Almighty informed His servant that it was now obligatory on all Muslims to perform prayers fifty times a day. After this, Muhammad was led away by Jibreel, no doubt staggered by all that had been revealed to him.

As he was being led away, the Prophet was stopped by Moses, who asked what he had been told by Allah.

When Moses was told about the obligation to perform fifty prayers, he said that this was too much and was beyond the capacity of any man, so Muhammad should go back and ask that the number of prayers be made less.

This time, Allah Almighty reduced the number of obligatory prayers to five each day. Upon seeing Moses again, Moses urged him to ask that the obligation be lightened even more, since the Children of Israel were unable to fulfill their obligations.

Prophet Muhammad declared that he felt ashamed to ask more from Allah. At that moment, he heard a voice declares:

I have enforced My obligation and made it light for My servants. He who prays these five prayers will be rewarded as if he had prayed fifty. What I decree cannot be changed.

With this the Night Journey and Ascension were over. Muhammad returned to Makkah the next morning and narrated all that had happened to him. When some of the Quraish heard what he said they laughed out loud, calling him a madman.

Those who had visited Jerusalem asked him to describe it, trying to catch him out, but he was able to describe the place perfectly. He was able to tell them of a caravan which he had seen traveling from Jerusalem to Makkah, with exact details.

The very same caravan arrived in Makkah when he said it would, but even this was not enough to persuade those who refused to believe.

For ourselves, we can take the words of Abu Bakr as an explanation of what had happened.

These words of total trust in Prophet Muhammad earned Abu Bakr the title As-Siddiq, one who believes. It is enough for us, too, to accept from our Prophet what he tells us to be true. If only we were as prompt in listening to what he tells us.

Let us rejoice that we have been given the gift of five prayers each day, and that we receive the reward of praying fifty prayers if we perform them well.

And let us resolve to listen attentively to whatever our Prophet says. If he said so, it must be true.