And make mention of Mary in the Book, when she withdrew from her people unto a place towards the east, and secluded herself from them; and We sent unto her Our Spirit, and it appeared unto her in the likeness of a perfect man. She said: I take refuge from you in the infinitely Good, if any piety you have.

He said: I am none other than a messenger from your Lord that I may bestow on you a son most pure.

She said: How can there be for me a son, when no man has touched me, nor am I unchaste?

Ja‘far confidently narrated verses from the chapter of Maryam, as he had been encouraged to, by the Prophet.

He was speaking in front of the Negus, the King of Abyssinia, his bishops, and ‘Amr ibn Al-‘As, a member of the Quraysh sent to Abyssinia to destroy the relations between the Muslims from Makkah and the leaders of their new home.

Ja‘far and some of the Muslims had found refuge in Abyssinia only to be rudely interrupted by ‘Amr and another member of the Quraysh, who were in futile persuasion to have the Muslims returned to Makkah.

But upon the recitation of the verses of chapter Maryam, the Negus King wept, and so did his bishops; all at the mention of Prophet Jesus and Lady Mary in the Quran. Ja‘far, at this juncture, was also moved to tears.

He was precariously balancing the lives of his fellow Muslims and the warmth of the King of Abyssinia in his hands.

Ja‘far ibn Abi Talib had no reason to leave Makkah. His father, Abu Talib, had granted him protection of his choosing of Islam over their forefathers’ beliefs.

He was untouchable by the likes of Abu Jahl and Abu Lahab, and the other men who had mobilized their evil troops to torture Muslims and ambush their gatherings.

Yet Ja‘far, in his mere twenties, was sent by the Prophet himself to lead the envoy to Abyssinia.

Ja‘far and his wife, Asma, were seen as pillars of the forty emigrants, supporting some frail Muslims who were fleeing from oppression.

Ja‘far had grown up in the same household of the Prophet, though significantly younger, was very attached to his cousin who exhumed kindness and generosity towards all around him.

Ja‘far was also said to have been the cousin who resembled the Prophet in appearance the most, thus the rationale for him to take the lead at Abyssinia.

The significance of Abyssinia was the turn of “fortune” for the struggling Muslims, and moreover, the kindness they found in a foreign land, where there were no relatives to open up their homes to them.

Yet, through these foreigners and brethrens of the Christian faith, the Muslims, led by Ja‘far and ‘Uthman ibn Affan were warmly welcomed to practice their faith under full protection.

Even with a very close call of sabotage, the Muslim envoy was saved by Ja‘far’s quick thinking by virtue of Allah. 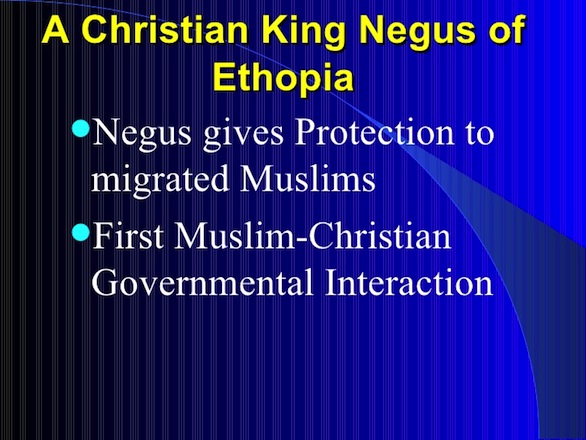 ‘Amr ibn al-‘As stood by Ja‘far’s rendition of chapter Maryam – with gallons of gifts for the Abysinnians to exile the Muslims back to Makkah – completely stunned at the response Ja‘far was receiving from the Negus King and his followers.

Nevertheless, as a proud Quraysh, he had been directed to use the most devious of schemes to break the protection of the Christians over the Muslims.

After the assembly had dissolved, ‘Amr approached the King with a message. He said:

“Oh King, they utter an enormous lie about Jesus the son of Maryam.”

‘Amr then explained that the Quran spoke of Jesus as a mere Prophet and slave of Allah, as opposed to the “Son of God.”

When the Muslims were summoned once again to explain this discrepancy to the Negus, they consulted with each other diligently, before Ja‘far spoke:

“We say of him that our Prophet brought unto us, that he is the slave of God and His Messenger and His Spirit and His Word which he cast unto Maryam, the blessed virgin.”

‘Amr snorted in victory but the Negus King had the last laugh. He said to Ja‘far:

Not for mountains of gold would I harm a single man of you.” Then he spoke to his assistants:

“Return these gifts to those men. I have no use for them.”

‘Amr returned to Makkah, the same way he had left it: with a gallon of bribes fit for a corrupt king; he had certainly not been prepared to be met with kindness and warmth, let alone the prescribed freedom to practice the Islamic faith.

The Negus held Ja‘far and his men in such high respect that when he heard that the Prophet was directed by Allah to wed Umm Habibah, the widowed daughter of Abu Sufyan who had also fled Makkah to Abyssinia, he took it in his honor to solemnize their marriage contract.

Umm Habibah was a pious Muslim and it was through her own dreams that she knew she was to wed the Prophet.

The Negus approached her as the Prophet’s representative, and with Ja‘far, amongst others as their witness; Umm Habibah became the Prophet’s wife.

The Prophet later sent a message to Ja‘far with his envoy to join them in Madinah.

After more than a decade since the emigration, Prophet Muhammad was reunited with Ja‘far ibn Abi Talib, who was now forty years old.

The Prophet was overjoyed to see his cousin, as he kissed him on the forehead when they met at their new home.

Despite being separated for so long from his brothers and sisters in faith, Ja‘far immediately assimilated back into his clan.

But more so, Ja‘far demonstrated a new appreciation for life, after having lived in a foreign land, and learned to love his new found culture thoroughly.

One afternoon, a dispute sparked between him; his brother, ‘Ali; and Zayd ibn Haritha, the Prophet’s adopted son. Prophet Muhammad, who was napping, ventured outside to resolve the argument that seemed to have no end.

The men were arguing for the right to care for Amarah bint Hamzah, Hamzah’s daughter, who had been rescued from Makkah during the recent Muslim pilgrimage.

Hamzah had already been killed and Umarah was staying with ‘Ali and Fatimah.

‘Ali explained to the Prophet that Umarah was his uncle’s daughter and it was Fatimah and ‘Ali who had helped Umarah exit Makkah.

Ja‘far then explained that his wife was Amarah’s maternal aunt, thus his family should be the ones to take care of her.

Zayd argued that Hamzah was his brother (in faith), thus he wanted to be responsible for Hamzah’s family members.

The Prophet listened intently to all their arguments and expressed his pleasure as to their concern and responsibility for Hamzah’s daughter.

He then turned to Ja‘far and said:

“You are like me in looks and character,” and explained to all of them that a maternal aunt is like a mother, and Ja‘far and his wife, Asma, were to take care of Amarah.

Ja‘far said nothing in response but stood up abruptly, and started dancing around the Prophet, startling all three men.

“Ja‘far, what is this?” the Prophet asked incredulously.

Ja‘far continued to live in Madinah with the Prophet and the Muslims, when one day he found out that ‘Amr al-‘As, the same astute politician and general who had battled with him to have the Muslim refugees in Abyssinia exiled, visited the Prophet to say his Shahadah.

The image of Ja‘far narrating verses of the Quran to the Negus had stayed with him for so many years, that he could no longer deny that Prophet Muhammad was only relaying the truth.

‘Amr’s Shahadah was marked one of the happiest moments for the Muslims in Madinah, Ja‘far included.

Martin Lings, Muhammad: His Life based on the Earliest Sources, (1983)