The Prophet was a wise man who offered words to live by and through his actions demonstrated how to live.
aaa

While to many, Prophet Muhammad (peace be upon him) may seem to be a powerful super hero not of this world, when he walked on this earth he was merely a human being who shared the same qualities you and I share today.

While his mission was extraordinary and he was chosen by God to spread His word and help us understand God’s ways, at the same time he shared our humanness. It is in understanding this reality that perhaps we can better appreciate his true power and strength.

When we consider the Prophet as an ordinary man with an extraordinary mission we can better appreciate the gifts he shared and his teachings. We can more easily identify with the Prophet when we see him as a mere mortal, who experienced defeat and harm just as we do, and had the same needs and desires we have, as humans.

When we consider him in this context his extraordinary talents, wisdom and humble ways enable us to see the value in modeling ourselves after him as we go about our daily activities in the here and now. We see in Prophet Muhammad a merciful and compassionate person who, whether witnessing pain or hope in others, responded with love and tenderness.

Prophet Muhammad was an intelligent individual who responded positively to those around him while encouraging them to respect God and follow His ways. He exchanged correspondence with kings and emperors of the world, and with God’s guidance and direction, urged them to leave their arrogance behind and rule their people with justice.

Yet, despite mingling with the mighty leaders of his time, he was also a modest man, who, it is said, responded graciously to the request of a barefoot bedouin who once spoke to him with disrespect:

“Muhammad be just and give me money. It’s not your money, nor your father’s.”

In response, the prophet smiled at the bedouin’s face and ordered to be given the amount of money he requested.

He was a devout and religious man, whose happiest moments were experienced while praying and communicating with God. It is said that once, while praying at length with his companions, he heard a baby crying. The baby’s mother was praying behind the Prophet. In response to the baby’s cry, the Prophet mercifully ended the prayer instantly, enabling the mother to respond to the child’s needs.

We see a man who recognized the power of forgiveness. We see this when he entered the town of Makkah with his huge army without a fight. The Quraysh people had previously tortured him and his companions, exiled him and brutally killed his dearest relatives. As he entered, the Quraysh people stood before him expecting him to take his revenge, instead, he told them they were all forgiven and free from any grudge or revenge. We see in him a caring and humble individual. He once gathered wood to light a fire and prepared food for his companions.

He refused to watch others work while he did nothing and he told them God does not favor those who try to look distinguished among their companions. We see in him a kind and tender man with a merciful heart, who trembled with sorrow when witnessing a horse or a camel struggling with a heavy load on its back. It is said that he encouraged his followers to show mercy to all of God’s creatures and he told them that God says those who are merciful to God’s creatures shall receive God’s mercy:

“Have mercy on those who are on the planet earth and you shall have the mercy of He who is in heaven.” (Abu Dawud)

As for his mercy, to support those in need, who borrowed money, he told the lenders that if they extended the settlement time, or cancelled the dues of the debtor, he would ask that they be pardoned by God on Judgment Day. 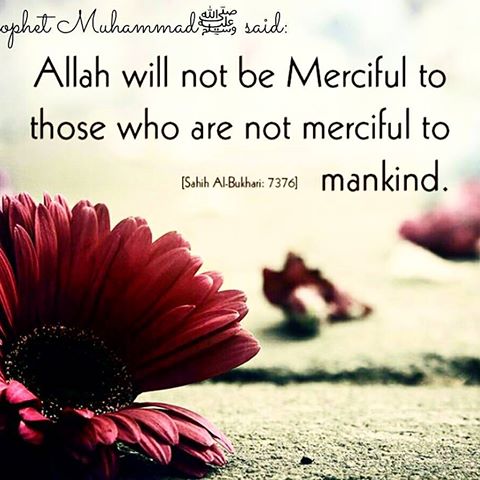 He was a humble man, who admitted that he was not infallible, and was subject to some faults of humanity all men share. He explained that he was human and though he was asked to judge among his people, he could make errors. He knew that it was possible some were more clever in presenting their case than others and he could make a mistake by giving one the rights of another.

He urged that those who were in the wrong not take anything that was not their just right, even if he had mistakenly made judgment in their favor. He believed in the power of love. He urged people to love each other and said that love must prevail among all people. He once said:

He said that one way to demonstrate love for one another is to exchange greetings and gifts. He also encouraged people to respect one another. He cautioned that if three where sitting together, two of them were not to whisper words to each other, as this would cause sadness and curiosity to the third person. He spoke of the value of friendship and told that if a person abandoned his friend for more than a year it would be as if he had shed his blood.

He promoted the virtue of forgiveness and said that the worst people were those who did not accept the apologies of their friends and did not forgive them when they made mistakes. The Prophet believed one could not underestimate the value and importance of friendship and he claimed that supporting a friend in difficult times was better than dedicating an entire month for God’s worshipping inside the Prophet’s Mosque.

We are all God’s creatures and we must serve one another. The positive effects of love on a human’s health have been scientifically proven. The human body’s immune system is weakened by depression, grief, anxiety and nervousness while sentiments of love, hope, calmness and optimism support its health.

______
This article first appeared at Copenhagen Post. It is republished with slight editorial modifications.
We use cookies on our website to give you the most relevant experience by remembering your preferences and repeat visits. By clicking “Accept”, you consent to the use of ALL the cookies.
Cookie settingsACCEPT
Manage consent