What do you do when you can no longer live in an environment that persecutes you for being Muslim?

If the persecution reaches extreme levels and there is real danger to the believers’ lives and families, then leaving the land of oppression for the vast “Land of Allah” is a Qur’anic teaching and a Prophetic tradition.

In the Quran, Allah tells us the story of those who were oppressed but “wronged themselves” because they did not migrate to the “vast Land of Allah.”

When the angels take the souls of those who have wronged themselves, they will ask, “What was wrong with you?” They will answer, “We were oppressed on earth.” The angels will say, “Was the Land of Allah not vast for you to have migrated to some other place? (4:97)

Patience is a virtue which Allah (SWT) loves us to have. But in some extreme cases, such as the case of the Prophet’s (peace be upon him) companions in Makkah in the earlier years, the persecution was intolerable, as detailed in Part 4 & Part 5.

“The series of persecutions started late in the fourth year of Prophethood, slowly at first, but steadily accelerated and worsened day by day and month by month until the situation got so extremely grave and no longer tolerable in the middle of the fifth year, that the Muslims began to seriously think of feasible ways liable to avert the painful tortures meted out to them.” (The Sealed Nectar)

Prophet Muhammad (peace be upon him) was extremely sad to see most of his followers go through all that pain. Out of his love and mercy for them, and the fact that he could not protect them, he searched for an alternative.

In the month of Rajab of the fifth year, he suggested to his Companions who wanted to leave Makkah that they migrate to Abyssinia.

Because it was ruled by a just Christian ruler named Ashamah, the Negus, a fair ruler who would not wrong any of his subordinates.

The first to migrate was a group of around 12 men and 4 women, led by Uthman ibn Affan and his wife, Ruqayyah, the daughter of Prophet Muhammad (peace be upon him).

This was a very difficult decision to make, and a very sad trip separating them from their people and tribe. But it was a sacrifice they were willing to make for the sake of safeguarding their religion and protecting themselves.

Upon leaving Makkah, they headed towards the Red Sea, and reached Abyssinia by boat, where they were welcomed and given due hospitality.

The Second Migration to Abyssinia

Two months later, in the month of Ramadan, Prophet Muhammad (peace be upon him) recited Surat Al-Najm (Chapter 53) in the Ka’bah, and a rumor spread that the people of Makkah had accepted Islam upon hearing these verses from the Quran.

This rumor reached the Muslims in Abyssinia, who decided to return as they assumed the persecution of Muslims must have ended. They headed back to Makkah, arriving in the month of Shawwal.

Around one hour before entering Makkah, they realized that the news they had received was false and that nothing had changed. The majority decided to return to Abyssinia, but a few decided to stay and continued home to Makkah.

When the news of the welcoming environment the Muslims had found in their exile spread, more Muslims wanted to leave Makkah. Prophet Muhammad (peace be upon him) gave them permission to leave. This time there were around 83 men and 19 women.

The Quraish tried their best to stop this new migration. They could not accept that Muslims had found a safe haven in other lands and worried that their reputation would be severely damaged. So, they sent two envoys to the Negus of Abyssinia to try to bring their people back to Makkah.

When Amr ibn Al-‘As and ‘Abdullah ibn Abi-Rabi’ah, Makkah’s two envoys, arrived in Abyssinia, they took the king many presents. They presented their case for expelling the Muslims to the Negus, who then asked to hear the other side of the story.

Speech of The Prophet’s Cousin

Prophet Muhammad’s (peace be upon him) cousin, Ja’far ibn Abi Talib, stood to defend their case and gave a brilliant speech, in which he said:

“O your Majesty, we used to be a people of ignorance. We worshiped idols, ate dead animals, committed great sins, severed family relations, and the strong among us abused the weak. We were like that until God sent from among us a Prophet who was known for his noble descent, honesty, trustworthiness, and decency.

He also ordered us not to commit evil, nor to say false statements, nor to eat up the property of orphans, nor to accuse chaste women of wrong-doing without proof or witness. He has commanded us to worship God alone and not to associate anything with Him, and to pray, give Zakat, and fast. 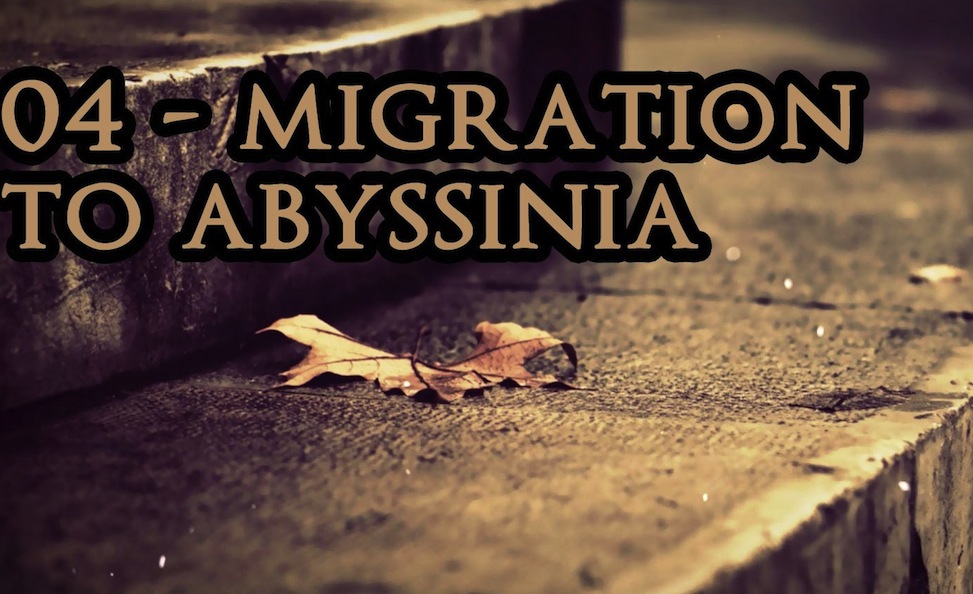 For this reason alone, our people have attacked us, tortured us, and forced us from our religion. They intend to make us revert to the worship of idols instead of praising God. They want us to consider lawful the evil actions which we used to do in the past.

When they tortured us and hemmed us in, and came between us and our religion, we left for your kingdom, choosing you because we need your protection. We hope that we will be treated fairly while we are with you, O King!”

The Ruling of a Just King

The king was impressed by these words. When he asked Ja’far to recite some verses, he recited Surat Maryam. On hearing verses about the story of John, Mary, and Jesus, the Negus and his bishops were moved to tears.

“It appears that these words and those that were revealed to Jesus are from the same source.”

He declined to hand them over to the two Makkan envoys. He said they were free to live in his kingdom and worship as they please under his protection.

In a last attempt before leaving, ‘Amr ibn Al-‘As accused the Muslims of disrespect towards Jesus. The Negus summoned Ja’far, who responded:

“Our belief in Jesus relies on what our Prophet has told us about him; Jesus is God’s servant and messenger who was created by the command of God.”

On hearing this answer, the Negus sent the two envoys away with their presents and granted the Muslims security and peace. They lived in Abyssinia for 15 years before joining Prophet Muhammad (peace be upon him) in Madinah.

Not only that, but on receiving a letter from Prophet Muhammad (peace be upon him), the Negus accepted Islam. When he passed away, the Prophet (peace be upon him) and his Companions prayed the funeral prayer for him. A just king who found the truth and died in peace. May Allah (SWT) have mercy on him. Ameen.

In the next article, we will return to Makkah to re-join Prophet Muhammad (peace be upon him) and his Companions.

The following are some inspiring stories of new converts who found Islam when they travelled abroad.

From Japan to Malaysia: How I Found Islam

I Found Islam in Alhambra

A Tale of Two Hijrahs

An Icelander’s Journey to Light

Jesus (peace be upon him) is mentioned 25 times in the Qur’an. He is one of God’s five most important prophets. Please check the following links for more details on Jesus in Islam:

Jesus in the Bible and the Qur’an

Loving Jesus or Muhammad: Can I Have Both?

The Story of Jesus in Brief

This is What the Qur’an Says About Jesus

3- People of the Book

The Prophet’s Kindness Towards People of the Book

Why Do We Respect the People of the Book?

4- Send us your questions on this series to: [email protected]

As this is a special series for new converts to learn about Islam in a comprehensive way through learning the Seerah (Biography of Prophet Muhammad, peace be upon him) in a gradual chronological way, we will add a few more resources of other areas of Islamic knowledge in each part of the Seerah at the end of each article as extra learning resources.

We will add new videos to this series as we progress from Year 1 to Year 23 in sha’ Allah.

The references we use in each article are given for further details, so please feel free to send us any questions you may have to this e-mail: [email protected]

You may also wish to join our Facebook Group, Islam 101, for further learning and also to interact with fellow new converts and those who are new to Islam here.

Linked by Their Love for Prophet Jesus

Come to a Word That is Just