Prevented from entering Makkah and worship at Al-Ka’bah, deeply disappointed and hurt, Muslims had to take the long way home to Madinah with their purpose of worshiping at the Ka’bah unachieved and long yearning for the Holy City unfulfilled.

A peace agreement signed with the Quraysh was the outcome of their over-two weeks staying at Al-Hudaybiyah, about 9 miles (14.5 km) outside Makkah.

This peace was supposed to last for ten years. Very few Muslims were able to bring themselves to accept it without experiencing a feeling of unease. What added to their bitterness was the fact that they were prevented by the terms of the agreement not by force. Nevertheless, they did put their trust in the prophet’s decision.

Here is always a very important point that if people start to doubt, then they soon find that their doubts dictate their actions. Sound faith means accepting such matters as may appear to be against the immediate interests of the believer, once he is certain that they are required by Islam. At Al-Hudaybiyah, the Muslims were absolutely certain of that because they were receiving direct orders from the Prophet himself.

From the Islamic point of view, being able to talk freely to people and to call them to Islam is much more important than winning battles. It has never been the aim of Islam to conquer countries or subjugate people. Its aim is to win followers through conviction.

Indeed, compulsion as a method of conversion has never been used by Islam or Muslims. Ever since the Prophet started to convey his message, the advocates of Islam have never asked for anything more than to be able to address people freely and explain the principles and the nature of Islam to them.

At Al-Hudaybiyah, the Prophet saw a chance for Islam to achieve that and he was determined not to lose it. After the peace agreement the Prophet was also able to open new avenues to spread Islam outside Arabia. He wrote to the kings and rulers of all the states surrounding Arabia, or ruling in the far corners of the Arabian Peninsula, informing them about Islam and calling on them to believe in it.

Thus, the fact that they agreed to return to Madinah without visiting the Sacred Mosque was made on the understanding that they would be able to do so the following year, so the purpose of their journey was not totally thwarted. It was only put back a year – which, in practical terms, did not constitute such a great concession as the Muslims felt at the time, when passions were running high.

The alternative would have been war which was sure to bring about much worse results. That prospect was totally averted, and this was indeed a great achievement.

The other point which the Muslims found very difficult to accept under the terms of this agreement was the one which stipulated that they should return any person from the Quraysh who came to them declaring that he had adopted Islam, while the Quraysh was allowed to accept anyone who turned away from Islam and joined its ranks.

They bitterly resented this condition and felt that it was humiliating to their young state, and unwarranted. The Prophet, however, was acting on God’s instructions in concluding the peace agreement trusting that God would take care of the Muslims and would turn everything to their benefit.

They asked the Prophet how he could accept such unequal treatment.

“He who leaves us to join them, let him never return to us. If we return to them someone who is a Muslim, God will certainly provide him with a way out of his troubles.” 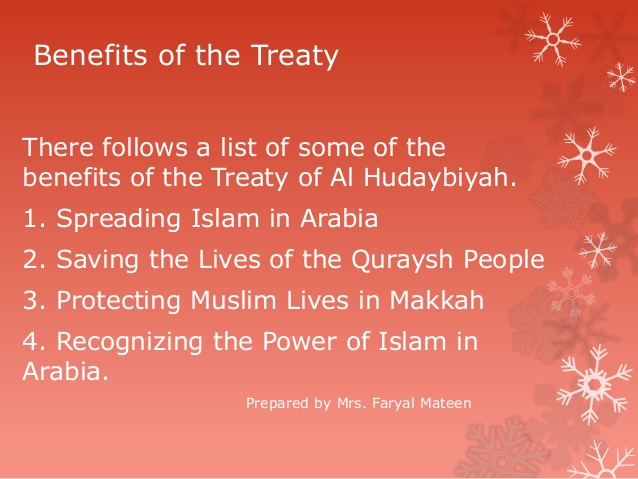 For Quraysh that condition was thought to be its most important face-saver with anyone who might seek to criticize its change of attitude from confrontation to negotiation.

It was not long before the Quraysh started to realize that that very condition through which they sought to save face was the one that would cause the most trouble.

A man from the Thaqif called ‘Utbah ibn Usayd, but better known by his title Abu Busayr (following the Arabian tradition of addressing a man as the father of his eldest son), came to the Prophet declaring that he was a Muslim. Shortly after he had made his escape, two people of his own tribe, wrote to the Prophet requesting that he should honor his pledges by returning him.

They sent their message with a man from the tribe of ‘Amir who traveled with a servant of his. When they gave the Prophet the letter addressed to him, he spoke to Abu Busayr and explained that the Muslims did not violate their pledges or go back on their promises. He, therefore, had no option but to send him back with those two people. He also told him:

“God will certainly provide for you, and those subjugated people like you, a way out of your trouble.”

When Abu Busayr protested that he was being returned to those people who would certainly try to turn him away from his faith, the Prophet could do no more than repeat his words.

Out of obedience and respect to the prophet’s orders, Abu Busayr went with those two people on the long journey from Madinah to Makkah, a distance of more than 500 kilometers. Apparently, Abu Busayr tried to win the confidence of his captors as they travelled on that journey which took several days to complete, giving them no hint whatsoever of what was in his mind.

When they sat down to rest at some stage, the man from the tribe of ‘Amir was playing with his sword and boasting: “I shall work this sword of mine hard in the Muslim tribes of the Aws and the Khazraj one day.”

To this statement, Abu Busayr rejoined: “Your sword must be a very sharp one, then.”

The man said: “Yes, indeed. Would you like to have a look at it?”

Abu Busayr accepted the sword from him thankfully.

No sooner had he taken it in his hand than he started to hit the man hard with it until he had killed him. When the servant saw this, he was absolutely terrified. He ran away towards Madinah and continued to run until he reached the city.

When the Prophet saw him from a distance coming in that state, he said:

“This lad must have seen something horrifying.”

When the servant had caught his breath, he told them what had happened.

Shortly afterwards, Abu Busayr arrived. He greeted the Prophet and said: “You have honored your pledge. God has fulfilled your promises. You have given me up to those people, but I have managed to escape persecution.”

The Prophet told him to go wherever he wished. He again explained that he could not allow him to stay in Madinah because that would constitute a breach of the peace agreement. When Abu Busayr left, the Prophet commented on his action:

“This man would surely cause a war if he had some men to support him.”

Excerpted from Adil Salahi’s Muhammad: Man and Prophet, published by the Islamic Foundation. It is republished here with kind permission and with slight editorial changes.