Beyond the Lote Tree, the upmost boundary is a place where, apart from one exception, no human has ever been.

The night journey and ascension through the heavens culminated in Prophet Muhammad moving past the upmost boundary and standing in the presence of Almighty God. Beyond the Lote Tree is the realm of the hereafter, Paradise, and the throne of God.

The word miraculous does not go far enough in describing what a wonder this must have been for Prophet Muhammad. It is beyond description and beyond imagining. However, the Prophet Muhammad did not see God with his eyes, as God tells us in the Quran:

One of the companions asked Prophet Muhammad directly if he saw God, to which he answered:

He is veiled by light, how could I see him? (Muslim)

The fact remains however, that Muhammad, Prophet of God, stood in the presence of God.

The Importance of Prayer

God spoke to Prophet Muhammad and we have no details of the exchange except that God enjoined the daily prayers upon Prophet Muhammad and his followers. From this, we immediately understand the importance of prayer. It is the only command which God ordained in the heavens; all other decrees originated on earth.

Prayer is a gift from God to those who truly believe in His Oneness. God bestowed this gift upon Prophet Muhammad who in turn gave it to the followers of Islam. It is a gift full of great blessings and bounties. It establishes and maintains our connection to God.

God has no need of our prayers but we, as helpless human beings, are in great need of feeling connected to Him. In fact, the Arabic word for the five daily prayers is salat, which comes from the root word meaning “connection”.

Go back to your Lord and ask for a reduction.

When God prescribed 50 prayers, Prophet Muhammad accepted it, Moses, having had been a great prophet himself, knew from his followers what people could and could not handle in regards to religious obligations. He was sure that the followers of Muhammad would not be able to perform that many prayers. Prophet Muhammad had knowledge, but Prophet Moses at this time had more experience. 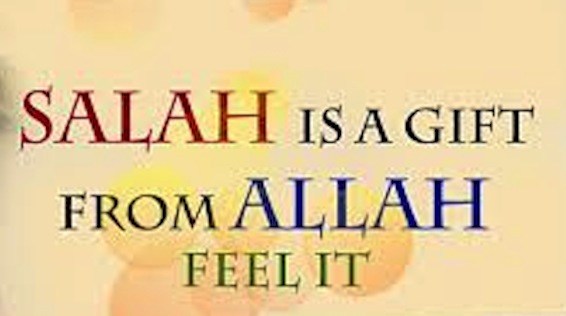 Prophet Muhammad accepted the advice of his older brother/prophet, went back into the presence of God, and asked for a reduction. God reduced them by ten to forty prayers. Prophet Muhammad descended again; Prophet Moses asked him what happened. When he heard that the reduction was only ten, Prophet Moses sent him back to ask again for a further reduction.

O Muhammad, I know people, your nation will not be able to handle it, go back and ask for the burden on your people to be relieved.

He felt ashamed to ask for another reduction and said he was satisfied with five daily prayers. A voice rang out, saying:

The prayers have been reduced to five but they will be rewarded as though they were fifty.

God makes it clear to us that even praying these five prayers can be difficult for some people, but that those who establish the connection and trust that they will one day meet their Lord will find it easy.

And seek help in patience and the prayer: and truly it is extremely heavy and hard except for the true believers in God. Those who obey God with full submission, fear much from His Punishment, and believe in His Promise (Paradise, etc.) and in His Warnings (Hell, etc.). (They are those) who are certain that they are going to meet their Lord, and that unto Him they are going to return. (2: 45-46)

This miraculous night concluded with this sign of the mercy of God. Imagine how hard it would be to pray 50 times a day. Although we learned during this journey that Moses cried when he realized Prophet Muhammad would have more followers than he on the Day of Judgment, we also learn how eager Prophet Moses was to give advice to Prophet Muhammad, and how keen he was to make the practice of Islam easy upon the believers.

The competition between the Prophets was one of love and compassion, and from this we should learn how to treat each other. Although God tells us to compete with one another in doing deeds of righteousness, we should encourage and enable one another to do this easily.

…So strive as in a race in good deeds. The return of you (all) is to God; then He will inform you about that in which you used to differ. (5:48)

Prophet Muhammad then descended back to the Holy Mosque in Makkah.

The companions of the Prophet were now about to face the biggest test to their faith so far. Muhammad, the Prophet of God, was about to reveal that he had returned from an overnight journey to the farthest Masjid in Jerusalem, a journey that normally took more than one month. He was also about to say he had travelled where no man had gone before, through the heavens and into the presence of God.

This was a miraculous journey by night, but would his companions believe him?

And how would his enemies react?