In the last two decades the escalating changes in society and technology have led to the emergence of newly recognized diseases and the re-emergence of known diseases. These include bacterial and viral diseases, and many of them are spread via water, food and air.

Addressing these emerging infections requires a strong public health infrastructure a need for the general populations of developed and developing nations to follow basic hygiene practices. Islam has many traditions and procedures that closely follow the methods of 21st infection control.

In 2014 MIT (Massachusetts Institute of Technology) released their findings on gas clouds released by coughing and sneezing. We now know that gas clouds from coughing or sneezing can stay suspended in the air for much longer than originally thought. The small droplets released these clouds can travel 5 to 200 times further than droplets not from a cough and sneeze cloud. We have been aware for quite some time that indiscriminate coughing and sneezing spreads airborne bacteria and viruses. This new finding however, adds another layer to the reasons why we cover our mouths and noses when we have a cold or flu like illness.

The Quran and the traditions of Prophet Muhammad encourage cleanliness, which covers both spiritual and physical cleanliness. God said in the Quran that He loves those who turn to Him in repentance and purify themselves (Quran 2:222) and Prophet Muhammad described cleanliness as half of faith.[1]

When coughing, sneezing or yawning, a Muslim covers his mouth and nose with a handkerchief or tissue, or his hand. Covering with the hand is acceptable as long as the person follows the Islamic guidelines for hand washing. Prophet Muhammad advised his followers to wash their hands, before praying, before and after eating[3] and upon waking up in the morning[4].

Hygienic habits are intrinsically part of wudu, the ritual washing or ablution a Muslim performs before prayer. Without wudu a Muslim’s prayer is invalid. Wudu involves cleaning the hands, mouth, faces, and arms to the elbow, head, ears and feet. These basic hygiene practices are now known to be integral to good health. 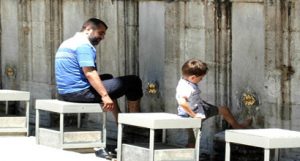 How to make wudu

Many viruses and bacteria infect people only when they enter the nose or mouth. People with diseases transmitted via the faecal-oral route can spread the disease to nearby objects or food if they don’t wash their hands well after using the toilet.

Airborne illnesses spread through droplets in the air, which land on nearby objects. Touching an infected object transmits germs to your hands; touching your nose or mouth with your unwashed hand infects you with the virus or bacteria. Hand washing is now known to be the single most important method of preventing the spread of infection.

Prophet Muhammad advised his followers to wash their hands after several daily activities and before each of the five daily prayers. His recommendations closely follow best practice guidelines promoted by health care workers and facilities across the globe. Prophet Muhammad suggested that when a person wakes up he should not touch anything until he washes his hands[5], touching an object, any object, which is infected with viruses or bacteria spreads infection. He instructed people to wash their hands, both before and after eating[6] and after a person had used the toilet facilities for any purpose. This effectively stops diseases spread by the faecal oral route mentioned above.

Rinsing the nose with water is an important part of a Muslim’s daily life. Prophet Muhammad advised sniffing water into the nose first thing after waking up in the morning[7] and blowing it out in an exaggerated way two or three times. [8] Consistent cleaning of the inside of the nose helps prevent colds, chronic nasal congestion, post nasal drip, frequent sinus infections, asthma and other respiratory ills.

Nose cleanliness is important because the nose processes the air you breathe before it reaches your lungs. Thus your nose protects your health by filtering the air and preventing particles as small as pollen grains from entering your lungs. A nose in a good clean condition does this with 100% efficiency. It humidifies the air by adding moisture to prevent the lining of the lungs and bronchial tubes drying out. And the nose warms cold air to body temperature before it arrives in your lungs.[9] Regularly washing our bodies breathing filter helps to flush out viruses, bacteria, mould, allergens, dust, and mucus from nasal and sinus passages.

Recent research has linked gum (periodontal) disease with the risk of heart disease and stroke. While the research does not say that gum disease causes these conditions[10], several studies have shown that those with gum disease are more likely to suffer from heart disease then people with healthy mouths. The two conditions have some of the same risk factors including smoking, poor nutrition and diabetes, however even in the non-smoking population there is a strong correlation between oral health and heart disease. One theory is that bacteria from the mouth spread throughout the body, worsening inflammatory conditions, such as heart disease, rheumatoid arthritis and type 2 diabetes.

Cleaning the teeth and general oral hygiene was a practice highly recommend by Prophet Muhammad. When he told his followers about the virtues of oral hygiene he mentioned that it was among four things the previous prophets did and recommended, the others being using scent, marriage and modesty.[11] Prophet Muhammad also said that using miswak[12] cleans the mouth and pleases God[13] and that he would have ordered the believers to clean their teeth before every prayer except that he thought it might overburden them. [14]

According to an article in the journal of the National Library of Medicine miswak contains salvadorine and trimethylamine, which are shown to exhibit anti-bacterial effects. They also support gum health and are an effective mouthwash.[15] It is considered to be at the very least as effective as tooth brushing in reducing plaque and gingivitis.[16]

As we have seen in this and the previous articles there are numerous Islamic practices that closely conform to the science of 21st century hygiene practices. These contribute to good health and in Islam the health of the body mind and soul are equally important.

In part 3 we will look at Islamic practices that adhere to current findings on mental health.

[12] A miswak, is a softened small stick cut from the Salvadora persica plant with which the teeth are rubbed and cleaned.