After prophethood, life changed for Muhammad but he was able to conquer his apprehension and excel in this area too.
aaa

Prophet Muhammad is the 7th. Century CE man loved by more than 1.6 billion people in the world today.

He is a man who lived in a time where the strong dominated the weak, female children were buried alive and women were little more than possessions traded from father to husband.

However before he died, the world had been transformed, no longer did the weak perish simply because they were weak, the common person was given a voice, and women were liberated from the shackles that bound them.

The Arabian Peninsula changed; its religion went from paganism and idolatry to worship of One God, tribal quarrels gave way to solidarity and cohesion and drunkenness and debauchery turned into sobriety and piety.

Muslims across the centuries and across the world do not worship Prophet Muhammad; they understand only too well that he is just a man, a human being, like every other human being on this earth.

They also understand that he is a man who excelled in whatever role that was thrust upon him. He seized every opportunity to please God. In the 21st. century CE we have the advantage of being able to look across time and see what an excellent man Prophet Muhammad was and understand how even people who hated him viewed him as a man of exceptional qualities. He was, as the Quran so eloquently stated, a man of excellent character.

{And verily you, O Muhammad, are on an exalted standard of character.} (Quran 68:4)

As a young man, Muhammad was thrust into many different situations and was always successful. As a young orphan boy he worked as a shepherd, and as a teenager he accompanied his uncle, a trader and merchant, as far afield as Yemen and Syria.

It was on these journeys that he learned to be an excellent businessman, gained a reputation for being trustworthy and earned the nickname Al-Amin (the trustworthy).

In his early twenties he began to work for and later married the wealthy businesswoman Khadijah. Together they succeeded in running a prosperous business and raising a family. Even before prophethood, Muhammad was considered to be a man with high standards of morality; he preferred the company of his young family to the decadent and debauched lifestyle that was prevalent around him. 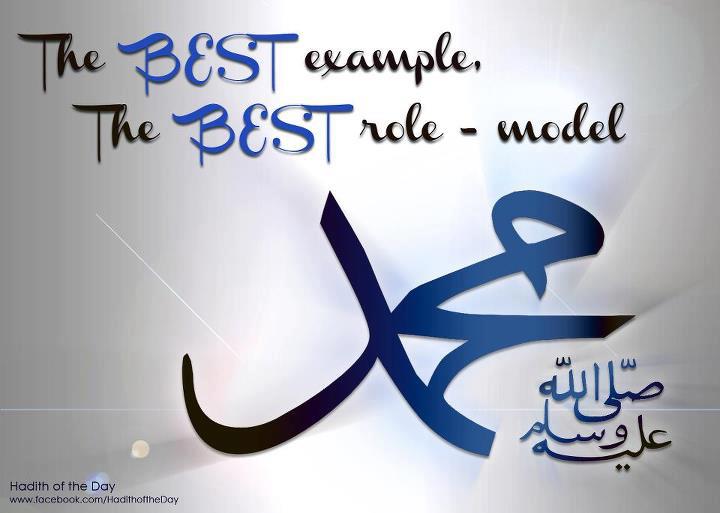 Prophet Muhammad excelled at business and marriage and fatherhood. In fact for some years he lived an enviable lifestyle. Due to his honesty and fair dealings with all people, he also became known as Al-Sadiq (the truthful). He was a gentle and hospitable man whose admirable qualities and kind way of dealing with others made people want to draw close to him.

He was able to deal justly with people and many came to him for advice often asking him to mediate disputes. When he was 40 years old, Muhammad was shocked to find that he was to be the final Prophet of God.

After prophethood, life changed for Muhammad but he was able to conquer his apprehension and excel in this area too. He had a close circle of friends and companions and his excellent way of facing the tests and trials God set before him resulted in his companions and even those on the periphery of his sphere of influence wanting to emulate him.

Prophet Muhammad was acutely aware of what a great responsibility this was therefore he was careful to teach the message just as God had prescribed. He warned his followers not to adulate him the way Jesus, son of Mary was praised. We have here a man not to be adulated but to be emulated; a man who excelled in all roles.

The Encyclopedia Britannica describes Prophet Muhammad as the “founder of the religion of Islam, (and) accepted by Muslims throughout the world as the last of the prophets of God.” They also call him one of the most influential figures in history whose life, deeds and thoughts continue to be debated by followers and opponents.

There are of course many influential figures throughout the history of humankind; however one would be hard pressed to find many that have excelled in all facets of life. Many experts across many fields, both believers and non-believers consider Prophet Muhammad to be a man that did just that, he excelled in all aspects of both his public and private life.

In the 19th. century CE, the French writer, poet and politician Alphonse Marie Louis de Prat de Lamartine had this to say about Prophet Muhammad.

“Philosopher, orator, apostle, legislator, warrior, conqueror of ideas, restorer of rational dogmas, of a cult without images, the founder of twenty terrestrial empires and of one spiritual empire, that is Muhammad. As regards all the standards by which human greatness may be measured, we may well ask, is there any man greater than he?” (Histoire de la Turquie, 276-77)

Also in the 19th. century Thomas Carlyle, a Scottish philosopher, satirical writer, essayist, historian and teacher echoed Lamantine’s opinion when he was “simply amazed” that  “…one man single-handedly, could wield warring tribes and wandering Bedouins into a most powerful and civilized nation in less than two decades.” (On Heroes and Hero Worship)

In the 20th. century CE, Indian philosopher, psychologist, parapsychologist, educationist, teacher, researcher and administrator, Koneru Ramakrishna Rao (b.1932), wrote about Prophet Muhammad. Towards the end of the essay he said:

Earlier in the century, George Bernard Shaw, playwright, critic, political activist and co-founder of the London School of Economics had this to say about the character of Prophet Muhammad:

“The medieval ecclesiastics, either through ignorance or bigotry, painted Muhammadanism in the darkest colors. They were in fact trained both to hate the man Muhammad and his religion. To them Muhammad was Anti-Christ.

I have studied him — the wonderful man, and in my opinion far from being an Anti-Christ he must be called the Savior of Humanity. I believe that if a man like him were to assume the dictatorship of the modern world he would succeed in solving its problems in a way that would bring it the much-needed peace and happiness.” (Collected Letters, 305)

In the following article we will look at and evaluate some of the roles Prophet Muhammad played and excelled at.

Carlyle Thomas, On Heroes and Hero Worship and the Heroic in History, available at Project Guttenberg.