Muhammad so effectively built up a series of alliances among the tribes that, by 628, he and fifteen hundred followers were able to demand access to the Ka'bah.
aaa

The Constitution of Madinah – under which the clans accepting Muhammad as the Prophet of God formed an alliance, or federation – dates from this period.

It showed that the political consciousness of the Muslim community had reached an important point; its members defined themselves as a community separate from all others.

The Constitution also defined the role of non-Muslims in the community.  Jews, for example, were part of the community; they were dhimmis, that is, protected people, as long as they conformed to its laws.

This established a precedent for the treatment of subject peoples during the later conquests.

Christians and Jews, upon payment of a nominal tax, were allowed religious freedom and, while maintaining their status as non-Muslims, were associate members of the Muslim state.  This status did not apply to polytheists, who could not be tolerated within a community that worshiped the One God. 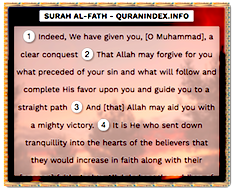 Ibn Ishaq, one of the earliest biographers of the Prophet, says it was at about this time that Muhammad sent letters to the rulers of the earth – the King of Persia, the Emperor of Byzantium, the Negus of Abyssinia, and the Governor of Egypt among others – inviting them to submit to Islam.

Nothing more fully illustrates the confidence of the small community, as its military power, despite the battle of the Trench, was still negligible.

But its confidence was not misplaced.

Muhammad so effectively built up a series of alliances among the tribes that, by 628, he and fifteen hundred followers were able to demand access to the Ka’bah.

This was a milestone in the history of the Muslims.  Just a short time before, Muhammad left the city of his birth to establish an Islamic state in Madinah.

Now he was being treated by his former enemies as a leader in his own right.

A year later, in 629, he reentered and, in effect, conquered Makkah, without bloodshed and in a spirit of tolerance, which established an ideal for future conquests.  He also destroyed the idols in the Ka’bah, to put an end forever to pagan practices there.

At the same time ‘Amr ibn al-’As, the future conqueror of Egypt, and Khalid ibn al-Walid, the future “Sword of God,” accepted Islam, and swore allegiance to Muhammad.  Their conversion was especially noteworthy because these men had been among Muhammad’s bitterest opponents only a short time before.

The Death of the Prophet

In one sense Muhammad’s return to Makkah was the climax of his mission.  In 632, just three years later, he was suddenly taken ill and on June 8 of that year, with his third wife Aisha in attendance, the Messenger of God “died with the heat of noon.”

The death of Muhammad was a profound loss.  To his followers this simple man from Mecca was far more than a beloved friend, far more than a gifted administrator, far more than the revered leader who had forged a new state from clusters of warring tribes.

Muhammad was also the exemplar of the teachings he had brought them from God. The teachings of the Quran, which, for centuries, have guided the thought and action, the faith and conduct, of innumerable men and women, and which ushered in a distinctive era in the history of mankind.

His death, nevertheless, had little effect on the dynamic society he had created in Arabia, and no effect at all on his central mission: to transmit the Quran to the world.  As Abu Bakr put it: