The traditions of Prophet Muhammad undoubtedly encourage involvement in sporting activities as a way to promote a healthy lifestyle and encourage brotherly love and family togetherness.
aaa

Prophet Muhammad said a strong believer was better than a weak believer. He was talking in terms of faith and character but also indicating that physical strength i.e. optimum health and fitness were desirable, providing God gave us the ways and means of attaining such strength.

Islam on Health and Fitness

Islam’s holistic approach to life and thus health offers us the ability to remain strong and healthy. If God decrees that illness or injury are to be part of our lives then Islam provides us  with the ways and means of accepting  and even being grateful for the tests and trials that envelope us.

Believers in Islam must take care of their spiritual, emotional and physical health. God gave us our bodies, the most complex of machines, as a trust. We should not abuse or neglect them.

Diet and nutrition play a big part in maintaining the best possible health, so does a lifestyle incorporating exercise. Islam lays emphasis on a simple diet combined with physical exercise.

Fulfilling the obligations of three of the five pillars of Islam requires that Muslims be of sound health and fitness.  The daily performance of five prayers is in itself a form of exercise, its prescribed movements involve all the muscles and joints of the body, and concentration in prayer relieves mental stress.

Good health is necessary if one intends to fast the month of Ramadan and the performance of the Hajj (or pilgrimage to Mecca) is an arduous task that requires many days of hard physical effort.

The Fitness of the Prophet

Prophet Muhammad advised his followers, to work, to be energetic, and to start their day early, all of which are conditions for a healthy body. He said:

Obesity or an inadequate diet, laziness and weakness are all afflictions for which we will be called to account.  Even though preventing illness or injury is often out of our control, there are many conditions brought on or made worse by our own lack of attention to diet and fitness.

Any action without the remembrance of God is either a diversion or heedlessness excepting four acts: Walking from target to target [during archery practice], training a horse, playing with one’s family, and learning to swim. (At-Tabarani)

The Prophet Muhammad and his companions were naturally physically fit.

The 21st century contains many distractions and forms of entertainment that encourage laziness and induce ill health.

Although advanced technology has many benefits, it is important that time is not wasted in front of the television screen or game console to the detriment of our health.  It has been conclusively proven that obesity in children increases the more hours they watch television. [1]

Other studies have indicated that this is equally true for adults.  Exercise on the other hand has many benefits.

Respected Islamic scholar Imam Ibn-ul-Qayyim stated that movement helped the body get rid of waste food in a very normal way and strengthened the body’s immune system.  He also stated that each bodily organ has its own sport (or movement) that suited it and that horse riding, archery, wrestling and racing, were sports that benefited the whole body. (Zad-Al-Ma`aad) 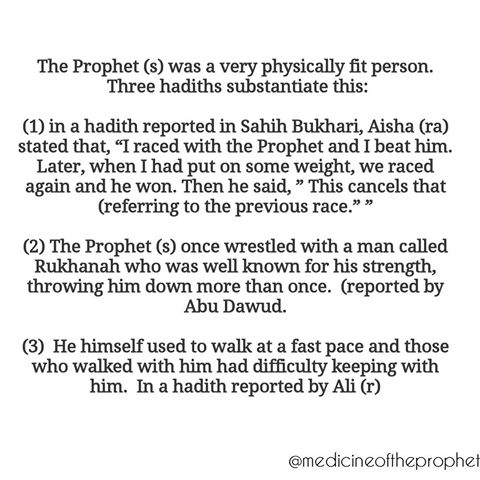 Exercise and fitness play an integral part in the life of a Muslim, however it should not come at the expense of religious obligations, nor should it infringe upon the time spent with family members.

In accordance with the holistic approach to life, which is Islam, moderation must be in everything in life.  There is no allowance for extreme or fanatical behavior.

Letting an exercise regime or a sport take over your life is against the teachings of Islam that call for a middle path and a balanced approach.  Exercise and fitness should also not involve unnecessary mixing of the sexes or wearing clothing that exposes the parts of the body that should be kept hidden.

Islam encourages anything that promotes refreshing the mind or revitalizing the body provided it does not lead to or involve sin, cause harm, or hamper or delay religious obligations.

The traditions of Prophet Muhammad undoubtedly encourage involvement in sporting activities as a way to promote a healthy lifestyle and encourage brotherly love and family togetherness.

In a narration, Imam Bukhari (a scholar who compiled Prophetic Traditions) narrated that:

“The Prophet passed by some people from the tribe of Aslam while they were competing in archery (in the market).  He said to them:

‘Shoot children of Ishmael (Prophet) your father was a skilled marksman. Shoot and I am with so and so.’

One of the two teams therein stopped shooting.  The Prophet asked:

They answered, ‘How could we shoot while you are with them (the other team).’

Shoot and I am with you all.

In another tradition Prophet Muhammad’s beloved wife Aisha mentions their love of games and sports.  She said:

I raced with the Prophet and I beat him.  Later when I had put on some weight, we raced again and he won.  Then he said:

‘This cancels that (referring to the previous race).’ (Al-Bukhari)

A true believer recognizes the wonder of the human body and is grateful to the Creator. Islam’s holistic approach to health covers all aspects of the mind, body and soul.

A truly health conscious person blends diet, nutrition and exercise with the remembrance of God and an intention to fulfill all their religious obligations.