A lot has been said about her, in books and papers, but this book makes a difference.

While excitingly reading the few first pages, my imagination started to take me to places where the very birth of Islam took place. Every page I read, I wanted to know more about this great woman, who was the main pillar of strength for Prophet Muhammad in those early years,- Khadijah.

The book enfolds an in-depth examination of Khadijah’s life: her childhood, lineage, activities as a successful businesswoman, her good mannerism, deeper view of her life with Prophet Muhammad, her sacrifices and great services for Islam.

Though small in size, the book screens the life of Lady Khadijah in details. The wonderful thing to mention about in this book is that the author’s closer study on Khadijah’s life may surprise us about events and news hidden from many of us.

The book is addressed in a lucid and simple language with short and concise sentences that embrace abundant meanings.

The stories and events are cited in harmonious and coherent order. Khadijah’s family tree is leading the book; many old and rare pictures of Khadijah’s old and new houses, Ka’bah, and temple are scattered throughout the book.

Khadijah had many dreams that were interpreted by her cousin and mentor, Waraqah, as signs of the Prophet that was about to be appointed. She once saw a strong light like a moon or sun came into her house radiating out and enlightening the whole universe. To this Waraqa said:

“The last Prophet has entered the world. You will become his family. In your time, he will receive Divine revelation, and his religion will encompass the entire universe. You will be the first of his believers. This Prophet will be amongst the Quraysh, from the family of Hashim.” (23)

Forming the qualities of the “Awaited Prophet” in her mind, Khadijah was searching for a trustworthy man who could carry business on her behalf. She was very happy to find the qualities she was looking for in Muhammad.

It is then when she started her closer investigations with the help of her best servant, Maysara, who used to accompany him in every trip and report every minutest thing he witnessed to Khadijah.

The trip to Damascus, with the help of Maysara’s detailed report, confirmed Khadijah’s expectations that Muhammad was non but the foretold Prophet.

She told her close friend, Nafisa:

“… My heart nearly stopped when I heard what my servant, Maysara, told me, when I listened to what the Priest had to say, and when I heard of the clouds that followed him on his return from Damascus. I believe that he is non other than the awaited Prophet!” (41)

Then clearly sought her help to intervene between her and the Prophet:

“I hope to make our paths meet through marriage, but I don’t know how to go about this.” (41)

Khadijah married Prophet Muhammad at forty years of age, the age when a person reaches a stage of maturity, responsibility, and wisdom. Their marriage was characterized by love, respect, appreciation and cooperation. She was so devoted to Prophet Muhammad’s happiness; she was serving him and always making efforts to comfort him.

When Abu Talib sent his servant Nab’a to see how his nephew was treated, she said:

“What I saw was very interesting. When she saw Muhammad arrive, Khadijah went to the door, welcomed her husband and held his hand saying: “I would sacrifice my parents for you. I know I wouldn’t do this for anyone else but you. I know you are the awaited Prophet. When you see those days, please don’t forget me or my place in your heart.”

“May God be my witness that if I’m that person, I will never forsake you because you have made many a sacrifice for me.” (Qtd. in Ibn Ishaq, Ahbar Mecca, 5/206)

Indeed, the Prophet’s love for Khadijah remained deep down his heart even after her death. He loved her dearly and loved whom she loved. He would say: 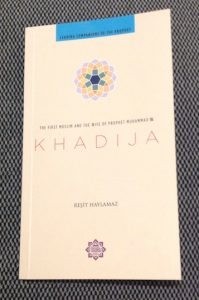 “I also love the ones she loved.”

He once told Aisha:

“Was there any other like her?” “I swear by God that He has not given me anyone as beneficent as she. When people denied me, she believed in me; she affirmed me when people labeled me a liar; when people deprived me, she supported me from her property; and God gave me children through her.” (86-7)

Khadijah: The First Believer and Inspirer

Prior revelation, Prophet Muhammad used to retreat for long periods of time in mountain of Light, Cave Hira, Khadijah would take care of their kids and busy herself with work and other home responsibilities; simultaneously, she would support him in his seclusion and sometimes bring food for him to the cave.

When Prophet Muhammad first met Gabriel, he returned from the Cave with an unusual appearance, trying to explain what happened to him, Khadijah immediately accepted his words and showed him encouragement, reassurance, and comfort:

“Don’t fear! God will undoubtedly protect and keep you. For you look after your relatives, assist the weak, and clothe the needy. You are always generous to guests, you continuously seek after the Truth, and have devoted yourself completely to righteous ways…” (1)

Khadijah displayed an attitude of calmness and confidence when Prophet Muhammad was trembling with fear before her. Having these qualities of comfort she possessed would be a great source of energy and motivation for Prophet Muhammad (peace be upon him) in the first years of his mission.

The fact that Khadijah believed at the very beginning of Muhammad’s prophethood was in itself a great source of relief and support for the Prophet, especially when faced hostility and was accused of being a liar, magician, and Poet.

Being a wealthy businesswoman, Khadijah dedicated all her wealth for Prophet Muhammad and his mission. Not only that, she would arrange dinner parties and host people to hear the message; she played a great role in calling people to Islam:

“In order to be able to fill other hearts with the beauties of faith, she organized many dinner gatherings, reached out to those less fortunate, and sacrificed her vast wealth in the way of God.” (95)

Khadijah would always stand by Prophet Muhammad; she was his source of support during times of hardship.

In the time of the boycott, Khadijah left her wealth and warm bed in Makkah and joined her husband, Prophet Muhammad, and the persecuted Muslims.

She lead with him the most joyous part of his life and decided to never let him alone in times of hardship when he needed her support more than ever.

“Through her support, God eased Muhammad’s load. Whenever a person would speak against him, contradict him, or make an attempt on his life, he would come and find solace in her presence. Her love and loyalty were stronger than the opposition and helped him forget all that concerned him.” (105)

Indeed it was hard for the Prophet to see his beloved wife and supporter leaving this world before him. Her death caused him deep sorrow and pain.

She also was the first source of inspiration and motivation.

She bore hardship and sacrificed her wealth and life for the sake of making her husband’s mission, the message of Islam, widely known when it was followed by only a handful of people.