Prophet Muhammad loved Hassan and Hussein the most, and reminded that whoever loved them loved him, and whoever hated them, hated him too.
aaa

Prophet Muhammad (peace be upon him) named his second grandson, Hussein.

Hussein, is the Little name of Hassan, meaning “the little beautiful one,” which was quite befitting, considering that his elder brother, was by the name of Hassan.

Hussein carried such an important name because of his important lineage. He was the second son of Ali Ibn Abi Talib, Prophet Muhammad’s cousin and father-in-law, a close companion of his grandfather and the first young boy to have embraced Islam at the tender age of ten.

Ali also rose to ranks as a brave warrior who fought for the cause of Islam and later carried the torch of the Caliphate as the fourth rightly guided Caliph. Hussein’s mother Fatimah, the youngest and favorite daughter of Prophet Muhammad, deemed as one of the four most perfect women in Islam. Fatimah is also known as the leader of the female believers in Paradise.

There is no surprise then, through his virtuous parents that Hussein too was a member of the Prophet’s household, as he and Hassan were reported to be the last descendents of Prophet Muhammad after his death.

Hussein is regarded as one of the most iconic Muslim youth, who battled for the sovereignty of the principles in the Quran and the prophetic Hadith to be implemented as the rule of law after leadership of the nation was handed over to a corrupt ruler, Yazid Ibn Muawiyah, the Umayyad Caliph.

Hussein, in many ways, is seen as a rebel, fighting against tyranny to uphold sound principles that were imbued into him throughout his lifetime as a member of the Prophet’s household. He was left alone with only a handful of believers after his brother was mysteriously murdered and fought to the end of his life in the name of Islam.

What causes a young man to become so steadfast in his beliefs that he chooses his martyrdom over the pleasures of the world? Youth around the world face a myriad of problems today, including peer pressure, mistaken identity, thwarted influences that cloud their judgment, temptations that throw them off from seeking knowledge. Drug abuse, nicotine addiction and teenage pregnancies are becoming a societal norm around the world, yet these temptations or problems that the youth face pale in comparison to the obstacles Hussein had to overcome at such a young age.

First, he lost his parents while he was still young, then his brother and confidante Hassan who was mysteriously murdered after pledging his allegiance to the political opposition. When things could not get any worse, Hussein was forced to flee his homeland without second thought after being hunted down alive for refusing to pledge his allegiance to the succeeding corrupt ruler and was forced to meet his enemies in Karbala where he and the last of his family were brutally murdered. 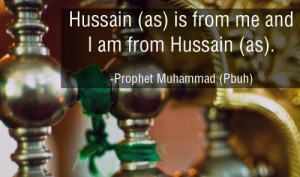 In truth, the roots of Hussein played the most important role in why he grew up to be a staunch Muslim who was unafraid of death – and only feared Allah. Hussein, Prophet Muhammad said, had the best grandparents – the Apostle of Allah and Lady Khadijah. He also had the best parents; and their siblings were the best uncles and aunts the Muslim community had ever known.

Hassan and Hussein thus were regarded by the Prophet himself, as the leaders of the youth of Paradise. Their upbringing, which was filled with love for Allah and the Quran taught Hassan and Hussein that there was no compromise when it came to Islam, their faith that had been perfected by Allah. The boys witnessed first-hand what it meant to be a Muslim, as their parents and grandfather were role models for Muslim men, women and children of their time.

There was no strictness in their surroundings when they were children. They played relentlessly and there have been excerpts where Prophet Muhammad stalled a movement during prostration just because Hussein jumped on his back and rode on him (as if riding a horse). When the Muslims asked if the Prophet had been busy receiving a revelation, the Prophet explained that he was entertaining his grandson, even in prayer.

Children nowadays rarely visit the Masjid, and when they do, they are discouraged, or even forbidden, from entering the prayer hall. When they decide to run around the rows of praying Muslims, they are admonished.

Prophet Muhammad loved Hassan and Hussein the most, and reminded that whoever loved them loved him, and whoever hated them, hated him too. He often invoked Allah to love his grandsons and shower them with His Mercy as Allah had done upon the Prophet.

How many parents, or grandparents, wish the same for their children or grandchildren? Prayers and supplications, especially by parents, are one of the most important parenting tools any parent can have regardless of generation or era. Especially in today’s world where the youth are fraught with social problems, there is no time like the present for parents to fall to their knees and pray for the success for their children in the world and in the hereafter.

Prophet Muhammad encouraged free-play amongst the children during the growing and learning Muslim community in Madinah. As they grew up, the children learned alongside adults and even helped out in their family affairs. They attended lectures and prayers, engaged in political discussions, narrated Hadiths, and went home at night fall to spend time with their families.

A large part of their life was spent in the Masjid, and the large portion of the Masjid was populated by the teachings of Prophet Muhammad. Youngsters became an important part of society because Prophet Muhammad was grooming the youth like Hassan and the little beautiful one –Hussein- to become leaders of the Muslims to come. Hassan and Hussein were amongst the thriving youth that shouldered Islam during its days of glory.

An important aspect of growing a family is to increase the population of pious Muslim men and women, thus it shows how well Prophet Muhammad cultivated that culture, as Hussein lived on as a brave Muslim who shunned all that was tempting and evil, even when he was the only member of the Prophet’s household left.

Hussein is said to be one of the four men who resembled the Prophet so much so that the Prophet once said that he was Hussein and Hussein was him. And even after Prophet Muhammad’s passing, the virtues of the Quran and messages of his grandfather lived on. Hussein, one of the rightly guided Imams, in his revolution, stated that:

“To reform the nation of Prophet Muhammad, one would have to put an end to all kinds of corruption and deviation from the right path so that the nation could be united again”.

Allah’s apostle was reported to have said the same:

“My ummah would not unite in supporting corruption.”

The youth today are distracted by the media, television, reality television, music, make-up and cosmetics. They are distracted by an overdose of sports and video games, by social networking and keeping up with the popular clan. Very few of the youth can effectively disentangle themselves from the problems that exist within their environment that they forget the easiest way out is to turn to Allah and follow the lead of Prophet Muhammad. This stems from the poor environments they are brought up in – as families become less aware of the importance of Islam in their children.

Parents believe that their children are beautiful when they first meet them on their birthdays. They call them “little beautiful ones,” maybe not in so many words, but the feelings of love overwhelm many parents that they truly believe their children are the most beautiful creatures on earth. However the rampant problems the youth face today reflect that parenting is less holistic in nature, and as babies grow up they become less attached to the practices of the Quran and Hadith.

Perhaps it is time to remember how Prophet Muhammad raised his “little beautiful ones” in order to let them flourish into a generation of thriving youth – much like Imam Hussein – who was loved and taught by the divine revelations of the Quran.