Prophet Muhammad stayed with his wet nurse until he was five or six years old and was then brought to Makkah and handed over to his mother.
aaa

After his birth, Prophet Muhammad stayed with his mother Amina for a while and then, as per tradition, was handed over to his wet-nurse.

In accordance with this tradition, Prophet Muhammad was given to Halima bint Abi Dhuayb, who was a member of the Sa’d ibn Bakr branch of the Hawazin tribe. In a year of famine, Halima had gone to Makkah with her husband and other Bedouin women who earned a living through nursing; however, she was unable to find a child from a rich family to nurse. But when she learned that Muhammad had lost his father she did not hesitate to take him, and she agreed to be his wet nurse so that she would not return home empty-handed.

Halima brought Prophet Muhammad back to Makkah two years later; however, Amina wanted her child to stay with Halima for a little longer, as she believed that the desert air was good for her child and, according to some accounts, there was a plague in Makkah.

Prophet Muhammad stayed with his wet nurse until he was five or six years old and was then brought to Makkah and handed over to his mother. Halima’s husband was Harith ibn Abdil ’Uzza. The couple’s children, ‘Abd Allah, Unaysa and Shayma, were the Prophet’s foster siblings.

According to narration, Halima and Harith witnessed great abundance and blessing after taking Prophet Muhammad in their care; their camels and sheep began to provide much more milk than they had before. In addition, the sources reveal that the Splitting of the Chest (shaqq al-sadr) incident occurred during the time Prophet Muhammad was staying with his wet nurse.

This was an event in which two angels descended to earth, split open Muhammad’s chest, removed his heart and purified it from all evils, washing it with heavenly water and then putting it back in its place. It is recorded that when Halima and Harith learned about this incident they were very anxious as they were unable to explain certain extraordinary characteristics of Muhammad that they had witnessed many times before; they now thought that it would be better for the child to be back with his family.

When Prophet Muhammad reached the age of six, his mother Amina took him in her care, and together with her helper Umm Ayman, took him to Yathrib (Madinah). While there, they visited the grave of her husband ‘Abd Allah and the members of the Banu Najjar, who were considered uncles of the family due to ‘Abd al-Muttalib’s mother. After staying in Yathrib for a month Amina, still young at the time, became ill and later died in Abwa –located 190 km from Madinah– while on the way back to Makkah.

Orphaned with the death of his mother, Muhammad was brought back to Makkah by Umm Ayman and entrusted to the care of his grandfather ‘Abd al-Muttalib. Prophet Muhammad revisited Abwa in the sixth year following the Emigration (628 AD) and visited his mother’s grave. Tidying the grave with his own hands, he shed tears as he remembered the affection and compassion of his mother. Greatly affected by his grief, the companions could not hold back their tears and cried with him.

‘Abd al-Muttalib took great care of Muhammad, as the precious gift from his son ‘Abd Allah, who had died at an early age. He would sit at the table and eat with Muhammad, offer him the seat of honor located in the shadow of the wall of the Ka’bah, take him to the meetings in Dar al-Nadwa (Council Hall) over which he presided, and through all his actions, tried his utmost to ensure that his grandson did not feel the absence of fatherly compassion and love. 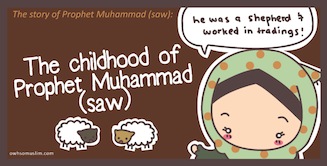 More than eighty years-of-age at the time, ‘Abd al-Muttalib passed away not long after he had handed over the custody and protection of his grandson, then eight years-of-age, to the latter’s paternal uncle, Abu Talib.

Abu Talib loved his nephew more than his own children, believing that the child had brought fortune to the family, and he made great efforts to raise him well. He would take Muhammad with him on some of his journeys. And so, when the Prophet was nine (or twelve) years old and his uncle had decided to go to Syria for trade, he wanted to accompany Abu Talib.

Abu Talib took the Prophet with him on his journey. The caravan stopped in Bosra, located in Syria. A monk called Bahira, living in a monastery, invited the caravan to join him for a meal.

After the monk told Abu Talib that Muhammad was the awaited Prophet foretold in the Bible, he cautioned Abu Talib against some of the dangers that his nephew could face and advised Abu Talib to protect his nephew well. Upon this warning, Abu Talib ended his journey and returned to Makkah.

It is known that when Prophet Muhammad was about ten years old he worked as a shepherd for a period of time in order to help his uncle Abu Talib, who had a large family. He would later refer to this time during his Prophethood saying:

“There has never been a Prophet who did not herd sheep.”

When his Companions asked: “Did you herd sheep O Messenger of God?”

He replied: “Yes. I herded the sheep of Makkah.”

Abu Talib’s wife Fatima bint Asad took great care of Muhammad, caring for him more than her own children. The Prophet never forgot the goodness of his aunt when he grew up. He would visit her in her house in Madinah and would sometimes sleep there in the afternoons.

Very grieved when she passed away, the Prophet used his own shirt for her shroud and personally led her funeral prayer. When speaking of his sadness to those around him, he showed his great sense of loyalty with the following words: