The Prophet's attitude towards women is characterized by chivalry, egalitarianism, love and respect
aaa

I have recently finished writing a book on Muslim women in Britain.

This book discusses many important issues around the role, rights, responsibilities and resilience of Muslim women.

Although this book is written in a Western British context, it discusses core issues that resonate in Muslim communities all over the world – of our collective successes with regard to gender equity and of our failures.

Why do I mention my book here in an article about Prophet Muhammad?

I do so because this is relevant. Throughout the book and in the research that informed this book, it was evident that Islam inherently and irrefutably gives women rights and respect – as equal before God and also in this world. Often however, I have noticed that although Islam gives women rights, Muslims do not. And so we hear about women’s rights abuse ranging from the petty to the serious.

I must however stress here that this is not a problem that is exclusive to the Muslim community. Indeed even in our 21st. century post-modern, post-feminism, post-globalization and post-what-have-you world, women continue to be deprived of their rights – domestic abuse, female infanticide and rape.

I also include in this list ‘less violent’ issues: reduced education opportunities, lower pay scales for women including in the West and lack of recognition of the significance of motherhood. It is deplorable that women who choose motherhood over careers are derided and seen as less successful when perhaps they are among the most successful and satisfied.

Going back to the issue of women’s rights abuse in Muslim community, I am surprised that we hear of such issues despite the example set by the Prophet. His attitude towards women is characterized by chivalry, egalitarianism, love and respect, and yet it is unfortunate that we hear of unfairness towards women in the name of Islam. 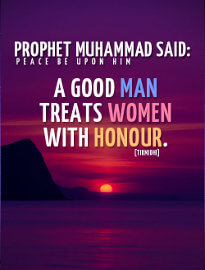 I would have thought that given the example the Prophet set us, Muslims would be beacons of good practice showing the world how to respect and love women.

Indeed I often do hear of Muslim women who are successful in this world and hopefully in the hereafter too – who have had access to education, careers, families, motherhood, rights and respect, and also the support of their men and elders – this is great!

But then ever so often I also hear of women from Muslim communities who are denied these very same things. This is strange given that we are led by a man who respected the rights of women and who encouraged women’s empowerment and participation in society.

I thought about this as I usually do and sat back to read about his life – what would he do?

Inspiration from the Seerah

I read about the man who supported his wife Khadija in business enterprises and who respected her and who loved her. I thought of the man who sought her advice when he returned from the cave of Hira after his first encounter with Archangel Gabriel. He knew Khadija would be able to help him and give him solace – she was a strong and intellectual woman whom he loved all his life. He respected her.

I remembered Aisha, a young girl who was nurtured in the Prophetic household. She was entrusted with carrying forward the message of Islam. Intimate details of the personal manners of the Prophet were entrusted to her with the responsibility of teaching this to all future generations of Muslims to come. She was a woman who became a historically significant personality and he trusted her.

I thought about Fatima and how gentle and tender her father was. How he played with her as a little girl and cared for her. How he sought her approval when one of the best men of that time sought her hand in marriage. He loved her.

These are only three cases from the Prophet’s immediate family and they illustrate relationships of trust, respect and love. We all know of other cases: women praying in the mosque in congregations led by him; women being sent teachers when they complained that they did not have access to Islamic teachings; women who fought in battlefields and women who were celebrated for being mothers – all in our Prophet’s lifetime and usually illustrated by his own egalitarian behavior towards women.

And so to conclude, every time we hear of women being denied respect and rights – whether these are Muslim women or not – as Muslims we must reflect back to what Prophet Muhammad did. We must try in all our weaknesses and faults to emulate his style – justness, fairness, steadfastness, boldness. I say this about the Prophet in many contexts and I say it again in the context of women.

Let us look back to Prophet Muhammad’s life and his example and let us do what he did and then perhaps we shall no more hear of women being abused or deprived of rights or respect.

Well! At least to begin with our own communities and then perhaps we could become, as God intends us to be, examples for the rest of humanity.