Relief came in the form of lightening Prophet Muhammad’s heart and filling him with guidance so that the way to fulfil his mission became clear.
aaa

This is a short, eight-verse chapter revealed in Makkah; its title, The Opening Up or The Expansion is taken from the first verse.  It was revealed shortly after the previous chapter, The Forenoon and is a continuation of the reassurance and encouragement given there to Prophet Muhammad (peace be upon him).  It gives us a glimpse of God’s love for Prophet Muhammad and explains the measures He has taken out of concern for His messenger.  There are also the glad tidings that relief will soon be upon Prophet Muhammad.

Delivering the message caused a great change in Prophet Muhammad’s life; the same society that had previously held him in great honor suddenly turned hostile.  He was used to being treated with respect and now was being showered with abuse.  With every step he faced new difficulties.  Although Prophet Muhammad did get used to the new conditions the initial stages were very discouraging.  Consequently this and the chapter before it were sent down to console and embolden him.

Prophet Muhammad was troubled; there were many obstacles put in his way and the difficulties of his mission weighed heavily on his heart.  He felt as though he needed help and God provided this comforting discourse.

God addressed His beloved messenger saying, “Have we not expanded your breast?” He put Prophet Muhammad’s mind at ease in regards to the message and his mission.  God illuminated his path, and facilitated his journey.  God reassures Prophet Muhammad that He is with him through every difficulty.  He, in just a few words, explains that Prophet Muhammad has been blessed with guidance and light, and submission has been made easy thus there is no need for distress and worry.

Just as God expanded Prophet Muhammad’s chest in such a way that nobody else had ever felt such relief; now He relieves the burden weighing Prophet Muhammad down so badly his back is beginning to feel as if it would crack, in a way devised especially for him.

Relief came in the form of lightening Prophet Muhammad’s heart and filling him with guidance so that the way to fulfil his mission became clear.  The revelation of the Quran helped him to understand and explain the truth of the message so that it was no longer a burden weighing down on him but it was light and becoming lighter.

At the beginning of Prophet Muhammad’s mission, the Makkans, who refused to heed his call, tried everything they could to defame him.  This however only made his name spread further afield.  God exalted Prophet Muhammad above those on earth and in the entire universe.  His reputation became very high when his name began to be spoken whilst coupled with the name of God.  There is no God but God and Muhammad is the messenger of God.  This degree of exaltation is granted to no other human being now, in the past or in the future.  The fact that Prophet Muhammad was chosen for the task of spreading God’s message is an exaltation that cannot be aspired to by anyone else.

God has decreed that century after century, generation after generation; millions of people across the globe will honor the name of Muhammad, Messenger of God.  They honor him with prayers for peace and blessings.  By exalting Prophet Muhammad’s name, God was demonstrating His love for him.

5 & 6 Ease after every hardship 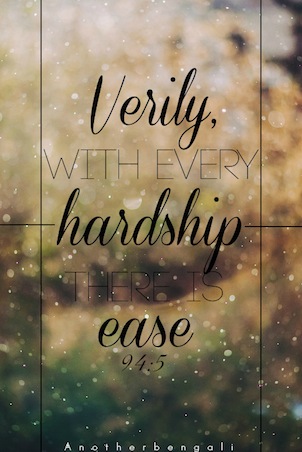 God informs Prophet Muhammad that these bad times will not last forever.  An amazing amount of ease will be associated with every hardship.  These two verses fill the hearts of humankind with gratitude and hope.  As God eases Prophet Muhammad’s burden with these words of comfort so too does He ease the pain we feel.  The pain and heaviness of Prophet Muhammad’s heart is not comparable to the pains of humankind as we go through our trials and tribulations, but God treats us all with kindness and teaches us lessons in the way He dealt with His messenger.

Incredible ease will only arrive, after you go through some difficulty.  Scholars suggest that God was preparing Prophet Muhammad for the difficult journey of fulfilling his mission but also telling him that victory was assured.  According to Arabic grammar these are two sentences describing one hardship.  With every hardship comes two eases, both of them amazing and able to overpower or erase the difficulty or hardship.  The bad times do not last forever, indeed the way hardship and ease are mentioned together suggests that difficulties are not present without ease being close behind.

Verses 7 & 8 Longing for God and Seeking Solace in Him

God tells Prophet Muhammad that when he has finished the difficult work that consumes him by day, he will then be able to do what he has been longing to do.  Worship God.

This devotion and dedication to your Lord will provide you with comfort and fortify you to face any difficulties that may arise the next day.  There are scholars who believe that this also refers to Prophet Muhammad’s death.  When his great work was completed he was able to do what he has wanted to do the whole time.  Be with God and worship Him.