The ummah includes the different ethnicities, cultures, languages, social habits and ways of being that must co-exist within it.
aaa

Compassion is at the heart of Islamic faith and practice.

Every time we recite Bismillahir Rahman nirRaheem (In the name of Allah the most merciful, the most compassionate), we are reminded that Allah possesses unimaginable compassion and mercy and that Allah’s immeasurable kindness is directed towards all of creation, including us human beings.

It is important to remember that this verse comes with responsibility.

It enjoins upon us all to absorb and to reflect some of Allah’s compassion, and therefore to be kind, fair and gentle towards everyone and indeed everything around us.

Previous articles have discussed how habits of compassion may be inculcated in different aspects of our lives: peaceful relations with our neighbors, being kind to children and to those less privileged than ourselves and to the environment – all of which are aspects of Muslim religious duty.

Here we develop this discussion to address the urgent need for peace, kindness and compassion towards each other – the need for compassion within the ummah and for the ummah!

Unity and unity in the Ummah

In his final sermon, Prophet Muhammad (peace be upon him) said that every Muslim was a brother or a sister to every other Muslim.

Together we constitute one ummah – a community or perhaps a fellowship of people who believe – who assert the kalima acknowledging the oneness of our Creator and the nabuwat or prophethood of Muhammad (peace be upon him). Muslims all over the world often discuss this concept of a single ummah that believes in the same Creator and which collectively feels the happiness and pain of every individual within it.

And hold fast to the rope of Allah, all of you together, and do not be divided; and remember Allah’s favor on you, that when there was enmity between you, He created affection between your hearts, so due to His grace you became like brothers to each other; and you were on the edge of a pit of fire (hell), so He saved you from it; this is how Allah explains His verses to you, so that you may be guided. (Quran 3:103)

Everyone seems to know what the ummah is… but do they?

What we do not discuss is that the ummah is not just about similarity – the same beliefs that all Muslims have, the same texts that they read, and the same acts that they do.

It is also about diversity and how Muslims are extremely different from each other. 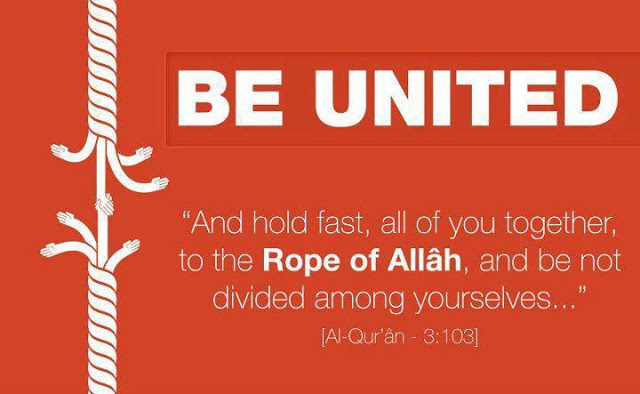 The ummah includes the different ethnicities, cultures, languages, social habits and ways of being that must co-exist within it. Notwithstanding this diversity, we hold on to the rope of Allah.

There are those within the Muslim community who believe that the rope of Allah belongs to a particular group or school of thought within Islam – most often the ‘rope’ becomes the property of the group that they belong too.

Such particularist who believe that their way is the only way, do a disservice to Islam. They limit a divinely-ordained way of life to boundaries and limits set by mere mortals.

A perusal of the Quran and the Hadith demonstrates that Islam is vast and wonderful, and that it is capable of absorbing and including the diversity within it.

In his final khutbah, Prophet Muhammad (peace be upon him) also instructs us to dismantle the social hierarchies that put one human being above another on the basis of race, financial status or gender.

In the Quran, Allah (SWT) makes it clear that the only differentiation between human beings is on account of their righteousness. The advice that our beloved Prophet (peace be upon him) gave us was to transcend our diversities and differences. In piety and peace, we must sustain the Islamic deen or way of live.

Our beloved Prophet Muhammad leads us to Unity, to our Creator who is Al Wahid (The unique) and Al Ahad (The one). In doing so he also leads us to unity within the ummah, among its diverse people, languages and cultures. Thus the ummah is not only a theological concept, it is our praxis, our way of life.

Malcolm X eloquently and inspiringly captures the beauty of a diverse yet united ummah in his oft-quoted description of the Hajj:

“There were tens of thousands of pilgrims, from all over the world. They were of all colors, from blue-eyed blondes to black-skinned Africans. But we were all participating in the same ritual, displaying a spirit of unity and brotherhood.

[…] During the past eleven days here in the Muslim world, I have eaten from the same plate, drunk from the same glass, and slept on the same rug – while praying to the same God.”