Small acts of kindness, although it might be trivial in the eyes of people, are an important means for us to be saved from Hellfire and admitted into Paradise.
aaa

One of the most beloved qualities of good character to Allah is kindness and gentleness. Allah has reserved a special reward for those who are kind and gentle.

Aisha reported: The Messenger of Allah (peace be upon him) said:

“O Aisha, Allah is gentle and He loves gentleness. He rewards for gentleness what is not granted for harshness and He does not reward anything else like it.” (Muslim)

Kindness and gentleness are traits that are inherently good, and whoever has them has been given his portion of goodness.

Allah loves kindness and gentleness in all matters, so we should manifest these qualities even when we face abuse and cruelty. On one occasion, the Prophet was insulted and cursed by his enemies but he did not return their curse. Rather, he showed patience and forbearance and encouraged his companions to be kind.

“A group of Jews asked permission to visit the Prophet and when they were admitted they said:

“Death be upon you.”

I said to them:

“Rather death and the curse of Allah be upon you!”

“O Aisha, Allah is kind and He loves kindness in all matters.” (Al-Bukhari)

Indeed, Allah sent Moses and Aaron, peace be upon them, to Pharaoh and He commanded them to speak mildly to him and to begin their invitation to Islam with gentleness.

Prophet Muhammad (peace be upon him) was commanded to begin inviting the unbelievers of Mecca to Islam with gentleness, even though they were plotting against him and the Muslims.

For this reason, the Prophet was patient and forbearing with their abuse for more than twenty years. Only after the persecution became so intense was he allowed to fight back in self-defense. Even so, the Prophet was given clear instructions to accept their repentance or at least accept their offer of peace.

{If they repent, establish prayer, and give charity, let them go their way. Verily, Allah is Forgiving and Merciful. If any one of the idolaters seeks your protection, then grant him protection so that he may hear the words of Allah. Then deliver him to his place of safety. That is because they are a people who do not know.} (9:5-6) 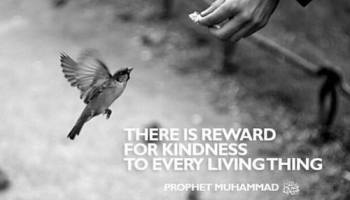 Thus, the door of mercy and gentleness is never closed, as even the worst of criminals are given the opportunity to repent and make amends.

Furthermore, kindness and gentleness should be shown to the animals and indeed all of creation.

“I was upon a camel which was misbehaving so I began to beat it. The Messenger of Allah, peace and blessings be upon him, said:

Small acts of kindness, although it might be trivial in the eyes of people, are an important means for us to be saved from Hellfire and admitted into Paradise.

“Shall I not tell you for whom the Hellfire is forbidden? It is every person accessible, polite, and mild.” (Sunan At-Tirmidhi)

Therefore, we should train ourselves and our children to be kind and gentle in all matters, among the Muslims, among unbelievers, and even with the animals. We should resist the temptation to indulge in cruelty and savagery.

We ask Allah to beautify our manners with kindness and to protect us from falling into harshness.