With the world around us in endless change, materialism hitting hard and gadgets here and there; humans themselves are more and more transforming into gadgets.

People are becoming more secluded and insensitive to each other’s concerns and well being. This starts from a smaller scope within the family and then widens within neighbors, coworkers, and all the way to human rights violations in the form of injustice and wars.

And as much as is notoriously publicized that Islam is a religion of terrorism, Islam never calls to injustice. It is a religion of mercy. Allah Almighty manifests this clearly in the Holy Quran addressing Prophet Muhammad (peace be upon him): {And We have not sent you, [O Muhammad], except as a mercy to the worlds.} (21:07)

Glory to Allah, he sent the Prophet (peace be upon him) not just as a mercy to Muslims but to the entire worlds including not only Humans (be them Muslim or not) and Creatures but even to Jinn. If we role model this characteristic then justice would prevail in Universe. Let’s have a closer look at his mercy (peace be upon him).

Prophet Muhammad’s Mercy with his Wives

If a man would take the treatment of Prophet Muhammad (peace be upon him) as a role model there would be harmony in every household. The Prophet Muhammad (peace be upon him) would help his wives physically with household chores and soothe them emotionally as well like for example when Aisha had her menses he would be extra gentle with her like for example when he took her cup and looked for the mark from where she drank and drank from it as well.

Even psychologically he would provide support. He addressed Aisha’s jealousy in an incident in Seerah where she was hit by jealousy, by not rebuking her but merely commenting:

“Your Mother [of the believers] was jealous.”

It is narrated that Abu Hurairah (may Allah be pleased with him) said:

“We were praying ‘Isha’ prayer with the Messenger of Allah -prayer and peace of Allah be upon him- when he prostrated Al-Hassan and Al-Hussain would jump on his back, when he rises with his head he picks them gently from the back and places them (on the floor) kindly, so when he returns (to prostration) they return to what they do, and when he ended his prayer he would put them on his thighs.” (Declared good by Al-Albani 3325, Al-Silsila Al-Sahiha)

When he (peace be upon him) hears a child crying while he’s praying he would lighten his prayer so the mother could finish prayer and carry him, see what he needs so he would stop crying. He said:

“I rise up to pray, with the intention to elongate my prayer, thereupon I hear the cry of a child which makes me shorten my prayer disliking to make it hard on his/her mother.” (Al-Bukhari)

Also, when the Prophet (peace be upon him) sees a child that needs to be disciplined then he will deal with them tenderly and kindly without shouting at them or scolding them. Omar Ibn Aby Salamah said:

“I was a little boy sitting on the Prophet’s lap and my hand is all over the plate, then the Messenger of Allah -prayers and peace of Allah be upon him- said to me:

“O boy, say ‘Bismillah’ (In the name of Allah), eat with your right hand and eat from what’s in front of you.” (Agreed upon)

Prophet Muhammad’s Mercy with his Neighbors

“He will not enter Paradise from whose harm his neighbor is not safe.” (Muslim) 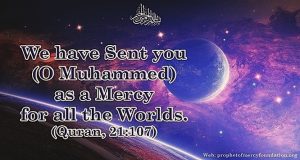 Not only was Prophet Muhammad (peace be upon him) kind and gentle himself with animals but furthermore he motivated us to do so as well as an act of worship with immense reward and cleansing of sins as in the story of the prostituting woman who quenched the thirst of a dog and thus was expiated from her sins as compared to a religious one who prayed and did charity, etc. but as she mistreated her cat her good deeds were not accepted.

Prophet Muhammad’s Mercy with his Enemies

This indeed acts as the biggest challenge, showing mercy to those who harm you. Prophet Muhammad (peace be upon him) was often challenged with harsh treatment from enemies of this new religion but he always acted with nobility.

“Was there ever a day that was worse for you than the day of Uhud?”

“I suffered at the hands of your people, and the worst that I suffered from them was the day of al-‘Aqabah, when I presented myself to Ibn ‘Abd Yaleel ibn ‘Abd Kulaal, and he did not respond to what I wanted. So I went, with signs of distress on my face, and I did not recover until I was in Qarn al-Tha’aalib, where I lifted my head and saw that a cloud was shading me. I looked and saw therein Jibraa’eel (peace be upon him), who called me and said:

“Allah has heard what your people said to you, and how they have rejected you. He has sent to you the angel of the mountains, so that you can tell him to do whatever you want to them.”

Then he called the angel of the mountains to me and he greeted me with salam, then said:

“O Muhammad, Allah has heard what your people have said to you, and I am the angel of the mountains. Your Lord has sent me so that you can tell me what to do. What do you want? If you wish I will bring together the two mountains of Makkah to crush them. The Messenger of Allah (blessings and peace of Allah be upon him) said to him:

“Rather I hope that Allah will bring forth from their loins people who will worship Allah alone, not associating anything with Him.”

The tribe of Quraish were archenemies of Islam and, for a period of thirteen years while he was still in Makkah, they would rebuke the Prophet (peace be upon him), taunt and mock him, beat him and abuse him, both physically and mentally.

They placed the afterbirth of a camel on his back while he prayed, and they boycotted him and his tribe until the social sanctions became unbearable. They plotted and attempted to kill him on more than one occasion, and when the Prophet (peace be upon him) escaped to Madinah, they rallied the majority of the Arab tribes and waged many wars against him.  Yet, when he entered Makkah victorious with an army of 10,000, he did not take revenge on anyone. The Prophet (peace be upon him) said to the Quraish:

“O people of Quraish!  What do you think I will do to you?”

Hoping for a good response, they said:

The Prophet (peace be upon him) then said:

“Then I say to you what Joseph said to his brothers: ‘There is no blame upon you.’ Go!  For you are free.”

It is frustrating that some Muslims act as though the teaching of Prophet Muhammad (peace be upon him) does not encompass them and fail to incorporate them practically into their lives. Injustice has become so sickly prevalent not just among non Muslims but unfortunately among Muslims as well.

Nevertheless, mercy still exists among Muslims within Muslims and also with non Muslims. For example, we have strong advocates such as Linda Sarsour, executive director of the Arab American Association of New York.

Sarsour has been called a “champion of change” by the Obama administration as she not only works with Arabs and Muslims but is moreover actively engaged with the community as a whole through community development, youth empowerment, community organizing, civic engagement and immigrants’ rights advocacy.

Another great act of mercy was an incident in which a Houston, Texas mosque was burned down by a non Muslim and later when he was arrested and pleaded guilty in an act of mercy the mosque pardoned him for his ignorant behavior.

We also have a strong network of Muslims in the Muslim Community here in America for example, that when someone falls sick or has just delivered, etc. food is dropped at their door from lovely community members and when someone needs financial help it is collected in a glimpse from here and there from Muslims you might have never encountered that are so eager to help.

We are also so blessed to have such organizations such as ICNA, MLFA, CAIR, ISLAMIC RELIEF, HELPING HANDS, etc. that work meticulously on a wider scope with financial, educational, legal, etc. benefits to the Ummah of which Prophet Muhammad (peace be upon him) said:

“The parable of the believers in their affection, mercy, and compassion for each other is that of a body. When any limb aches, the whole body reacts with sleeplessness and fever.” (Al-Bukhari and Muslim)