I wrangled my youngest daughter, finally managing to secure shoes onto her plump little feet as they wiggled and kicked.

It was 2:25 pm; time to leave to pick up my children from school.

It was also time for my little one to have a nap, which meant she was particularly squirmy and uncooperative.

Breathless, I managed to coax her out the door. I lifted her into her car seat and rushed around to the driver’s seat.

When I turned the key, nothing happened. The battery was dead.

I instinctively looked around at my neighbor’s houses, realizing I was in a predicament and would need someone to help.

My two closest neighbors, both in proximity and affection, were clearly absent, their driveways bare. My eyes raised and lingered on my rear-view mirror. The neighbors across the street were home.

I had never formally met my neighbor across the street.

I hung my head and groaned, ashamed for not having initiated a relationship earlier. For having been so apprehensive and avoiding a proper introduction. I hated the thought of only approaching them because I was in need of assistance. I felt like kicking myself.

My children would be waiting at school for me, and the minutes were ticking away. I slowly disembarked and straightened myself out. I hesitantly walked down our long driveway, clearly headed for the neighbor’s house.

She was outside and caught sight of me. I shyly introduced myself and told her my battery had died. She enthusiastically sprung into action. I walked back home and watched as she and her husband drove their big green utility van into my driveway to give my car a jump-start.

My apologies were brushed away with reassurance. They were both clearly delighted to help, and pleased to finally meet me. They gifted me an emergency kit in case I ever wind up in a bind on the road, complete with my very own set of jumper cables. They gave me a card with their names and numbers and assured me they were always there, should I need them for anything.

Some months later, my youngest daughter, spunky as she is, had wandered off by herself and was headed straight for the road. The very same neighbor saw her before I did. She ran across the street and brought her home. She later returned with bottles of bubbles for each of my children. 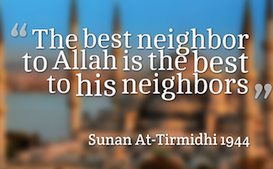 As they squealed with excitement, gleefully chasing and popping the iridescent orbs, I realized why neighbors have been so elevated, and their good treatment so emphasized in Islam.

I can think of numerous cases where each of my immediate neighbors were there for my family. The day my children accidentally disturbed a hornet’s nest, I was inside, tending to the stings of one screaming child and I couldn’t hear the cries of two more children outside who had subsequently been stung.

My next-door neighbor, hearing their distress, jumped the fence, ran to their aid, comforted them and brought them to me. She was also the one who came on another occasion, to take care of my children until my husband rushed home, while I rode in the ambulance with my oldest son, whose head was gushing blood from a cut.

From homemade cookies, to friendly smiles, to pleasant chats over coffee, our neighbors are what make this neighborhood home.

Home should be a peaceful, safe place we can feel happy to enter and heartsick to leave. Our neighbors are the closest to us in proximity, and thus, they are the closest to our everyday lives. When we are in need, they are nearby. It only makes sense to foster this relationship and to make it a strong one.

Allah has emphasized – rather, commanded – goodness to neighbors in the Quran when He said

The prophet Muhammad (peace be upon him) said:

Islam protects and strengthens the foundational aspects of life. We have been given guidance at the individual level, and for every human structure or system that extends beyond the individual.

It is recorded in Sahih Al-Bukhari and Muslim that the prophet Muhammad said:

“Gabriel continued to advise me to treat neighbors well until I thought he would make them heirs.”

This illustrates the actual closeness of our neighbors and is indicative of the stellar treatment we ought to be giving them.

Our Most Merciful Lord has provided beautiful and simple guidance for us regarding our neighbors, to enable this aspect of society reach its full potential.

The prophet Muhammad, who was nicknamed “the Trustworthy” and “The Truthful” by his contemporaries, provides more than enough for us as an example to be the best neighbors we can be.

Below are 10 actions from the sunnah of the prophet Muhammad we can all implement today, to begin to make our neighborhoods more beautiful, pleasant and our relationships within it, more substantial and endearing.

“I never came across a person who smiled as much as Prophet Muhammad. (Shama’il)

Prophet Muhammad regarded smiling to a brother as an act of charity.

Give and Receive Gifts Graciously

Several accounts record the prophet Muhammad encouraging giving gifts to promote love as well as to remove hostility and resent.

When Aisha asked him who she should give her gifts to, he said the neighbor who was closest to her.

When you prepare a meal, consider your neighbor at the outset. Make extra with them in mind. The Prophet Muhammad instructed Adu Dharr:

“When you prepare the broth, add water to it and give that to your neighbor.”  (Muslim)

“Whoever believes in Allah and the Last Day should speak a good word or remain silent.” (Al-Bukhari and Muslim)

Be Hospitable, Generous and Welcoming

Invite you neighbors over appropriately.

“And whoever believes in Allah and the Last Day should show hospitality to his neighbor.” (Al-Bukhari and Muslim)

Be Neat and Clean

Both the Quran and Hadith exhort us to keep ourselves neat, clean and presentable. Likewise, our homes should also be kept neat and tidy.

The Muslim home should not be an eyesore in the community. Keep your grass cut and your house well maintained. Be simple, yet consistent with the style of your neighborhood when it comes to decor and landscaping.

Our neighbors should feel secure with us and know we will honor our commitments. Allah has encouraged us with immense reward in the Quran:

And they who are attentive to their trusts and their promises, and carefully maintain their prayers – Those are the inheritors, who will inherit al-Firdaus. They will abide therein eternally. (Quran 23:8-11)

Stay in Touch and know the Condition of your Neighbors

Check in on your neighbors, especially those who are vulnerable or lonely. As neighbors, we are required to help those in need.

“A man is not a believer who fills his stomach while his neighbor is hungry.” (Authenticated by Al-Albani)

Loud parties, kids playing loudly outdoors too early on weekends – anything that may irritate your neighbors should be avoided. We never want to be the one the other neighbors complain about.

“By Him in whose Hand is my life, no, bondsman (truly) believes till he likes for his neighbor, or he (the Holy Prophet) said: for his brother, whatever he likes for himself. (Muslim)

“He will not enter Paradise whose neighbor is not secure from his wrongful conduct.” (Muslim)

As I discovered with my neighbors across the street, it’s never too late to begin being a better neighbor, or to begin a healthy relationship.

May Allah help us be the best neighbors, and may He help our neighborhoods thrive – Ameen!

(This article is from Reading Islam’s archive and was originally published at an earlier date).