As Muslim mother, Dubai-based author Zenubia Arsalan has always lamented the lack of Muslim superhero books for her children, books which relate with their faith, values, identity, and dreams.

This serves as a perfect inspiration for Arsalan to put pen to paper, giving Muslim children a superhero.

“Books are mirrors, and our children should see a reflection of themselves in them,” Zenubia Arsalan told The National on Sunday.

It is not only her kids. Arsalan has always yearned to have her own superhero books since her own childhood in Pakistan.

“Growing up, I did not see myself or my faith represented in the books I read and even at that time it perplexed me,” she says.

“Fast forward many years, as a parent and as a curator of children’s books for our story circle, I felt a dearth of books that were interesting and fun to read out loud while covering topics that are integral to our beliefs and values.”

The final push was when her eight-year-old daughter asked her what names to call characters in her creative writing homework.

“I suggested names like Aisha, Ali, and Fatima, but she dismissed them as ‘very silly names for characters’ and went on to give them very English names and set her story in the English countryside.” 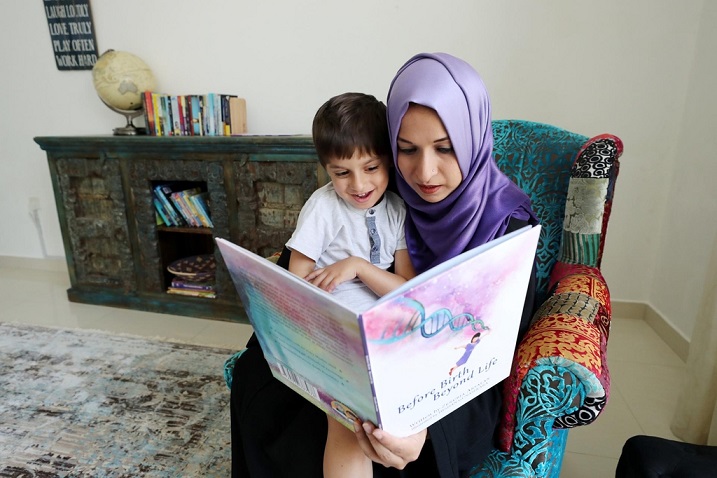 Motherhood has been a huge inspiration for Arsalan’s storytelling. Her first book, Before Allah Made You (previously known as Before Birth, Beyond Life), came as a result of two profound questions her own children asked her so many times.

Another book is ‘The Cosmos That Allah Has Designed’. Her third and most recent book, Between Fear and Hope: A Muslim Child’s Journey, will be released in August

She portrays the central character as a mini superhero, dressed in a cape, and the book is illustrated in comic-book style to help convey this empowering message that all children have the potential to be a superhero.

“Culturally, there were only a few professions that parents approved of and children were forced into professions they didn’t quite own,” she says.

“With this book, my hope is that both the parents and the children look at the bigger picture and define their aspirations in terms of how they can create value in the lives of others,” she adds.

“It is important for children to read books with characters they can identify with and see themselves through,” he said.

“This helps them with their self-confidence and, more importantly, it helps them set their internal compass for many values such as standards of beauty, what is culturally and socially acceptable.”