Called “one of the oldest systems of personal development encompassing body, mind and spirit” by the Journal of the Royal Society of Medicine, yoga has become one of the fastest growing health trends today. It has been renowned for centuries for its curative powers of movement.

Yoga consists of a number of “asnas,” or body positions, which one retains for a desired length of time while either reciting “mantras” or breathing in a rhythmic manner. Its benefits have been researched by many doctors who now recommend it to their patients, by many medical schools such as Harvard, and by many foundations such as the Menninger Foundation.

In fact, yoga has become so popular that secretaries have developed a simplified sitting version that they can do at their desks. The elderly, pregnant women and athletes also have their own versions.

Interestingly, for the millions of people enrolled in yoga classes, the Islamic form of prayer has provided Muslims for fourteen centuries with some of yoga’s same (and even superior) benefits. This simple form of “yoga” offers physical, mental, and spiritual benefits five times a day as Muslims assume certain positions while reciting Qur’an and athkar (remembrances).

Of course, not all the yoga positions are found in the Islamic prayer. However, hospital researchers have concluded that patients benefit from even a simplified version of yoga, and most hospital yoga programs, such as those at the Spaulding Rehabilitation Center in Massachusetts, consist of only five to seven positions.

The Muslim prayer has five positions, and they all (as well as the recitations we make while performing the prayer) have a corresponding relationship with our spiritual and mental well being, according to modern scientific research. The benefits of performing specific movements and recitations each day come from the correct rendition of the position or action itself, the length of time the position is held, and from careful and correct recitation techniques.

Each of the five prayer positions has a corresponding yoga position, and the positions together “activate” all seven “chakras” (energy fields) in the body. The idea of activating a chakra may sound linguistically strange, but it is easier to understand once one translates that word into more familiar language.

Eastern healers believe that each of the chakras correlate to major nerve ganglia that branch forth from the spinal column. Thus, the concept of activating these nerve centers is akin to getting a chiropractic adjustment or installing a medical stimulating device on the spine to correct corresponding bodily malfunctions.

In layman’s terms, the idea of chakras can be understood by thinking about how the sense of “feeling” functions. One notices, when touching any part of the body, that that part responds by being more “awake” and aware. Another part of the body that was not touched, but is along the same nerve pathway, may also respond.

When a person is sitting, for instance, they may not be thinking about their legs, which are momentarily at rest; however, if someone touches them, they will again be “aware” of them. Chakras work in much the same way.

Studies have found that varying areas of the body, when activated by touch, movement or thought, evoke specific emotional and physical responses in much the same way that a smile can evoke the feeling of happiness, and actually increase circulation – even if one was feeling sluggish and unhappy before smiling. This is one of the reasons that it is so important to perfectly perform all of the movements of the Islamic prayer, rather than haphazardly rushing through them.

The Takbir and Al Qiyyam together are very similar to the Mountain Pose in yoga, which has been found to improve posture, balance, and self-awareness. This position also normalizes blood pressure and breathing, thus providing many benefits to asthma and heart patients.

The placement of the hands on the chest during the Qiyyam position are said to activate the solar plexus “chakra,” or nerve pathway, which directs our awareness of self in the world and controls the health of the muscular system, skin, intestines, liver, pancreas, gallbladder and eyes. When the hands are held open for du’a, they activate the heart “chakra,” said to be the center of the feelings of love, harmony, and peace, and to control love and compassion. It also governs the health of the heart, lungs, thymus, immune system, and circulatory system. 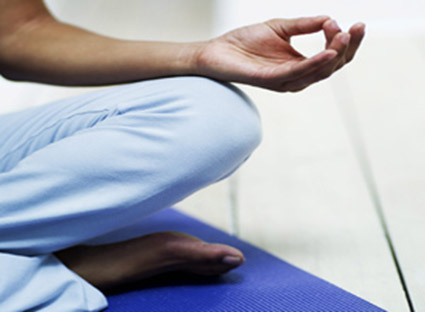 Muslim researchers have shown that when Muslims recite the Qur’an, old thoughts, feelings, fears and guilt are released or healed, and blood pressure and stress levels are reduced. Virtually all of the sounds of the Arabic language are uttered while reciting Qur’an, creating a balance in all affected areas of the body.

Some specific sounds, in fact, correspond to major organs in the body. In his research and creation of eurhythmy, Rudolph Steiner (founder of the Waldorf Schools), , found that vibrations made when pronouncing the long vowels, ‘A’, ‘E’ and ‘U,’ stimulated the heart, lungs, and the thyroid, pineal, pituitary, and adrenal glands during laboratory tests.

The position of Ruku is very similar to the Forward Bend Position in yoga. Ruku stretches the muscles of the lower back, thighs, legs and calves, and allows blood to be pumped down into the upper torso. It tones the muscles of the stomach, abdomen, and kidneys. Forming a right angle allows the stomach muscles to develop, and prevents flabbiness in the mid-section.

This position also promotes a greater flow of blood into the upper regions of body – particularly to the head, eyes, ears, nose, brain, and lungs – allowing mental toxins to be released. Over time, this improves brain function and ones personality, and is an excellent stance to maintain the proper position of the fetus in pregnant women.

The Sujud is said to activate the “crown chakra,” which is related to a person’s spiritual connection with the universe around them and their enthusiasm for spiritual pursuits. This nerve pathway is also correlated to the health of the brain, nervous system, and pineal gland. Its healthy function balances ones interior and exterior energies.

In Sujud, we also bend; thus activating the “base chakra,” which controls basic human survival instincts and provides essential grounding. This helps to develop levelheaded and positive thinking along with a highly motivated view of life, and maintains the health of the lymph and skeletal systems, the prostate, bladder, and the adrenal glands. We also bend the “sacral chakra” during Sujud, thus benefiting and toning the reproductive organs.

The position of Al Qaadah, (or Julus) is similar to the Thunderbolt Pose in yoga, which firms the toes, knees, thighs, and legs. It is said to be good for those prone to excessive sleep, and those who like to keep long hours. Furthermore, this position assists in speedy digestion, aids the detoxification of the liver, and stimulates peristaltic action in the large intestine.

Last, but not least, the “throat chakra” is activated by turning the head towards first the right and then the left shoulder in the closing of the prayer. This nerve path is linked to the throat, neck, arms, hands, bronchials, and hearing – effecting individual creativity and communication.

It is believed that a person who activates all seven nerve pathways at least once a day can remain well balanced emotionally, physically and spiritually. Since this is the goal of all sincere Muslims, we all should strive to attain the perfection of stance, recitation, and breathing recommended in the Hadith while performing our prayers – the very same techniques of perfection taught in popular yoga, Tai Chi, and many other exercise classes.

This article was first published in 2009 and is currently republished for its uniqueness.