Bisexual people or pansexual/omnisexual aka polysexuals are individuals who are romantically and physically attracted to members of both sexes or any gender.

Oppositely, monosexuals are persons who are attracted to one gender only, while asexual (or nonsexual) people are individuals who lack sexual attraction to anyone or suffer an absent of interest in sexual activity. It may be considered the lack of a sexual orientation.

These are the most common types of sexual orientations in human beings. However, people tend to confuse sexual orientation with gender identity, which is defined as a “personal conception of oneself as male or female (or rarely, both or neither)”.

This concept is intimately related to the concept of gender role, which is defined as “the outward manifestations of personality that reflect the gender identity”. In laymen terms, gender identity is what one believes to be.

In English, transgender is defined as, “denoting to a person whose self-identity doesn’t conform unambiguously to conventional notions of male or female genders”.

Dr. Paul McHugh, a psychiatrist at the John Hopkins Medical School, USA said that people who self-identify themselves as transgendered are those who are born with a typical male or female anatomy, but “feel” as though they have been born into the wrong bodies.

As we all know, each of us is born into a specific gender of either male or female, with the exception of intersex individuals, who anatomically display the characteristics of both sexes at birth.

Intersex is when someone, whether male or female is born with ambiguous genitalia, or in some rare cases, where an individual is born with both ovarian and testicular tissue simultaneously.

Gender identity refers to a person’s internal and personal sense of being a man or a woman, even though, for transgender people, their external and internal senses don’t match.

Researchers at Boston University School of Medicine, USA said that transgender people are believed to experience Gender identity disorder, which affects as many as 1 in 100 people1.

The occurrence of this disorder is significantly rare, and causes serious personal conflicts and depression that start as early as preschool and 50%2 of the time lead to suicidal thoughts by mid thirties.

Psychosocial reasons were the once prevailing theories behind transgenderism. This sexual definition was believed to be triggered by dysfunctional family dynamics or physical abuse of the individual; and these triggers lead to epigenetic and biochemical changes.

Although still a theory, some new genetic researches oppose the psychological theories and suggest that the underlying cause of transgenderism is rather genetic.

For any variance caused in sexual orientation of individuals leading to a crisis in gender identity, scientists believe a combination of psychological, genetic, hormonal, and environmental influences – factor into the cause of sexual orientation.

A 2008 discovery by Australian researchers, who were primarily researching transgender women (women with male anatomy), revealed that the receptor gene associated for the sex hormone testosterone was longer, causing insufficiency in the uptake of male hormones during the fetus development in the womb, leading to a feminized brain.

However, this isn’t enough to prove that being transgender is completely natural because for instance, the brain’s white matter is also known to be shaped by the acquired experiences, obtained traits, environment and the performance of the individual.

So, who do transgender people find as their soul mates? Do transgender men opt for individuals who are biologically and mentally men? Sexual orientation is determined by the gender one is attracted to.

When the transgender women consider themselves to be women in a man’s body, then they will be naturally inclined towards men, and would be hence perceived as homosexual (attracted to same sex individuals).

However, this isn’t their real identity. Transgender people tend to have conflicting feelings concerning their physical appearance and their perception of themselves.

Homosexuals on the other side cannot be considered trangender as they don’t suffer a gender identity disorder, but rather they are physically and emotionally attracted towards people of the same gender—there is a big difference.

Islam clearly encourages the medical and scientific solutions to correct the sexual orientation of individuals to make them live naturally as normal creatures, and Islam is totally against homosexuality which is a sin. 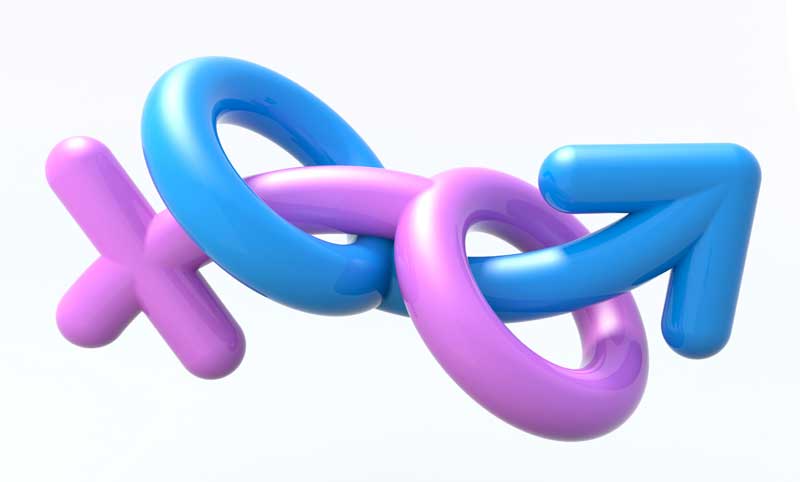 According to a number of Muslim Sunni scholars, some people whose transgender condition is legitimate are required to undergo reassessment surgery in order to better conform; as taking a specific role as a female or a male is a vital contribution of an individual to the human society.

In Muslim communities, people are usually expected to behave with the sex that they are assigned to anatomically and to conform to the roles that their biological gender commands of them.

Though a questionable hadith as a number of Muslim Sunni scholars ranked it as weak and others judged it as sahih/strong, a prophetic hadith tackling this topic was narrated by Abu Hurayrah says: “A mukhannath (transgender woman) who had dyed his hands and feet with henna was brought to the Prophet.” He asked: “What is the matter with this man?” He was told: “Apostle of Allah! he affects women’s get-up.” So he ordered regarding him and he was banished to An-Naqi’. The people said: “Apostle of Allah! should we not kill him?” He said: “I have been prohibited from killing people who pray.” Abu Usamah said: Naqi’ is a region near Medina and not Al-Baqi. (Sunan Abu-Dawud, Book 41, Number 4910).

In analysis of the hadith, it can be understood that the Prophet (PBUH) asked for banishing that individual to avoid any spreading of strange homosexual identities that would cause social deformity and incoherence which will result in destroying the natural family system and thus the extinction of the human society.

Today there are options like gender reassignment surgeries and hormonal therapies that have been made available that weren’t once available before to correct the sexual orientation.

Cultural norms and traditional readings of sacred texts govern Muslim communities and uphold a heteronormative binary of gender identification and sexual orientation that don’t allow for the non-heterosexual identities of people.

According to a number of Muslim Sunni scholars, some people whose transgender condition is legitimate are required to undergo reassessment surgery in order to better conform; as taking a specific role as a female or a male is a vital contribution of an individual to the human society.

In addition to the previous classifications, there are some other sexual-related definitions which must be clarified to stop confusion.

A bisexual specie like human beings (Homo sapiens sapiens H.s.s) with unisexual organisms; is a specie which has males and females with separate and different gonads that makes them capable of producing only male or female gametes (sex cells) but never both, this case is named Gonochorism.

While a unisexual specie is one in which all its individuals are of the same sex.

Moreover, there is nothing in fact biologically as a ‘Third Gender’; the term is used culturally as a synonym for intersex individuals who are also named as androgynies, ambigender, polygender, co-genders, genderqueer, multigender, intergendered, pangender, gender fluid and many other synonyms with the similar meaning in different languages.

This article was first published in 2016 and is currently for its importance.