Certainly sleep is one of the blessings from Allah. At the end of a busy day a person looks forward to sleeping and regaining enough energy for the next day. Sleep is also important for good health and safety reasons. However, studies vary as to how much sleep is enough. Some studies claim 8-10 hours is a requirement for everyone.

However, the Prophet Mohammad (saws) used to sleep very few hours in the night and used part of the night for prayer. Studies confirm that this may actually be healthier for some people.

Sleep is important for health and safety reasons. Lack of sleep can lead to mental illness, relationship problems, absence from work and even traffic accidents.

Researchers have found that people with chronic insomnia are more likely than others to develop several kinds of psychiatric problems, and are also likely to make greater use of healthcare services (Yang).

Lost productivity due to sleepiness has been estimated to cost the national economy as much as $100 billion annually and the National Highway Traffic Safety Administration has estimated more than 100,000 auto crashes annually may be fatigue related (Yang).

Because of this, some studies claim that 8-10 hours should be required for everyone. However, studies have confirmed what the prophet Muhammad did may be healthy for some people.

“…the Prophet slept for a part of the night, (See Fateh-al-Bari page 249, Vol. 1), and late in the night, he got up and performed ablution from a hanging water skin, a light (perfect) ablution and stood up for the prayer (Bukhari).”

Modern studies show that this may actually be the best advice for many people. In fact, many studies are showing that less sleep or even lack of sleep can be healthier in some cases.

A six-year study of more than a million Americans shows that a good night’s sleep lasts seven hours. It also showed that people who sleep for eight hours or more tend to die a bit sooner. Study leader Daniel F. Kripke, MD, says,”You really don’t have to sleep for eight hours and you don’t have to worry about it. It is evidently very safe to sleep only seven, six, or even five hours a night (DeNoon).”

Kripke and co-workers analyzed data from an American Cancer Society study conducted between 1982 and 1988. The study gathered information on people’s sleep habits and health, and then followed them for six years. Study participants ranged in age from 30 to 102 years, with an average starting age of 57 years for women and 58 years for men. In the study the death risk for people with too much sleep was 34% as compared to only 12% for those who slept 8 hours and only 22% for those who had too little sleep.

These findings are similar to those in the dietary realm that show that eating too much food is much more harmful than not eating enough (of course massive extremes such as starvation and not sleeping at all are not included in this discussion). Kripke even noted that, “For 10-hour sleepers, the increased risk of death was about the same as that for moderate obesity.”

Some studies have even experimented with sleep deprivation to cure depression. Up to 60% of depressed people will show a 30% improvement after just one night awake, according to a review article published in the January 1990 issue of the American Journal of Psychiatry.

People who feel the most depressed in the morning and improve later in the day seem to benefit the most from a night without sleep (Yang). However, keeping people up all night is not a long-term solution and researchers often found a relapse in people once they went back to “normal” sleeping hours.

Further research showed that one reason staying up all night worked was because sleep inhibits the thyroid stimulating hormone (TSH) that helps control our metabolism and, indirectly, our levels of energy. An estimated 25% to 35% of depressed patients have low TSH levels.

A research has shown that while sleep inhibits the release of TSH, staying awake through the night and the early morning hours boosts it. This scientific research is completely in accordance with the habit of the prophet (saws), which was to sleep shortly after Eisha prayer (earlier than most people sleep nowadays), and wake in the very early morning hours (sometimes as early as midnight) again to pray. 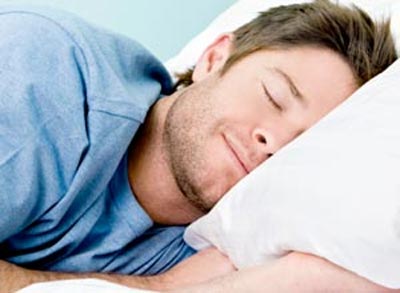 Ibn ‘Abbas said, “The Prophet slept till he snored and then prayed (or probably lay till his breath sounds were heard and then got up and prayed).” Ibn ‘Abbas added: “I stayed overnight in the house of my aunt, Maimuna, the Prophet slept for a part of the night, (See Fateh-al-Bari page 249, Vol. 1), and late in the night, he got up and performed ablution from a hanging water skin, a light (perfect) ablution and stood up for the prayer. I, too, performed a similar ablution, then I went and stood on his left. He drew me to his right and prayed as much as Allah wished, and again lay and slept till his breath sounds were heard. ”

This is similar to the therapy given to depressed patients in Europe who are told to sleep early for a week, awake at midnight and then ease back into a “normal” sleeping schedule by waking a bit later each morning, but no later than sunrise (Yang).

If you already feel you don’t have enough sleep you may wonder, though how less sleep can make you feel better. Oftentimes sleep problems are related to sleep quality rather than length of sleep. Things a person can do to improve their sleep quality is: eat at least two hours before bedtime, change to healthier dietary habits, check with a doctor about possible sleep apnea, snoring issues, or TMJ, sleep on your side, avoid alcohol and sedatives, lose weight and find a comfortable mattress.

So how do you know how much sleep you need? Many people instinctively feel what is right for them. If you feel great after 7 hours, but feel tired if you get five hours or nine hours then you know that seven is your “ideal sleep” time. However, sleep requirements may also vary with life events. During travel or personal trauma or illness sleep requirements may increase.

John McDougal, author of several dietary books, offers a further distinction between people who need more or less sleep. He says in his book The Quick McDougal Cookbook, that healthy people usually need only 5-7 hours of sleep a night.

This, in fact may be the reason many people think they need more sleep. Bad dietary habits can cause sleepiness. One such example is the heavy feeling one gets after eating a large meal or the drug-induced state that bread causes in some people. Dr. McDougal says that as long as a person is healthy they should need less than 8-hours of sleep.

Medical science seems to be saying that if you need more than 8 hours of sleep you need to work on some dietary issues and strive to need less sleep. Even the prophet (saws) spoke against extremes in sleep deprivation and told men who stayed up all night for days on end praying, that they needed to moderate their habits and also get some sleep.