After reading the previous article, I pray that many of you may now comprehend the concept of the hydrogen bond, and the incredibly simple, yet profound process through which it arises. However, the hydrogen bond is a relatively weak bond.

In fact, it is so weak that it is susceptible to changes in the surrounding environment such as heat, pH (level of acidity) and detergent (soap)…

So what is the use of such a weak bond to us?! Do we not want the more strong covalent bonds to be more prevalent in our body..To make us invincible! Well, not quite..

Before delving further into this, we must have a bigger picture of the context in which our cells incorporate hydrogen bonds. I will focus here on the importance of hydrogen bonds to our DNA.

In simple terms, DNA is a very very very biiiiiiig molecule. Remember, a molecule is just a number of atoms bound together, so H2O (water) and O2 (oxygen) are also molecules.

Although DNA is such a large molecule, if broken up into its building blocks, you will find that it is made up of only four smaller molecules called Nucleotides. These are named Adenine (A), Guanine (G), Thymine (T) and Cytosine (C). They all have a similar ‘backbone’, but differ structurally in one part called the Base (see Fig. 1). 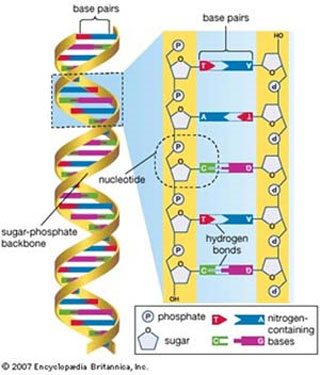 Another thing about DNA is that it is not just a single strand of nucleotides, but two strands. Moreover, these two strands are wound up together like a hair-braid into a helical shape, called a ’double helix’.

If you imagine that each strand has a ‘start’ and ‘end’ position, then you should understand when I say that the strands are antiparallel, i.e. the startposition of one strand is bound to the end position of the other.

Finally, and perhaps more importantly, is that what holds the strands together are the bonds between the paired bases. Not surprisingly, these are the very same hydrogen bonds (see Fig. 1)!

Again, the structure of each of the four bases, coupled to the intrinsic properties of the atoms that make them, result in the formation of partial charges, the consequence being that bases on one strand can weakly bind bases on the opposite strand.

Wait a second, from what we hear about the importance of DNA, should it not be tightly bound together with something a bit stronger than hydrogen bonds? What would happen to our cells if internal forces cause the DNA strands to break apart?

The answer is simple..They would divide!

You see, our cells can be in two broad states, either dividing or non-dividing. Compared to our days in our mothers’ wombs when all our cells were dividing to make us up, most of our cells as adults are thankfully not dividing.

This is the main problem with cancer by the way; uncontrolled cell division. However, even as adults, we still need some cells to continue dividing in order to replace old and worn out cells, such as skin or blood cells.

Anyways, back to DNA. There are two situations where we really need to ‘open’ our DNA and take both DNA strands apart. One of these situations is when a cell is dividing. As the name suggests, everything in a cell must divide, and our DNA divides in quite an extraordinary way.

I will not go through the detailed mechanism right now, but suffice to say that both strands must be unwound and taken apart, starting locally in many areas in the middle of the DNA molecule and moving along the DNA strand as it is unwound, making a complementary copy of each strand along the way, ultimately resulting in two DNA double helices, each with one old (parent) and one new (daughter) strand (see Fig. 2)[1][2].

Wait a second, what does ‘complementary’ mean?

(Fig. 2 DNA replication). When replicating its DNA, a cell unwinds the double helix and synthesizes two new complementary strands. The resulting helices will contain one old strand and one new strand.

The two strands are bound together simply by the bonds between the bases on each strand. However, are bases on one strand randomly bound to bases on the other, or is there a certain order?

Needless to say, it is not a random process. In fact, if we ponder the meanings of a few verses in the Qur’an, we may see that nothing is created arbitrarily, and that randomness may just be what we do not yet understand. Carefully read the following translations of the Qur’anic verses:

Now regarding DNA, the rule is that A pairs with T, and G with C. So whenever you have an A on one strand, you will find a T in its place on the opposite strand, and so on (see Fig. 1 and 2). This way, if you only have information on one strand, it is quite easy to determine the sequence of the other complementary strand (See fig. 1).

This turns out to be an invaluable technique that our cells use, among others, to repair ‘errors’ in our DNA that cause the information on one strand to be lost. The cell then uses the information on the other strand to insert the correct nucleotides in the damaged strand [3], [4][5].

In the previous article, we mentioned that hydrogen bonds are much weaker than other types of bonds. This means that the forces holding the DNA strands together are individually not that strong.

However, when you have literally millions of hydrogen bonds side by side, their combined strength surely increases. It is much easier to break one stick than a bunch of sticks tied together.

That is why when the DNA strands are separated (e.g. when a cell divides), they are done so locally, and the double helix is unwound one part at a time, as it requires a lot of energy to unwind and separate the whole of the DNA molecule before replicating it.

Scientists have exploited the susceptibility of hydrogen bonds to heat in a process called Polymerase Chain Reaction (PCR). In this process, DNA strands in a large pool of double helices are separated by heat, after which only a targeted piece of DNA is replicated.

This cycle is repeated many times until there is so much of the targeted DNA sequence that it can be easily detected by simple techniques. In other words, this technique simply fishes for a specific DNA sequence in a large pool of DNA. If it is found, so much of it is made that it simply stands out.

This is quite remarkable, as it can be used to detect scarce virus DNA both in human cells as well as in certain plants, therefore helping diagnose illnesses early enough to increase chances of a cure, and determining if a crop is diseased or not, respectively, saving both lives and money.