Although it has always been a cause of controversy whether or not the motives of some of these wars were self-defense and noble reasons or other causes, the thing that baffled scientists the most was the absolute dedication and high spirits that all of these warriors were fighting with. Muslims are most proud of their battles, deservingly so, since what occurred, during those battles, is close to miracles, and incredibly fascinating.

One of the most famous examples of these sorts of victorious battles in the history of Islam is the Battle of Badr, or Ghazwat Badr, which happened on the 13th of March, 624 CE/ 17th of Ramadan 2 AH. Another well-known and celebrated battle which also occurred during the holy month of Ramadan is the 6th of October War in 1973 when Egypt defeated the Zionist state and devastated its army.

Those two battles are some of the most legendary battles written in the books of history, and it’s no coincidence that great victories can be achieved in the name of Islam and with the motivation brought on by the holy month of Ramadan.

What Makes the Battle Legendary?

If you ever take a moment to think about the factors contributing to such victories, you will find that religion and religious motivation is one of the greatest factors that affect the soldiers and therefore affects the outcome of the battle.

So what does religion have to do with a soldier’s brain activity and physical condition? Does it affect it positively, and how?

Over the course of many years and extensive scientific research, scientists have been able to learn a lot, although not yet sufficient knowledge, about the psychology of religion and faith and how that kind of motivation can greatly enhance not only a soldier’s performance during battle, but a normal person’s life.

Various experiments around the world show data and evidence from clinical trials that there exists something bigger than just an association between religion and physical conditions; however, scientists and researchers in the field of psychology are still working extensively to discover more about the mechanism of religion’s physical effects on a soldier’s brain & body.

A soldier at war experiences many feelings and extremely high brain activity. The soldier fights for the country he loves, the religion he defends, and the souls of innocent people that he intends to avenge. The dangerousness of the situation combined with the spiritual elevation which religious motivation initiates will lead the soldier’s Adrenal Gland, which is located above the kidney, to release extensive amounts of Adrenaline, more scientifically known as Epinephrine, into the blood.

It’s a known scientific fact that adrenaline, together with Noradrenaline (Norepinephrine), which is released with adrenaline, can help increase heartbeats rate, enhance and raise rate of respiration, dilate the pupils, and most importantly let muscles contract beyond normal limits during calm or natural state, by allowing more blood to flow, thus allowing more oxygen to reach the muscles. Those two hormones and neurotransmitters prepare the human body to face whatever danger lies ahead.

To further understand the effect of religion on the brain in times of stress and fear, Andrew Newberg from the University of Pennsylvania conducted a study in which he observed brain scans of people meditating and others who were praying.

He found that the effects of both actions on the brain are the same: they increase activity in the Frontal Lobe of the brain, which can help stabilize emotions and give a person the ability to have stronger control over his/her feelings.

Reflecting this piece of information in studying a soldier’s situation on battleground, facing injury and death, what can help keep feelings of fear and despair at bay? Newberg’s findings show that religion can lower a person’s feelings of depression and anxiety. At times of severe stress, religion can help silence negative thoughts and keep the mind focused and in control. 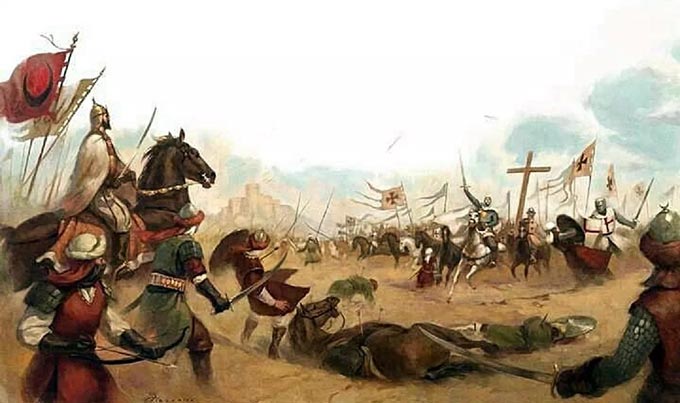 Neurological Effects of Religion in Forming a Fighter Spirit

In a less spur-of-the-moment side of effects of religion, we can draw an association between religious habits usually taken up by any religious person and how those habits can affect health and alter a lifestyle, thus affecting the reaction to dangerous situations in the future.

Islamic teachings include banning of alcoholic habits, smoking, and other forms of substance abuse and habits that can harm the human body.

The absence or lessening of these habits contributes to an overall better health condition: it has widely positive effects on the immune system, and also enhances cardiovascular processes while lessening risks of heart and liver diseases and cancer.

Spiritually and psychologically, religion can prepare the soldier to be selfless and ready to accept whatever results happen during the battle. It inflicts a change on a person’s view of death especially at a war where a soldier fights for reasons he believes are noble and are worth dying for.

Religion helps ease the thought of dying for a cause, with the promise of a reward and knowing that one’s death is for the sake of a greater good. Religion and faith don’t only do wonders for a soldier in uniform and in the battlefield. In many ways, each and every one of us is a soldier in a uniform and fighting a different kind of battle in life. What makes a person, fighter or not, able to overcome hardships and win the many battles life throws at us on daily basis, is how strong the person is and how much faith in God is carved into his/her heart.

It is definitely and scientifically proven to be one of the most powerful weapons anyone can have to overcome any crisis beginning from mental illness and other diseases to the most little of choices we are faced with in everyday life.