Depression is what psychologists call a syndrome: a group of signs (things that a clinical practitioner finds through examination) and symptoms (things the patient experiences) that form a pattern. [1]

Scientists have come up with nine classic symptoms that indicate depression. The first two are used in diagnosing depression.

Sonja Lyuobomirsky, a clinical psychologist, writes in her book The How of Happiness, “Full-fledged depression involves your whole body: your feelings (e.g. ‘I feel wretched’), your thoughts (e.g. ‘I’m ugly’) and your physical state (e.g. ‘I can’t sleep’).” [2]

A study was conducted on Muslims who fasted during the month of Ramadan. The subjects were found to have a decreased anxiety and, in those with bipolar affective disorder, a reduction of both manic and depressive symptoms.

A study by Michaelson et. al. in 2009 showed that therapeutic fasting alleviates symptoms of depression and improves anxiety in 80% of chronic pain patients after just a few days.

The mechanism behind this isn’t known, but it might be linked to the release of endorphins in the first 48 hours of fasting.

Similar to a runner’s high, endorphins, which resemble opiate drugs, make you feel good in response to a metabolically stressful event.

Another study by Fond et al. concluded, “Many clinical observations relate an early (between day two and day seven) effect of fasting on depressive symptoms with an improvement in mood, alertness and a sense of tranquility reported by patients. The persistence of mood improvement over time remains to be determined.”

A study on Iranian students reported that participants who fasted the whole month of Ramadan, even for amusement, had higher scores on all the mental health subscales after Ramadan than those who didn’t fast at all. 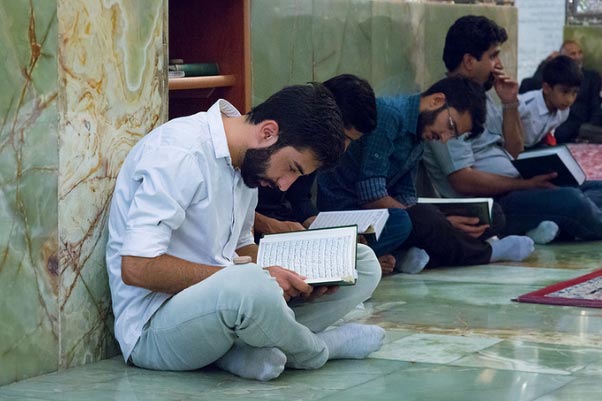 Muslims are involved in other activities in Ramadan that may boost mood and happiness. Acts of charity are a common practice during the month of Ramadan.

Lyubomirsky writes that scientific research has given evidence that “practicing acts of kindness is not only good for the recipient but also for the doer. It may be ironic, but being kind and good even when it’s unpleasant or when one expects or receives nothing in return may also be in the doer’s self-interest. This is because being generous and willing to share makes people happy.” [3]

Ramadan is also a time when Muslims are more involved in religious rituals and worship.

Alongside the fasting, many more Muslims frequent the mosques for the five daily prayers and also for the optional night prayers of Ramadan.

Lyubomirsky says that scientists have generally been reluctant to study spirituality and God.

However, she notes that those who have delved into this subject and conducted research show that people who attend religious services frequently and who reported religion as being important to them recovered better from the loss of a child and had less depressive symptoms than parents who weren’t religious.

Lyubomirsky also says that research shows that “people who actively and publicly participate in religious activities (e.g. attending church or praying) are happier than those who simply espouse religious beliefs.”

There are many studies on fasting and the ritual practices of Ramadan. There are yet others that look at how fasting, prayer and religious practice help people in depression.

Nevertheless, studies that specifically investigate the effect of Ramadan as a whole on depression and mental health are called for.