Title: The Quran and Modern Science: Compatible or Incompatible?

(This is the Book; in it is guidance sure, without doubt, to those who fear Allah.) [Surat Al-Baqarah, 2:2].

The Qur’an, the holy book of Islam, is that scripture which is full of verses that urge and invite human beings to think, look, know, examine, study and observe the entire universe we’re living in; from small creatures like ants and bees, to the stars and our immense universe.

A “strong Muslim” is the person who is not only physically strong, but also mentally capable to defend himself with sound knowledge, and protect Islam through well-being and welfare which are achieved by advancement, improvements and scientific progress.

In this series of scientific signs in the Holy Qur’an, Aboutislam.net neither aims proving God’s existence through science nor proving the Qur’an’s authenticity through scientific facts. Our purpose is to introduce this topic with the aim of awakening sleeping souls and materialist minds.

In his book, “The Quran and Modern Science: Compatible or Incompatible?” Dr. Zakir Naik stated clearly in the introduction of his well-distributed book that his thoughts are based upon the fact that our Holy Qur’an isn’t a science textbook, but that it includes scientific signs from God to mankind.

Since science normally takes several U-turns throughout its history, forth and backwards between its theories because it’s created by humans, we must not attach it blindly to something stable, fixed, divine and made by God.

Dr. Zakir assured that he has only considered established scientific facts and not mere hypotheses or theories that are based on assumptions and are not backed by proof.

This renowned Muslim scholar, who is the Founder and President of the Islamic Research Foundation (IRF), presented his book in twelve chapters discussing scientific signs in several fields.

Signs Up in the Heavens 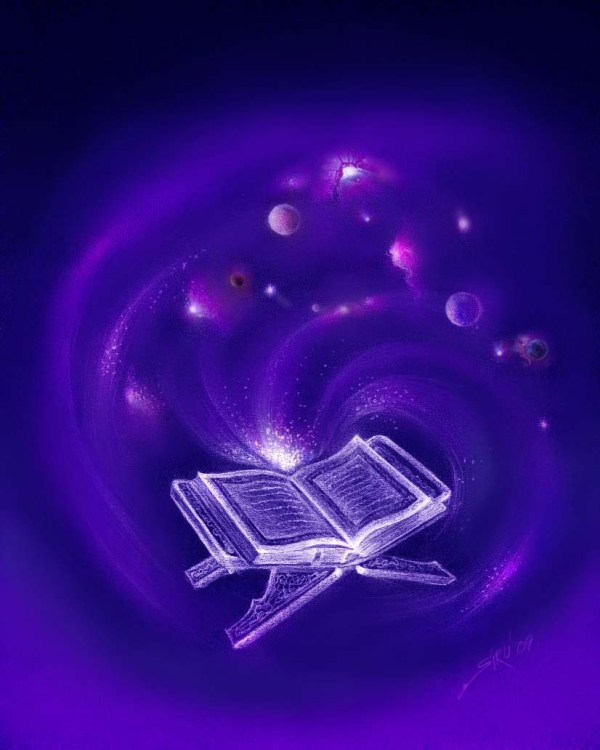 The author started with astronomy which indeed occupies a significant portion in the Holy Book with numerous verses mentioning astronomical facts.

The author started with astronomy which indeed occupies a significant portion in the Holy Book with numerous verses mentioning astronomical facts.

He mentioned some interesting astronomical signs like for example the gaseous origin of our galaxies which are what we currently call “Nebulas” or “Nebulae”, those really huge clouds of hot gases distributed and scattered here and there in the vast observable cosmos.

These enormous gaseous clouds form afterwards the celestial objects we know through physical and chemical reactions.

Other points in the chapter on astronomy included the spheroid egg-shape of Planet Earth, the continuous overlapping of day and night, the physical difference between luminosity of shining light sources like stars (The Sun), and the reflectors “dim celestial bodies” (The Moon).

Dr. Zakir has also discussed other good signs such as: solar rotation, solar apex and antapex.

It would however been better if Dr. Zakir started his astronomy chapter with another point rather than the point of “Creation of the Universe: The Big Bang”.

No doubt that the Big Bang is the widely accepted theory on the creation of the universe among the majority of cosmologists, but despite the fact that it’s backed by several scientific proofs, no one can deny that this theory was and is still facing endless unanswered questions.

Moreover, the fields of physics and astronomy don’t have a problem welcoming the newcomer theory “String Theory” which may cause the retirement of the Big Bang in the coming few years.

His analysis regarding this was good, but on the opposite side some other Muslim scholars take these mentioned verses as evidence on the solar orbit around the Milky Way’s galactic centre of gravitation, and not a matter of solar age, or stellar evolution, and the definite death of our sun.

At the same time, orientalists claim that the point of giving a hint about the death of the Sun is a matter of common sense and an estimation which could be done by “astrologers”. I believe Dr. Zakir should have had responded to these issues in his book.

On the issue of “The Expanding Universe”, it would have been more appropriate for Dr. Zakir to mention it to be consistent with verse number 104 in Surat Al-Anbiya’: “The Day when We will fold the heaven like the folding of a [written] sheet for the records. As We began the first creation, We will repeat it. [That is] a promise binding upon Us. Indeed, We will do it.” [Surat Al-Anbiya’: 21:104] which also gives a hint on the mechanism of the end of the universe.

At the same time, he should have made it clear that both verses don’t cause contradiction between the two scientifically defined models of the end of the observable universe which are the “Big Bang” that suggests an end via a Universal Freeze, and the “Big Crunch” which simulates an end through Universal Heat and condensation.

In the chapter on physics, the second part of the book, the author succeeded in presenting verse 3 of Surat Saba’ and verse 61 of Surat Yunus.

But, he should have explained why all classical Qur’an commentators translated the word “Zharrah” as ant, and this includes: At-Tabari, Al-Qurtubi, Ibn Abbas, Al-Baydawi, Al-Jalalayn and Az-Zamakhshari.

This is crucially important because non-believers use this point to claim a contradiction between classical Qur’anic tafsir and the modern scientific signs interpretations.

In the third chapter of the book which tackles the field of Geography, Dr. Zakir divided it into two main sections. The first section presents the “Hydrologic Cycle” on Planet Earth.

The author’s view was fine but it needed more linguistic explanation in order to show that the two verses used and their vocabulary are totally compatible with the known water cycle on the surface of our planet.

The second focus of this chapter deals with impregnating winds, and while Dr. Zakir used it as a proof for rain, water cycle and hydrology, other Muslim scholars use the same verse as evidence on fertilizing plants through pollen grains which transfer by wind, a process called Anemophily. It would therefore have been useful if he referred to the relation between anemophily and impregnating winds.

Is it a Flat Earth?

Dr. Zakir then discusses the topic of mountains in the chapter on Geology.

He presented two good ideas with credible scientific information, yet he missed replying to the claims which say that the Qur’an represents an ancient borrowed pre-Islamic illustration of Flat Earth and not a spheroid one, and hence, according to their claims the Qur’an talked about mountains as pegs in order to stabilize the Flat Earth represented in it and not a spheroid one as explored in modern sciences.

However, Dr. Zakir’s mentioning of Dr. Frank Press’s book “Earth” was an excellent reference of a reliable and an unbiased source.

In the fifth chapter which deals with Oceanology, the author made good linguistic explanations of the Arabic vocabulary of verses 55:19-20, in addition to his perfect quoting from Oceanology publications on the topic of water circulations between water bodies.

The second point regarding the Benthic darkness of deep oceans was perfectly explained by the author via the process of VIBGYOR absorption throughout the sea levels.

After that comes the chapter on Biology, where Dr. Zakir concentrates on the creation of every living organism from water, supported by three verses from the Qur’an, based on physiological and chemical facts.

Countless verses in the Noble Qur’an mention plants and invite us to contemplate these living organisms, and in the seventh chapter on Botany, Dr. Zakir focused on the concept of the universal gender duality which is found among plants, fruits and “everything”.

The author should have replied to the point being raised by opposition that the idea of Universal Duality already predates our Holy Qur’an by thousands of years; such as the “Ying/Yang” notion of Chinese philosophy.

He could have argued that since God is the source of every information and knowledge we have as humans, and since Adam lived thousands of years prior to the Chinese civilization, then the concept of universal gender duality could have been transferred from prophetic teachings from God to Adam and other early prophets like Seth who succeeded him and afterwards the information passed to ancient human civilizations.

Signs in Yourselves and Around You

Furthermore, Dr. Zakir should have also explained that the Qur’anic meaning of gender duality and the existence of male and female genders doesn’t contradict with the known sexual morphologies and types of reproductions in living organisms such as hermaphroditism, unisexuality, bisexuality, asexual reproduction,…etc including the living organisms which lack sexual orientations.

In the eighth chapter, the book discusses Zoology in five points. The best one of these examples was the talking ants, this Qur’anic account of Prophet Solomon understanding the speech of ants, which zoologists have recently proven to be true.

Physiology comes in Dr. Zakir’s tenth chapter through the example of blood circulation and milk production while referring to the discovery of the Muslim physician Ibn al-Nafis who is famously known for describing the pulmonary circulation of the blood in humans.

The field of Embryology was stretched by Dr. Zakir in a chapter of ten topics which discussed several points in human embryology including: embryo and leech-shaped appearance, humans created from nutfah (Minute Quantity of Liquid), fertilization, sex determination of fetus depends on male gamete, and the formation of senses which are mentioned in the Holy Qur’an consecutively with the same sequence in more than one verse.

Dr. Zakir referenced his arguments with the quotes and findings of Dr. Keith Moore, Professor of Embryology, and former Chairman of the Department of Anatomy at the University of Toronto in Canada, and a founder and former president of the American Association of Clinical Anatomists (AACA), as well as Dr. Joe Leigh Simpson, Chairman of the Department of Obstetrics and Gynecology, at the Baylor College of Medicine, Houston, USA, in addition to Dr. Marshall Johnson, the Head of the Department of Anatomy and Director of the Daniel Institute at the Thomas Jefferson University in Philadelphia, USA.

Countless Qur’anic verses from God encourage us to think, learn and study. They impress upon us the Creator’s magnificence, and exhort us to travel and observe the miraculousness of our organs and of creation as a whole.

“Behold! In the creation of the heavens and the earth, and the alternation of night and day – there are indeed signs for men of understanding.” [Suart ‘Ali Imran 3:190].

In light of this, still remains the endless and open-ended debate between Muslim advocates who support scientific interpretations of the Holy Qur’an, and Muslim intellectual opponents who reject attaching the noble scripture with variable and unstable sciences.

Whether through scientific breakthroughs or gaining more religious knowledge, Muslims are always asked to make wining the pleasure of God their top priority, and deep reflection on the Qur’an and its correct understanding is one important path for further spiritual and intellectual growth.

This article was first published in 2003 and is currently for its importance.