In the Qur'anic verse quoted to the right, pomegranates are mentioned as one of the fruits that will be found in paradise
aaa

The pomegranate (ar-Rumman in Arabic), is mentioned thrice in the Qur’an. In the Qur’anic verse quoted to the right, pomegranates are mentioned as one of the fruits that will be found in paradise. This article, the third and final part of a series on Plants in the Qur’an, will discuss the characteristics of this red jewel, grown from China to California.

One of the most fascinating aspects of the pomegranate is the structure inside the fruit. The shiny, leathery skin, once removed, reveals a myriad of cell-like juicy sacs with a “fresh, sweet-sour pleasant taste” (Katzer).

References to the pomegranate are found in many ancient cultures. The Chinese traditionally served pomegranates at weddings, as it was associated with abundance, prosperity and numerous offspring. Pomegranates symbolized fertility and immortality in many cultures.

Ancient Egyptians were buried with pomegranates, while in Greek mythology, the earth goddess, Demeter, is said to have lost her daughter Persephone to the god of the underworld, Hades, because Persephone had accepted one single pomegranate grain.

Hades had abducted the beautiful Persephone and when he was persuaded to release her, he handed her one pomegranate seed which connected her to his realm. Thus, she had to remain with him in the underworld for a portion of the year.

Pomegranates were reportedly grown in the famous Hanging Gardens of Babylon and in Ancient Egypt. During the time of the Prophet Musa (peace be upon him), they were in cultivation throughout Palestine, Syria and Lebanon.

The city of Rimmon, an ancient city believed to have been located close to present-day Hebron, was in fact known for the quality of its pomegranates or rummun, hence its name.

Aesop’s Fables contain an interesting story laced with irony about the proud pomegranate tree, renowned for its beautiful flowers and fruit, arguing with an apple tree over who is more beautiful. 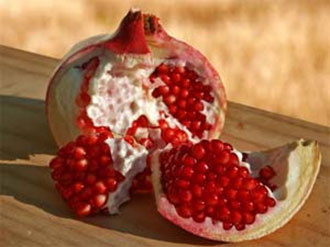 It spread to the Mediterranean basin and even further afield to areas with semi-arid mild temperate and down to sub-tropical climate. It is adapted to regions with cool winters and hot summers.

Pomegranates originate from Iran but have become native to the Himalayan regions as well as Northern India , where it has several culinary uses.

The pomegranate is found in either a small, round shrub or tree form. It is usually between three to six meters in height, but can reach up to nine meters. It is deciduous, meaning that it sheds its leaves, but in certain regions of the world, the leaves remain on the tree (evergreen). The production capacity of the tree declines after approximately 15 years. However, it is a long-living species and some specimens have lived as long as 200 years.

The tree has very attractive flowers that are scarlet, white or a mixture of the two. One of the primary benefits of the pomegranate is its use as a dye. Extracted from its scarlet flowers is a beautiful red dye, which has been used for centuries in Central Asia.

The leaves of the pomegranate are glossy with a tough, leathery texture and are narrow and lance-shaped. The astounding color and pink-red hues of the fruit and flowers of the pomegranate are an attestation to the Qur’anic verse: And whatsoever He has created for you on the earth of varying colors [and qualities from vegetation and fruits] and from animals. Verily! In this is a sign for people who remember. (Surat An-Nahl 16:13).

A distinctive factor of the pomegranate is the structure of its fruit. The nearly round fruit is surrounded by a tough, leathery rind, with a light or deep pink to rich red color. The rind is largely responsible for the storage quality of the fruit, which can be kept for up to six months.

Once the protective rind is removed, the interior is revealed. Separated by “membranous walls and white, spongy bitter tissue into compartments” (California Rare Fruit Growers, 1997), the fruit is packed with sacs that are filled with the juicy red, pink or white pulp or aril. The seeds, which can be hard or soft, are found within the arils. The arils are often incorrectly referred to as pomegranate seeds.

Pomegranate trees may begin to bear fruit one year after planting, though the common period of fruiting starts 2 to 3 years after planting. Eastern markets are the primary destination for pomegranates. 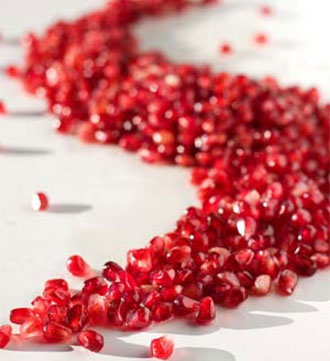 The uses of the pomegranate, as was seen with the two other plants of the Qur’an, dates and olives, are numerous. The fruit is nutritious and has a calorific value of 65.

Its protein and fat contents are insignificant, while it is “a rich source of sodium and also contains a good amount of riboflavin, thiamine, niacin, vitamin C, calcium and phosphorous” (Farooqi, 1997). It is delicious when served slightly chilled.

The juice of the pomegranate is a favorite in many Middle Eastern countries and can be bought from vendors selling the cool, tasty red juice. The juice is also used to make jellies, sauces, flavorants and syrups.

Pomegranate juice is a powerful anti-oxidant. Anti-oxidants guard the body against free radicals, harmful molecules that are believed to contribute to heart disease, premature ageing and cancer.

The dried pomegranate seeds, found within the arils, have culinary importance in North Indian cooking where they are used as a flavorant with vegetables and legumes. These seeds stem from sour varieties whose fruits cannot be eaten raw. Pomegranate seeds are also substituted for raisins in cakes and other European sweets.

Pomegranates are used medicinally for diarrhea, earache, bad vision, fevers, teeth and gum disorders and indigestion according to Unani Tibb medicine.Apart from its nutritious value, the pomegranate also has medical benefits. It is commonly prescribed under the homeopathic as well as the Unani Tibb medical systems.

Unani Tibb, with roots in Greek, Egyptian, Arabic and Indian medicine, is a healing system based on scientific data and holistic principles, while homeopathy is a system of medicine that is based on natural laws applied therapeutically some 200 years ago.

Traditional Sri Lankan plant-based remedies include boiling the buds of the pomegranate tree and taking it as a tea to treat either diarrhea or bronchitis. The beautiful flowers of the tree are also used to relieve sore eyes.

Pomegranates, along with dates and olives, are also mentioned in the following verse from the Holy Qur’an, which speaks of the dues that have to be paid upon each harvest, as well as the evil of wastefulness.

And it is He Who produces gardens trellised and untrellised, And date-palms, and crops of different shape and taste and olives, and pomegranates, similar (in kind) and different (in taste). Eat of their fruits when they ripen, but pay the due thereof on the day of its harvest, And waste not by extravagance. Verily, He likes not those who waste by extravagance. (Surat Al-Anʻam 6:141).

The plant kingdom, ‘the beautiful garments of the earth’, is one of the blessings of Allah. The Qur’an deals with many species of plants, such as the grape, fig, ginger, cucumber, garlic, lentils and the tooth brush tree (siw?k). Agricultural crops, grains, seeds and fodder are also mentioned. Moreover the Qur’an speaks of the pollination, reproductive and germination processes of the plant kingdom.

Plants, along with all of creation, essentially fulfill two key functions. They are living beings in their own right, worshipping and glorifying Allah in a manner that we cannot perceive. They have also been placed on Earth for the benefit of human and animal life, so beautifully illustrated in Surah ‘Abasa: Then let man look at his food: We pour forth water in abundance. And we split the earth in clefts. And we cause therein the grain to grow, And grapes and clover plants, And olives and date palms, And gardens with many dense trees, And fruits and herbage (To be) a provision and benefit for you and your cattle. (Surat ʻAbasa 80:24-32).

Half of the medicines in the world are derived from plants and 80% of the world’s population relies for their primary health care on traditional remedies sourced from the plant, animal and mineral kingdoms (Plant Talk).

Though a large percentage of the plants in the world remain undescribed and their benefits undiscovered, close to 40,000 plant species are threatened according to the World Conservation Union’s (IUCN) 1997 and 2003 Red List of Threatened Species.

Let us take a lesson from the Prophet Muhammad (PBUH) who is reported to have said: Narrated Anas bin Malik (may Allah be pleased with him): Allah’s Messenger (SAW) said, “There is none amongst the Muslims who plants a tree or sows a seed, and then a bird, or a person or an animal eats from it, but it is regarded as a charitable gift from him.” (Bukhari 40:1071).