“And tall (and stately) palm-trees, with shoots of fruit-stalks piled one over another” (Surat Qaf 50:10). From lush tropical rainforests to stark desert lands, from lofty mountain tops to shimmering seashores, we find an array of plants that scientists have estimated to be in the range of 422,000 species.

The astounding diversity of the plant kingdom, which incorporates trees, flowering plants, ferns, mosses, seaweed and algae, has enthralled botanists for centuries.

This diversity is described in the Qur’an as follows: “And in the earth are neighboring tracts, and gardens of vines, and green crops (fields), and date palms, growing into two or three from a single stem root, or otherwise (one stem root for every palm), watered with the same water; yet some of them We make more excellent than others to eat. Verily! In these things there are signs for the people who understand.”(Surat Ar-Ra’d 13:3).

Plants, the colourful garments of the earth, play a key role in protecting life on this planet. Trees, which cover a third of the earth’s surface, regulate the climate of the earth by absorbing carbon dioxide and releasing oxygen. In addition, plants provide nourishment, medicines, shelter, fuel and clothing to humankind and animals alike. Plants also fulfill a beautifying and decorative function.

Botanical research by Muslim scholars can be traced back to the second year after Hijrah (7th Century AD) when a keen interest developed into the medicinal and agricultural aspects of the floral kingdom.

‘Ilm ul-nabaat, the science of plants, encompassed not only scientific studies that classified and described plants, but also contemplated the spiritual and moral lessons drawn from the plant world.

Plants are regarded as one of the countless favours of Allah. As one reads in Surah Ar-Rahman, “So which of the favors of your Lord will you deny?” (Surat Ar-Rahman 55:13).

If humankind attempted to count the blessings of this one favor of Allah, the plant kingdom, it would not be able to fathom the Greatness of the Creator.

“If we would count up the favors of Allah. Never would ye be able to number them. For Allah is Oft-Forgiving, Most-Merciful.” (Surat Al-Kahf 16:18).

In this three-part series we will draw on the work of Dr. Iqtidar Faruqi’s Plants of the Qur’an to discuss three of the plants mentioned in the Qur’an and look at their characteristics, uses and benefits in our lives. The first of these is the date palm. 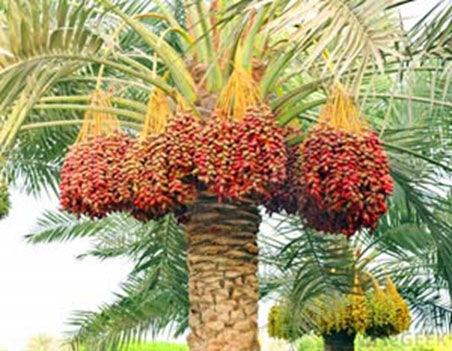 The date palm, mentioned more than any other fruit-bearing plant in the Qur’an, is a symbol often associated with Islam and Muslims. Throughout the month of Ramadan, dates are a common ingredient in the Muslim diet.

The delectable fruit is sourced from the date palms of Iran, Iraq, Saudi Arabia, Egypt and even South Africa. Muslims begin and end their day of fasting with its sweet and nourishing flesh.

Phoenix dactylifera is the botanical name for the date palm. It is also referred to as nakhl in Arabic, while the fruit of the date palm is called tamr in many Arab and African countries.

The date palm is a tall evergreen and consists of both male and female trees (called dioecious). Only the female trees produce fruit, but one male tree can produce enough pollen to pollinate 40-50 female trees.

At Times of War

Prior to the advent of Islam, date palms, particularly the highly valued male trees, were often cut down and destroyed in battles between tribes. However, this practice was strongly discouraged by the Prophet (peace and blessings of Allah be upon him) and subsequent leaders and viewed as an act of “sacrilege on this earth” (Farooqi, 1997).

During military expeditions, soldiers were instructed not to harm innocent people, nor to cut down any vegetation. However, during the siege of the Banu Nadir tribe in Madinah, Muslims were forced to cut down date palms to “facilitate the movement of the army” (Farooqi, 1997).

The Banu Nadir were angry and wanted to know how the Prophet, “who always forbade corruption and injustice and castigated their perpetrators” (Haykal, 1990), could command the destruction of their orchards. This act greatly saddened the Muslims but was deemed necessary. A verse was revealed at this time that indicated the permissibility of their action in these circumstances.

“And what you (O Muslims) cut down of the palm-trees (of the enemy), or you left them standing on their stems, it was by leave of Allah, and in order that He might disgrace the Fasiqun (the rebellious, disobedient to Allah).” (Surat Al-Hashr 59:5).

The date palm, which is most commonly unbranched, can grow up to 30 meters. Its 4-5 meter long leaves surround the trunk in a spiral pattern. Branched forms of the date palm also occur (See Surah Ar-Ra’d above).

Date palms produce between five and ten bunches of dates per tree. A single large bunch may contain more than a thousand dates, and can weigh between 6 to 8 kg. They begin to bear fruit at 3 to 5 years, and reach full production after 10-12 years. Date palms can survive up to 150 years.

Date fruits vary in size, shape and colour. This drupe fruit is characterised by its thin skin, succulent, soft flesh and hard stone or seed in the middle. Unripe dates are green in colour, maturing to yellow, then reddish-brown when fully ripe. Each of these states (green to ripe) has been given a particular name in Arabic.

The tree is grown in a nearly rainless belt in the Sahara, as well as in the Middle East in countries such as Saudi Arabia, Jordan, Iran and Iraq. The variety of dates that are produced amount to 600 according to a report by the Agronomy and Range Science Management Department at the University of California.

In three date-producing countries, Morocco, Tunisia and Algeria, there is reported to be about 1,000 varieties of dates, many of which experience neglect and face possible extinction as efforts are concentrated on prized varieties (Campbell).

The date market in the noble city of Madinah, the Souq al-Tumour, sells about 150 varieties, differing in color, shape, taste and price! 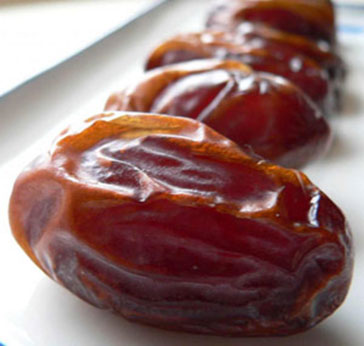 The date palm has a range of uses. High-energy date fruits have been placed high on the diets of the health conscious. Though the fruit still has untapped potential in the food industry, it also lends itself to countless other uses.

Handicrafts, such as ropes and mats can be woven from the branches of the tree, while the bark is very useful as a building material.

In early descriptions of the Prophet Muhammad’s (SAW) mosque in Madinah, historians state that the leaves of the date palm were used as a roof covering.

Even the date stone is used as cattle feed, once it has been soaked and powdered. The juice from the date palm is an ingredient in baking and cooking.

Placed in the mouths of newborn babies, eaten at wedding celebrations and at the beginning and end of each day of fasting in Ramadan – dates are said to have great medicinal value. A medical study cited in the British Medical Journal (Haouari et al.) found that placing a sugary substance in the mouth of a baby reduces pain sensation and heart rate.

The sunnah (Prophetic tradition) of putting chewed dates or honey into the mouths of newborn babies at the name-giving ceremony on the 7th day after the child’s birth therefore carries great virtue and benefit.

According to a study by Al-Shahib and Marshall, in many ways, “dates may be considered as an almost ideal food, providing a wide range of essential nutrients and potential health benefits.”

The sugar content of ripe dates is about 80%; the remainder consists of protein, fat and mineral products including copper, sulfur, iron, magnesium and fluoric acid. Dates are high in fiber and an excellent source of potassium.

World production of dates has almost tripled, while export has increased by 1.71% in the last 40 years indicating an increase in the demand for this nutritious fruit.

Dates are also reputed to be useful in treating respiratory disorders, as well as a salve and a heart stimulant. It is also believed to be of benefit to pregnant women. In Surat Maryam, Allah provided Maryam (peace be upon her), the mother of Prophet ‘Eesa (peace be upon him), with dates when she was experiencing discomfort and pain during the final stages of her pregnancy.

“And shake towards thyself the trunk of the palm- tree It will let fall fresh ripe dates upon thee.” (Surat Maryam 19:25). 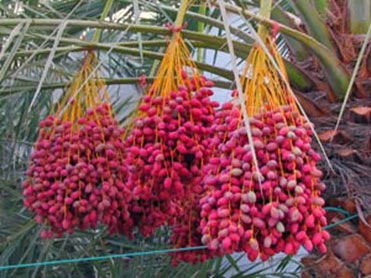 In an article discussing the benefits of dates, Omar-Muhammad (2003) states that studies have shown that “dates contain certain stimulants which strengthen the muscles of the uterus in the last few months of pregnancy.”

This would then assist in the dilation of the uterus at the time of delivery. Dates are also recommended for women in the post-partum period and lactating due to its value as a nutritious, high-energy food.

The value of the date palm is still being understood. As an old Arab saying goes: The uses of the date palm are as many as the number of days in the year. The date palm is one of the many bounties that have been placed on this earth for us to benefit from. Next time we will look at az-Zaytoon, the olive, also discussed in the book, Plants of the Qur’an.